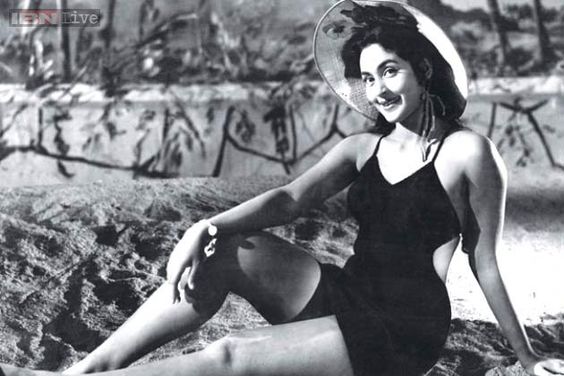 Agency.Nutan Behl 4 June 1936 – better known as Nutan,was an actress. She appeared in more than 70 Hindi films in a career spanning over four decades. Regarded as one of the finest female actors in the history of Hindi cinema,Nutan was noted for playing unconventional parts, and her performances often received praise and accolades.Nutan started her career at the age of 14 in the 1950 film Hamari Beti, directed by her mother Shobhna Samarth. She subsequently starred in such films as Nagina and Humlog (both 1951). Her role in Seema (1955) garnered her wider recognition and a Filmfare Award for Best Actress. She continued playing leading roles through the 1960s until the late 1970s and went on win the award on four other occasions for her roles in Sujata (1959), Bandini (1963), Milan (1967) and Main Tulsi Tere Aangan Ki (1978). Some of her other films of this period include Sone Ki Chidiya (1958), Anari (1959), Chhalia (1960), Tere Ghar Ke Saamne (1963), Saraswatichandra (1968), Anuraag (1972) and Saudagar (1973).In the 1980s, Nutan started playing character roles and continued working until shortly before her death. She portrayed mostly motherly roles in such films as Saajan Ki Saheli (1981), Meri Jung (1985) and Naam (1986). Her performance in Meri Jung earned her a sixth and last Filmfare Award, this time in the Best Supporting Actress category. Nutan holds the record of five wins of the Best Actress Award at Filmfare, which was held only by her for over 30 years until it was matched by her niece Kajol in 2011; she is overall the most-awarded actress in the female acting categories at Filmfare, with six awards alongside Jaya Bachchan.In 1974, she was awarded the Padma Shri by the Government of India.Nutan was married to Rajnish Behl from 1959 till her death of cancer in 1991. Their son, Mohnish Behl is a character actor in Hindi films and television.Nutan was born into a Marathi family of four children as Nutan Samarth to director-poet Kumarsen Samarth and his actress wife Shobhna Samarth. Nutan was the eldest child of actress Shobhna Samarth. She had three other siblings, 2 younger sisters and a younger brother. Her younger sister Tanuja is also an actress, and Chatura, who did not work in Bollywood. Her parents separated when she was still a child. Kajol, Tanuja’s daughter, is an actress.Nutan is related to many of the screen stars of the past fifty years .She started her career as actress as a fourteen-year-old in Hamari Beti (1950). This film was produced by her mother, Shobhana. In 1952 she was the winner of Miss India.Her first big break was Seema, for which she won her first Filmfare Best Actress Award. She followed her success with a romantic comedy, Paying Guest, in which she co-starred with Dev Anand. In 1959 she starred in two hit films, Anari (with Raj Kapoor) and Bimal Roy’s Sujata (with Sunil Dutt). In the 1960s and 1970s she had many more successful films including Chhalia (1960), Saraswatichandra (1968), Devi (1970) and Main Tulsi Tere Aangan Ki (1978).In 1960 she starred opposite Raj Kapoor once again in Manmohan Desai’s Chhalia. She received another Filmfare nomination for the role. She formed a popular screen couple with co-star Dev Anand and the two acted in four films together – Paying Guest (1957), Baarish (1957), Manzil (1960) and Tere Ghar Ke Samne (1963).In 1963, Nutan starred in Bimal Roy’s socio-realist Bandini as Kalyani, a young prisoner who was convicted after poisoning the wife of her lover (Ashok Kumar). The story follows her life in prison and how later she has to make a choice between her past love and a young prison doctor (Dharmendra) who fell in love with her. Nutan had to be persuated to act in the film as she had quit acting post marriage. Bandini was a major critical success, which was attributed by critics mostly to Nutan’s portrayal, which regarded as one of the finest performances in the history of Hindi cinema.The film won the Filmfare Award for Best Movie and she received her third Best Actress Award. The Bengal Film Journalists’ Association, while ranking the film as the third-best Indian film of the year, acknowledged her with the Best Actress (Hindi section) award.Her fourth Filmfare Award came for Milan (1967). She starred opposite Amitabh Bachchan in 1973’s Saudagar (1973), for which she received a sixth Filmfare nomination and a third BFJA award. In 1978, she made an astonishing return to the screen as the righteous Sanjukta Chauhan in Main Tulsi Tere Aangan Ki (1978). For this performance, she received an eighth Filmfare career nomination and won her fifth Filmfare best actress award, at the age of 42. She thus became a record holder in the category, having won five award for Best Actress at Filmfare. At age 42, she is also the oldest winner of the award. Nutan was perhaps the only actress of her generation to command leading roles in her 40s, with tremendous success. Following this, she starred in Saajan ki Saheli (1981), as an ignorant, jealous wife to a husband who knowingly befriends the daughter she abandoned at childbirth.In the remaining 1980s she played roles in blockbuster films such as Meri Jung (1985), Naam (1986) and Karma (1986). Karma was notable for being the first time she was paired with actor Dilip Kumar. For Mere Jung she won a Filmfare Award for Best Supporting Actress. Her last film released while she was alive was Kanoon Apna Apna in 1989. She died in 1991 of cancer. Two of her films Naseebwala (1992) and Insaniyat (1994) were released after her death.Nutan was noted for her willingness to play unconventional roles and several of her roles were labelled “path-breaking”.Actresses like Sadhana and Smita Patil noted Nutan as their influence.Sadhana was once quoted as saying, “If there was any actress I modelled myself in the lines of it was the versatile Nutan in Seema, Sujata and Bandini. Parakh was a film where I really followed Nutan.
On 11 October 1959, she married naval Lieutenant-Commander Rajnish Behl. Their son, Mohnish Behl, born in 1963, later entered films as well.Nutan died in 21 February 1991, of cancer, at the age of 54.