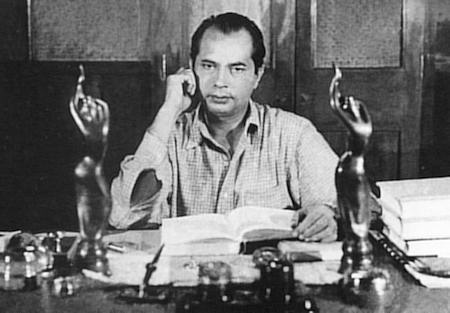 Agency.Bimal Roy  was one of the most acclaimed  film directors of all time. He is particularly noted for his realistic and socialistic films like Do Bigha Zamin, Parineeta, Biraj Bahu, Madhumati, Sujata, and Bandini, making him an important director of Hindi cinema. Inspired by Italian neo-realistic cinema, he made Do Bigha Zameen after watching, Vittorio De Sica’s Bicycle Thieves (1948).His work is particularly known for his mise en scène, which he employed to portray realism. He won a number of awards throughout his career, including eleven Filmfare Awards, two National Film Awards, and the International Prize of the Cannes Film Festival. Madhumati won 9 Filmfare Awards in 1958, a record held for 37 years.Bimal Roy was born on 12 July 1909, to a zamindar family in Suapur, then part of the Bengal province of British India and now part of Bangladesh. Bimal Roy moved to the Calcutta and entered the field of cinema as a camera assistant with New Theatres Pvt. Ltd. During this time, he assisted director P.C. Barua on the hit 1935 film Devdas, starring K.L. Saigal. In the 1940s and 1950s Roy was part of the parallel cinema movement in post-war India. He was famous for his romantic-realist melodramas that took on important social issues while still being entertaining. He was a filmmaker of great and indepth understanding of human strengths and weaknesses. In 1959, he was a member of the jury at the 1st Moscow International Film Festival.He died of cancer at the age of 56.Bimal Roy’s influence was far-reaching, both in Indian cinema and world cinema. In Indian cinema, his influence extended to both mainstream commercial Hindi cinema and the emerging Parallel Cinema. His film Two Acres of Land (1953) was the first film to successfully stradle art and commercial cinema. It was a commercial and critical success, winning the International Prize at the 1954 Cannes Film Festival. The film’s success paved the way for the Indian New Wave as a result.In commercial cinema, the most influential film he directed was perhaps Madhumati (1958), his first and only collaboration with Ritwik Ghatak (who wrote the screenplay) and one of the earliest films to deal with reincarnation. It is believed to have been the source of inspiration for many later works dealing with the theme of reincarnation in Indian cinema, Indian television, and perhaps world cinema. It may have been the source of inspiration for the American film The Reincarnation of Peter Proud (1975) and the Hindi film Karz (1980), both of which dealt with reincarnation and have been influential in their respective cultures.Karz in particular was remade several times: as the Kannada film Yuga Purusha (1989), the Tamil film Enakkul Oruvan (1984), and more recently the Bollywood film Karzzzz (2008). Karz may have also inspired the American film Chances Are (1989).The most recent film to be directly inspired by Madhumati is the hit Bollywood film Om Shanti Om (2007), which led to Roy’s daughter Rinki Bhattacharya accusing the film of plagiarism and threatening legal action against its producers.Bimal Roy’s films continue to be screened at major national and international film festivals in India, Europe and North America. His films are currently being restored and digitized by the National Film Archives of India (NFAI) at Pune.