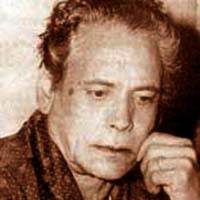 Hasrat Jaipuri was a Hindi and Urdu poet and film lyricist in Hindi films, where he won the Filmfare Awards for Best Lyricist twice.

Hasrat Jaipuri was born Iqbal Husain in 15 April 1922 Jaipur, where he studied English till medium level, and then acquired his taalim in Urdu and Persian from his paternal grandfather, Fida Husain.He began writing verse, when he was around twenty years old. Around same time, he fell in love with a Hindu girl named Radha. He wrote a poem for her, “Yeh Mera prem Patra Padh Karke Tum Naaraaz Na Hona”. Later, the poem was used as a song in Raj Kapoor’s film, Sangam (1964).In 1940, Jaipuri came to Bombay (now Mumbai), and started wroking as a bus conductor, earning a monthly salary of eleven rupees. He used to participate in mushairas. At a mushaira, Prithviraj Kapoor noticed Jaipuri and recommended him to his son, Raj Kapoor. Raj Kapoor was planning a musical love story, Barsaat (1949) with Shankar-Jaikishan. Jaipuri wrote his first recorded song, Jiya Beqaraar Hai for the film. His second song (and first duet) was Chhod Gaye Baalam.Along with Shailendra, Jaipuri wrote lyrics for all Raj Kapoor films till 1971. After the death of Jaikishan and failures of Mera Naam Joker and Kal Aaj Aur Kal, however, Raj Kapoor turned to other lyricists and music directors. Kapoor initially wanted to call him back for Prem Rog, but later settled for another lyricist, Amir Qazalbash. Kapoor finally asked him to write lyrics for the film, Ram Teri Ganga Maili. Later, he also invited him to write three songs for the movie Henna. Jaipuri alleges that after Raj Kapoor’s death, the music composer Ravindra Jain “conspired” to “scrap” his lyrics and replace them with his own lyrics.When fellow lyricist Shailendra turned producer with Teesri Kasam, he invited Jaipuri to write lyrics for the movie. He also wrote screenplay for the movie Hulchul (1951). His last film as a lyricist was Hatya: The Murder (2004).Jaipuri invested his earnings in property, on his wife’s advice. Thanks to earnings from these properties, his financial condition was sound, and therefore he was not much active as a lyricist. He was survived by two sons and a daughter live in Mumbai.Hasrat Jaipuri was died on 17 September 1999.