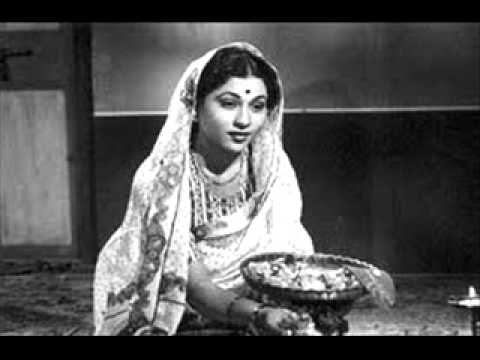 Nirupa Roy  was an actress who appeared in Hindi films. Roy was mostly known for portraying character roles of the mother. She played leading roles in her early films and started playing mother roles during the 1970s–80s. Her acting career spanned more than 50 years, and she acted in more than 250 films. She was referred to as the “queen of misery” in Hindi film circles.In 1946, Roy and her husband responded to an advertisement in a Gujarati paper looking for actors. She was selected and started her acting career with the Gujarati film Ranakdevi. The same year she acted in her first Hindi film, Amar Raj. One of her popular films was Do Bigha Zameen (1953). She largely played mythological characters in the films of the 1940s and 50s. Her image of a goddess was very strong and people would visit her home and seek her blessings.
Among her co-stars were Trilok Kapoor, Bharat Bhushan, Balraj Sahni and Ashok Kumar.
In the 1970s, her roles as mother to the characters played by Amitabh Bachchan and Shashi Kapoor made her name synonymous to the impoverished suffering mother. Her role in Deewar (1975) and its dialogues with reference to a mother and son are used as clichés. She often lost her kids in her movies and was given the worst babysitter award in MTV Fully Faltoo awards. She is considered as one of the best character artistes in Indian cinema.Nirupa Roy was born ((4 January 1931) Kokila Kishorechandra Bulsara in Valsad, Gujarat.
She was married to Kamal Roy when she was 15 and moved to Mumbai. They have two sons, Yogesh and Kiran. She was very friendly with actress Shyama.
She died, after having a cardiac arrest, in Mumbai on 13 October 2004 at the age of 72. She was regarded as the greatest “Maa” of all times in Bollywood.She was Gujarati and taught children Gujarati before she acted in films.