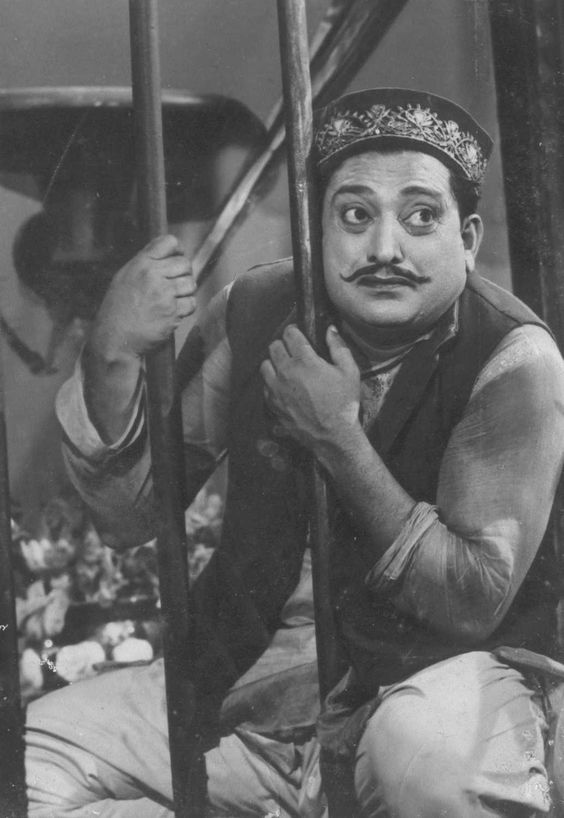 Bhagwan Dada (1 August 1913 – 4 February 2002) was an actor and film director. He is best known for his social film Albela.Bhagwan Dada was born in 1913 as Bhagwan Abhaji Palav. He was the son of a textile mill worker but was obsessed with films. He worked as a labourer but dreamt of films. He got his break with bit roles in silent films and got totally involved with the studios. He learnt film making and at one stage used to make low budget films (in which he arranged for everything including the design of costumes and arranging meals for the cast) for Rs 65000 (at that time US$ = Rs.5-6 so roughly $10000 to 11000 – that’s 1US$ = Rs.50 as per today’s conversion).Bhagwan Abhaji Palav, popularly known as Bhagwan dada, mainly due to his love for wrestling, made his debut in silent era with the film Criminal.He co-directed his first film Bahadur Kisan with Pawar in 1938. From 1938 to 1949 he directed a string of low budget stunt and action films that were popular with the working classes. He usually played a naive simpleton. One of the notable films that he made during this period was the Tamil film Vana Mohini (1941) that starred M. K. Radha and Sri Lankan actress Thavamani Devi.In 1942, as part of a scene, he had to slap actress Lalita Pawar hard. He accidentally slapped her very hard, which resulted in facial paralysis and a burst left eye vein.Three years of treatment later Pawar was left with a defective left eye.He turned producer in 1942 with Jagruti Pictures and owned Jagriti Studios in Chembur in 1947. On advice from Raj Kapoor he turned to making a social film called Albela starring Bhagwan and Geeta Bali, and featuring music by his friend Chitalkar, or C. Ramchandra. The songs of the film, in particular “Shola jo bhadke” are still remembered. Albela was a huge hit. After Albela, C Ramchandra and Geeta Bali got together again in Jhamela and La’Bela but they both flopped.1956 – Lyricists Anand Bakshi got his first break in films when Actor Producer Bhagwan Dada signed him for four songs for Brij Mohan’s film, “Bhala Aadmi”, in 1956, a stunt film. later when Bakshi saw his name in the films credits, he cried in happiness. He was also paid (Rs. 150/- ) for his first 4 songs. His first recorded song was – “Dharti Ke Laal Na Kar Itna Malaal, Dharti tere Liye Tu Dharti Ke Liye.” (Anand Bakshi once again began his struggle when he arrived in Bombay to find work in films the 2nd time – in October 1956, meeting people, hopping from one studio to another. To make matters worse, his money ran out in three months, “I was at the end of my tether,” he grins today, “I didn’t know what to do. I thought I should return home. But I was embarrassed. What would my family say?” Then Bakshi heard that Bhagwan Dada was launching a film, ‘BHALA AADMI’. “I went to his office at Dadar”, Bakshi flashbacks. “I told him I was a song-writer. Right away he asked me to write four songs. I was paid Rs 150 for those songs. It was a whopping sum those days. Recorded 1st song on 9.11.1956.” – Anand Bakshi said in a press print interview.)After the success of “Jab Jab Phool Khile”, Bhagwan dada met Anand Bakshi in a big film party, and advised him, “Bakshi saheb, Khushi Ki Baat hai, Aap ka naam ho gaya hai. Magar ek baat yaad rakhna, ke yahan film industry mein aadmi ko naam se zyada uss ka kaam zinda rakhta hai.” Bakshi never ever forgot that golden advice. Anand Bakshi went on to write almost 3500 Hindi film lyrics for almost 650 Hindi films from 1956 to 2008 and beyond.After that Bhagwan did not have any more hits and eventually had to give up producing and directing films, sell his bungalow and cars and move to a chawl. He took whatever roles he could get, but apart from Jhanak Jhanak Payal Baje and Chori Chori, none were roles of note, and he eventually took on bit parts in which he did his famous dance (made even more famous by Amitabh Bachchan using it as his default dance step).Most of Bhagwan’s associates left him in his time of need, apart from C. Ramchandra, Om Prakash and lyricist Rajinder Krishan, who continued to meet him even in his chawl. Bhagwan died of a massive heart attack at his residence in Dadar in 2002 at age 89. All his friends died long before him.