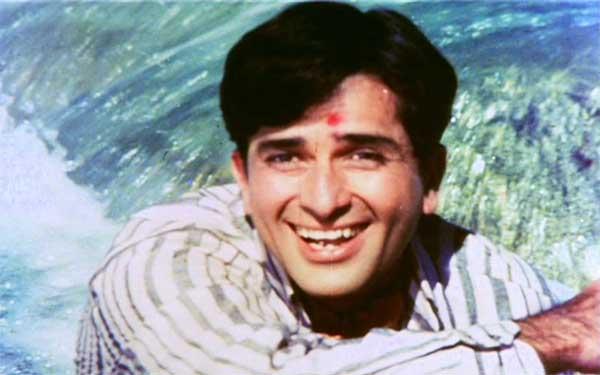 Indian actor of Bollywood, Parallel Cinema, and International productions; Shashi Kapoor is the youngest son of theater and film actor Prithviraj Kapoor and his wife Ramsarni “Rama” Mehra Kapoor. Shashi grew up traveling around the country with his father’s acting trope “Prithvi Theatres.” from 1940-59. He began appearing on stage from the age of four. He also began working in films in the early 1940s. As a child, he appeared in 4 films from 1948-53 which includes 2 films of his eldest brother Raj Kapoor as the hero and Sangram, where Shashi played Ashok Kumar.

By 1956, an 18-year old Shashi was both actor and assistant stage manager for “Prithvi Theatre.” That year, “Shakespeareana” –a traveling theater group under English actor Geoffrey Kendal, and “Prithvi Theatre” were both booked to play in Calcutta. While checking the audience reaction from backstage, Shashi’s glance fell on Jennifer Kendal. Shashi soon learned she was playing Miranda in “The Tempest,” and secured an introduction. The two began courting, and expressed a desire to wed. Geoffrey Kendal was uncertain about loosing not only his daughter, but his leading lady and theater manager. He insisted that the couple wait at least two years. Shashi began touring with “Shakespeareana” and in 1958 he again asked for Jennifer’s hand in marriage and was again refused. However, Jennifer decided to go against her father’s wishes, and in July of 1958, the couple were married in the traditional Indian style in Bombay.

Shashi debuted as a leading man in Yash Chopra’s Dharmputra (1961). From 1961-64 his Hindi films with him as the solo heroes were box office flops. But Nanda believed that Shashi does have the potential to be popular leading man and signed happily 8 films opposite him over the period 1962-1968. Except for their first 2 films together and Juaari, other 5 films of the pair Nanda-Shashi turned out to be super-hits from 1965-70.A versatile actor, Shashi worked in both mainstream popular Hindi cinema, art films and in Indian-set English-language films, such as those made by the film-making team Ismail Merchant and James Ivory. He was one of the first Indian stars to go international, as he worked in both British and American films, and directed the Soviet Union co-production _Ajooba (1991) which was a disaster.He tried his hand at English films when his Hindi films were flops from 1961-64 and achieved success in 1963 with 2 commercially successful English movies.He did 6 English films as lead hero till 1983 and then played villain in Deceivers and another lead role in 1993 and rest 4 English films had him in supporting role as narrator/guest appearance from 1987-1998. Shashi started having solo hits opposite Rakhee, Asha Parekh, Sharmila Tagore, Zeenat Aman from 1968-1975 but had a weak period as a solo lead hero from 1974-1978 where he had 13 flops off 24 films as solo lead and this made him accept multi star cast films from 1976-85. He achieved success in multi star films from 1976-84.In the multi star films he did , he was paid more than co-stars Vinod Khanna, Amitabh Bachchan, Jeetendra, Rishi and Randhir Kapoor. But Sanjeev Kumar,Pran and Dharmendra were paid at same rate as Shashi in the films where they were his co-stars. Only Rajesh Khanna was paid more than Shashi in the 2 films they did together. He played supporting role to Rajesh Khanna at peak of his career in Prem Kahani and then in Alag Alag.

He won the Filmfare Best Supporting Actor Award for Deewaar (1975). He won two Filmfare Best Movie Awards for his work as producer and star of Junoon (1979) and Kalyug (1981).He costarred in 11 films with Amitabh Bachchan of which 4 (Deewar,Trishul, Suhaag,Namak Halal) were successful,1 (Kala Pathar)was average hit and rest 6 were flops. Shashi Kapoor did 61 solo lead hero films in Hindi and, of them, 35 were super-hits. Shashi did 55 multi-star cast movies where Shashi was one of the lead heroes and, of them, 33 were super-hits, 20 were flops, 2 remain unreleased.

Shashi and Jennifer had three children; Kunal Kapoor, an actor and ad director, Karan Kapoor a photographer and sometimes actor, and Sanjana Kapoor, an actress who has run Prithvi Theatre in Mumbai since 1993. After his wife Jennifer died of cancer in 1984, Shashi started becoming obese and began taking on fewer roles in films, and shifted his focus to character roles.His first break as supporting actor after he became obese was given by Rajesh Khanna in film Alag Alag where his role along-with the lead pair of the film was appreciated.

In 2010, Shashi was presented with the Filmfare Lifetime Achievement Award.In 2011, he was honoured with the Padma Bhushan by the Government of India for his contributions to Art-Cinema. In 2015, he was awarded the 2014 Dadasaheb Phalke Award, making him the third member of his family to receive the highest award in Indian Cinema after Prithviraj Kapoor and Raj Kapoor