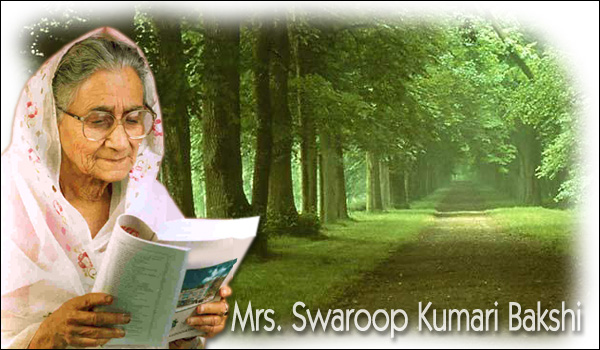 Swaroop Kumari Bakshi was born in Lucknow on 22nd June, 1919 in a Kashmiri Pandit family. Her father Pandit Badri Prasad Shinglu was an outstanding poet in Urdu and English. He was a versatile genius – a scholar, an artist, a top ranking musician and music critic of North Indian classical music. In 1940 she was married to Shri Raj Kumar Bakshi, an advocate and agriculturist, and second cousin of Mrs. Indira Gandhi.
Four generations of Swaroop Kumari Bakshi’s family have served the Congress Party. Her father-in-law’s elder brother Dr. Madan Atal was a freedom fighter. He was also Chairman of the Medical Mission sent to China in 1930. Dr Atal was physician-in-charge of Mrs. Kamla Nehru, when she was lying ill in the Switzerland sanatorium, with Indiraji as a little girl to attend to her. Swaroop Kumari Bakshi’s mother-in-law Dhanraj Pati Bakshi was elected Chairman of the Zila Parishad, Malihabad region, Lucknow. She was lathi-charged during the Simon Commission’s visit to Lucknow and narrowly escaped death.Swaroop Kumari Bakshi did her schooling at Lahore. She did her M.A. in English Literature and in Sanskrit from Lucknow University. She became Principal of Nari Shiksha Niketan Intermediate College (which was later upgraded to a degree college) in 1947 and remained so till 1979.
At the age of ten, Swaroop Kumari Bakshi along with her grand-aunts attended the open session of the All India Congress Committee held in Lahore (29-31 December, 1929) on the banks of the river Ravi. At this historic session, Sri Jawaharlal Nehru, the then President of the Congress, informed the audience that he had sent the first document demanding complete freedom to India to the Viceroy.Swaroop Kumari Bakshi formally joined the Congress party in 1940 and jumped into the freedom struggle. She attended the open session of the All India Congress held at Bombay on 9th August 1942, after which she started taking active part in the Quit India, Satyagraha movement in Lucknow. Along with some girl students she organized picketing strikes in schools and colleges, namely Mahila Girls’ Degree College, K.K.C. and K.K.V colleges and distributed pamphlets demanding freedom in I.T. College, market places and cinema halls. As a result, all the students of K.K.C. and K.K.V colleges came out of their classrooms, and within minutes the Indian Police force along with ‘lathis’ and about a hundred British policemen with their guns pointing at the strikers arrived, ready to shoot at order.Swaroop Kumari Bakshi narrowly escaped death. As a result of her participation in the freedom struggle, her residence ‘19, Station Road, Lucknow’ was cordoned off by local policemen and she was arrested under the Defence of India rules. She was sent to Adarsh Mahila Jail, Lucknow, where she stayed in the barrack for about twenty two days. There she had three freedom fighters as her companions; Smt. Shivrajwati Nehru (aunt of Smt. Indira Gandhi), Smt. Shanta Vaidya and Smt. Asha Tripathi. Smt. Shivrajwati Nehru used to cook and serve food to them like a mother. Each one was given one rupee and eight annas daily for her meals by the jail authorities. Luckily, the jail warden, an Anglo-Indian lady was very sweet and motherly, and used to help them in routine work. Swaroop Kumari Bakshi had very hard times there. She was not allowed to read the newspaper, or any books. She could not meet her family members. She had lost all hope of her life. The jail was like a well of death, but strangely, she never had any sense of fear or depression, or tears in her eyes, as she was living upto her motto “Do or die”.
Sponsored by the Indo-Soviet Cultural Society, Swaroop Kumari Bakshi went to the U.S.S.R. in 1969 as the leader of the Indian Cultural Delegation to participate in the Indian Cultural Festival there. She again visited the nation in 1981, as a member of the Indian Women Delegation. Her name was nominated by the then Prime Minister Smt. Indira Gandhi.She was elected to the Vidhan Sabha from Lucknow (East) on a Congress ticket in 1974, 1977, 1980 and 1985. She was Cabinet Minister, U.P. Govt. for Education, Home, Harijan and Social Welfare and Culture from 1980 to 1989.Under her able leadership as the Education Minister, Dr. Bhim Rao Ambedkar University was established in Lucknow in 1989. It was in a record time (within 24 hours) that the state government passed an ordinance and subsequently the land for the University was purchased. All the formalities were completed within two weeks and the Prime Minister laid the foundation stone. New degree colleges were opened in Jalaun, Mahoba, Lalitpur, Obra, Noida, Jolesar (Etah), Dwarahat (Almora) and Narain Nagar, Didihat (Pithoragarh). Universities of Rohilkhand, Bundelkhand, Garhwal, Kumaon and Faizabad were brought in the grant-in-aid list of the University Grants Commission (UGC). Three year degree courses were introduced in all the state universities. For universalisation of education, plans were drawn up for opening a primary school within a radius of 1.5 km and a junior high school within a radius of 3 km. Every year about 500 such schools were opened. Pioneering work was done in the field of adult education, and enrolment of girls in non-formal education was done on a war footing for which the Union government gave an award to the state. The study of science was made compulsory in the High School syllabus.
It was during her tenure as Home Minister, U.P. that dreaded bandit groups, including those of Chhabiram, Anar Singh, Pothi, Jagatpal Pasi, Bhulawan Pandit, Parsottam Gadaria, Mahavira and Jaivira etc. were eliminated. Dacoit Phoolan Devi ran for her life and took shelter in Madhya Pradesh. Another milestone was the promulgation of the anti-dacoity ordinance.
As Social Welfare Minister, she sanctioned pension to about two lakh widows and one lakh disabled persons. Several thousand houses and shops were built in the rural areas and gifted to the poor scheduled caste families. Loans were given to the depressed classes to help them earn their livelihood. FRM.http://www.swaroopkumaribakshi.com/