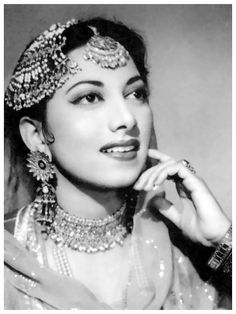 Swapnil Sansar Suraiya Jamaal Sheikh  was a singer and actress of the Indian films in the 40s and 50s, and was popularly known by her first name Suraiya.Suraiya was born in Gujranwala, Punjab, (which is in Pakistan), and was the only child of her parents. She was not formally trained in music; yet she went on to become a successful singing actress.She attended New Girls’ also known as J.B. Petit High School for Girls, in Fort, Bombay (Mumbai). She received religious Islamic teachings in Persian at home.Suraiya made her debut as a child artist in Usne Kya Socha (1937). She got a prominent role as a child artist with the help of her uncle Zahoor, who was then a popular villain actor. During a holiday from school in 1941, she accompanied him to Mohan Studios to see the shooting of the film Taj Mahal which was being directed by Nanubhai Vakil. Vakil noticed Suraiya and not having in his mind at that time any particular young girl to play the role of young Mumtaz Mahal in Taj mahal, selected Suraiya to play that role.Music director Naushad once heard Suraiya’s voice on All India Radio while she sang for a children’s program, and chose her to sing as a 13 year old for Mehtaab in Kardar’s film Sharda (1942). He was Suraiya’s mentor and she sang some of the best songs of her career under his baton. Later he gave hits after hits when Suraiya became full fledged singing star in Anmol Ghadi (1946), Dard (1947), Dillagi (1949) and Dastaan (1950). Naushad composed approximately 51 songs for Suraiya, coming at 2nd place after Husnlal Bhagatram for composing the highest number of songs for Suraiya.As an adult, Suraiya initially played secondary roles in K. Asif’s Phool (1944), Mehboob Khan’s Anmol Ghadi (1946), which was written by Aghajani Kashmeri also Kashmiri, and Dard (1947). She got a break as a heroine for the film Tadbir (1945) at the recommendation of K. L. Saigal, who liked her voice during a rehearsal. She went on to costar with Saigal in Omar Khayyam (1946) and Parwana (1947). Although by then she had a couple of hit songs, but the four solo songs which she sang in Parwana made her a genuine singer star. She considered Composer of these songs, Khawaja Khurshid Anwar as her favorite Music Director for whom she sang just thirteen songs during 1943 to 1949. More opportunities arose for Suraiya after reigning actresses Noor Jehan and Khursheed Bano migrated to Pakistan following the 1947 partition of British India.As an actress, Suraiya had an edge over her contemporaries Kamini Kaushal and Nargis because she could sing her own songs. After three hits Pyar ki jeet (1948), Badi Behen, and Dillagi (1949), she became the highest paid female star. But her reign at the top was brief; her films started flopping in the 1950s. She made a comeback in Waaris and Mirza Ghalib (1954). Rustom Sohrab (1963) was her last film.Suraiya was romantically involved with actor Dev Anand. The two of them costarred in six films between 1948 and 1951. During the shooting of the song Kinare kinare chale jayen ge of the film Vidya in 1948, a boat capsized and Dev Anand saved Suraiya from drowning. After this incident Suraiya fell in love with him. Dev Anand also responded.On the sets of the film Jeet 1949, Dev Anand finally proposed to Suraiya and gave her a diamond ring worth Rs 3,000 but her maternal grandmother opposed the relationship as they were Muslim and Dev Anand was a Hindu. Out of this grief Suraiya decided to remain a spinster all her life. They stopped acting together, after her grandmother opposed, so Do Sitare 1951, turned out to be the last film of the pair to release.Suraiya lived in her apartment on Marine Drive in Mumbai until her death due to cancer in 2004 at age 74.She was interred at Badakabarastan in Marine Lines, Mumbai.Suraiya was declared the first Melody Queen (Malika-e-Tarannum) in the sub-continent and much later Noor Jehan was awarded with the same title.Her greatness can be judged by these comments. “You have put life in the soul of ‘Mirza Ghalib’”, were the remarks of Pandit Jawaharlal Nehru, the first Indian Prime Minister. The Hollywood legend Gregory Peck was keen to meet Suraiya. In connection with the shooting of some film he happened to visit Bombay (Mumbai) where he was honoured by the great actress by meeting him.