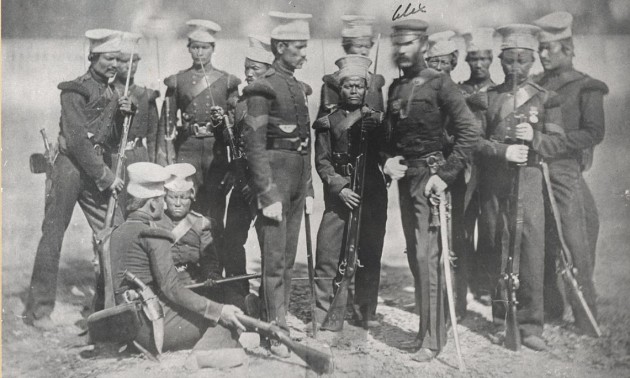 Hitler once said “If someone says that he is not afraid of dying he is either a Gorkha or he is lying. The phrase itself  is an identity of the Gurkhas. The Gorkhas are the  ones who are known for their loyality and their bravery. From the history of the second world war to many wars and battles fought till date, Gorkhas are the ones who have contributed  for the Nation in every single battle without caring for their life. The greatest is that the world knows who Gorkhas are. But the Indian Gorkhas are considered as the third class citizen, a gatekeeper, a terrorist and sometimes labelled by the tags of Foreigner . The Gorkhas who sacrifice their life on the borders to protect the country, are with ease tagged as terrorist.   Where the whole world respects Gorkhas and praises them for their bravery and sincerity, in India they think Gorkhas are foreigner. Indian Gorkhas are citizens of India as per the Gazette notification of the Government of India on the issue of citizenship of the  Gorkhas of India. However, the Indian Gorkhas are faced with a unique identity crisis with regard to their Indian citizenship because of the Indo Nepal Treaty of Peace and Friendship (1950)that permits on a reciprocal basis, the nationals of one country in the territories of the other the same  privileges in the matter of residence, ownership of property, participation in trade and commerce, movement and other privileges of a similar nature. “The Indian Gorkhas are a mixture of castes and tribal ethenic clans. The caste groups include the Khas-Parbatiyas including Bahun (Brahmins, Chettri,Kami, Damai, Sarki, etc. There is a considerable presence of Newar community who mostly identify themselves through the singular caste-surname title of Pradhan. Newars Bahuns and Chettris fall under General Category in indias affirmative action, whereas Kami, Damai, Sarki, (khas lower castes) and Dhobi and Kasai (Newar lower castes) are SC. Gurung, Magar, Tamang, Thumi, Bhujel, (khawas), Rai(khambu), limbu(subba), sunuwar(Mukhiya) yakha(dewan), Sherpa, yolmo ethic groups also inhabit here. Although each of them have their own language (belonging to the Tibeto-Burman or Indo -Aryan languages), the lingua Franca among the Gorkhas is the Nepali Language with its script in Devnagari. The Nepali language which is the common binding thread of all Gorkhas  Castes and clans. The least known fact and the things that are overshadowed are Late Ram Singh Thakuri who composed the music of our National Anthem belongs to the Gorkha community. Not just that Late Ari Bahadur Gurung is one of the signatory of the Indian Constitution. Late Subash Bose used to have maximum colleagues during our struggle for Independence   Many people have a misconception about the Gorkhas in India that they are foreigners and have migrated from Nepal. There could be definetley be no greater blunder mistake than this.The Gorkhas are the aborigines of India and if needed we can trace our history back to the ancient times. Gorkhas  have done the country proud as bureaucracy, literatures, sportsmen, film directors, politicians, and social workers. We can’t discount the vital role Gorkhas play in protecting the country’s territory as the most valourous of Indian Armed Forces Personnel. It is estimated that there are 10 million Gorkhas in India who are the actual citizen of the country. We Gorkhas are considered to be the worlds finest armed units  The Gorkha cops are definitely the most elite fighting force in the British Army and they have consistently proved their worth in every battle they have fought till now, whether it was a victory or a defeat. The  Gorkhas have indomitable fighting spirit that clearly distinguishes them from his peers. Gorkha is not a common soldier, but a warrior, and definitely not a man to be taken lightly. Our moto is Better to die than be a coward. In the First World War, Gorkhas won almost 20,000 awards for gallantry. Bravest of the brave, most generous of the generous are the Gorkhas. Today when we Gorkhas are fighting for our identity the Government has failed to understand us and has forgot our contribution for the Nation in every aspects.We are the warriors. The Gorkhas are being neglected.