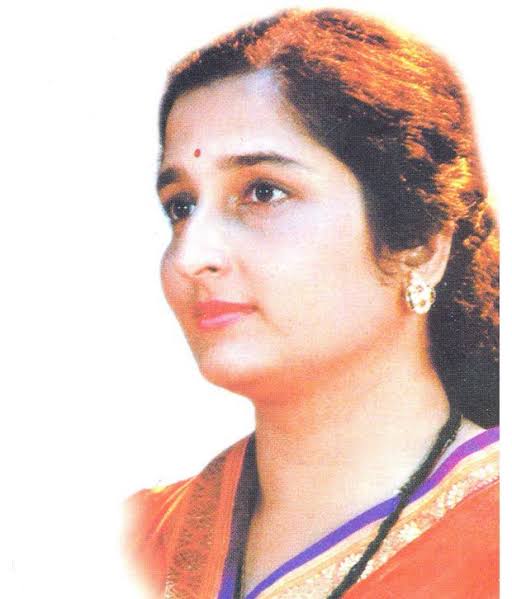 Anuradha Paudwal (27-10-1952) is a popular playback singer in Bollywood.She has sung songs in Hindi, Marathi, Tamil, Oriya, and Nepali.She studied at Xavier’s College in Mumbai. She was married to the late Arun Paudwal, who worked with music director S. D. Burman as his assistant. Her singing career started in 1973 with the movie, Abhimaan, (starring Amitabh Bachchan and Jaya Bachchan) in which she sang a Shloka. In the same year she also made her Marathi film debut with “Yashoda” (music by Datta Davjekar). In 1974, she brought out a record of Non-film Marathi songs or “bhav geeten” which became very popular.
In 1976, she got her break as a playback singer in Hindi films with Kalicharan (starring Shatrughan Sinha and Reena Roy). Her first solo was in the movie, Aap Beati, (starring Hema Malini and Shashi Kapoor). Laxmikant-Pyarelal were the music-composer duo for that movie. She also occasionally sang songs for composers Rajesh Roshan (Des Pardes), Jaidev (Dooriyan, Laila Majnu), Kalyanji Anandji (Kalaakar, Vidhaata), and Usha Khanna (Souten, Sajan Bina Suhagan).
Anuradha apparently never received any formal training in classical music, stating in an interview, “I have not received any formal training in classical music. I have tried many times, but it has never worked out. I learnt a little here and a little there, but ultimately, I just practiced for many hours listening to Lataji”.
Anuradha gained recognition with her popular numbers for the movie, Hero, for composers Laxmikant-Pyarelal. Her collaboration with Laxmikant-Pyarelal produced more success with songs for Meri Jung (“O Mere Kwabon Ke”), Batwara (“Thaare Vaaste Re Dola-Tu Maaro Kaun Lage”), Nagina and many more.Ram Lakhan saw Laxmikant-Pyarelal giving three major hit songs to Anuradha. Their association ended with Tezaab where she sang two good numbers for them – “Kehdo Ki Tum” and “Hum Tumko Dilbar Kyon Maane”.
Following this she collaborated with movie producer, Gulshan Kumar, and began a success streak with the movies, Lal Dupatta Malmal Ka, Tezaab, Aashiqui and Dil Hai Ke Manta Nahin. She along with Gulshan Kumar were instrumental in getting many unknown playback singers to the fore, including Kumar Sanu, Udit Narayan, Abhijeet, Sonu Nigam. New Music directors, including her husband Arun Paudwal, were introduced to the music world. Nadeem-Shravan, Anu Malik, Anand-Milind, Nikhil Vinay and Amar Utpal all collaborated with T-Series (Gulshan Kumar’s music label) and started a new era of melody in Bollywood. Most of her duets have been with Udit Narayan, Kumar Sanu, Mohammed Aziz. She sang some songs with Kishore Kumar, Mohammed Rafi and also with her female co-singers; Lata Mangeshkar, Asha Bhosle, Alka Yagnik, Kavita Krishnamurthy and Sadhana Sargam. Her other notable songs were also for the famous duo Shiv-Hari, for the movie “Sahebaan”. She has also sung for R.D. Burman in her initial days and actually convinced him to make songs for Gulshan Kumar’s label in his last days and the song “Aja Meri Jaan” set to one of the background score of R.D.Burman from Saagar is still popular. She also sang beautiful duets with her co-singers from Tamil Nadu and Kerala, notably S. P. Balasubrahmanyam and K. J. Yesudas.Anuradha has had her share of controversies as well. She was one of the rare singers to bloom during the reign of the Mangeshkar sisters in the Bollywood music industry. She was also under much controversy when she dubbed the songs of Alka Yagnik in the film “Dil”. This also caused rifts between Anand-Milind and Alka Yagnik, thereby causing them to not collaborate for 2 years. Later in 1998, Anuradha Paudwal dubbed the songs of Alka Yagnik once again for the film Itihaas, this time under the music direction of Dilip Sen-Sameer Sen. However, Alka Yagnik, protested, to which the music company, T-Series was forced to include both versions of the same song, one in the voice of Alka Yagnik and the other in the voice of Anuradha Paudwal. She further went to dub Lata Mangeshkar’s song in “Radha Ka Sangam” citing that her voice suited the heroine better. Anu Malik, a smaller name then, who had composed the soundtrack, protested against this move.
At her peak, Anuradha announced that henceforth she would sing exclusively for “T-Series”, and concentrated on devotional songs and “cover-version” albums. T-Series used her attractive and pleasing looks to good effect in numerous Bhajan and promotional videos. She was the first playback singer whose face featured on music covers more than the film’s actors. She sang for T-series for some time and then went into a sabbatical. After about five years, she restarted her playback career. She sang a few hit songs for her old music directors but the reception for her comeback was mild.
Although Anuradha has significantly cutback in singing for films, she has continued on with her popularity for singing devotional songs and creating devotional albums, which ultimately remains her forte. She has collaborated with Pandit Jasraj on his “Geet Govind , many devotional albums with Anup Jalota. Her voice is well suited on devotional numbers.Anuradha sang in a number of Marathi movies including the memorable “Disate Majalaa”, “Raja Lalakaari”, and “Kaalyaa Maatita Maatitaa”. Most of these movies had music by the duo of Anil-Arun, Arun being her husband, who collaborated with Anil Mohile to form a pair.
1986: Filmfare Award for Best Female Playback Singer for “Mere Mann Bajaa Mridang” from Utsav.
1990: National Film Award for Best Female Playback Singer for “He Ek Reshami” from Kalat Nakalat
1991: Filmfare Award for Best Female Playback Singer for “Nazar Ke Saamne” from Aashiqui.
1992: Filmfare Award for Best Female Playback Singer for “Dil Hai Ke Manta Nahi” from Dil Hai Ke Manta Nahin.
1993: Filmfare Award for Best Female Playback Singer form “Dhak Dhak Karne Laga” from Beta.
2011: Mother Teresa Award for Lifetime Achievement.