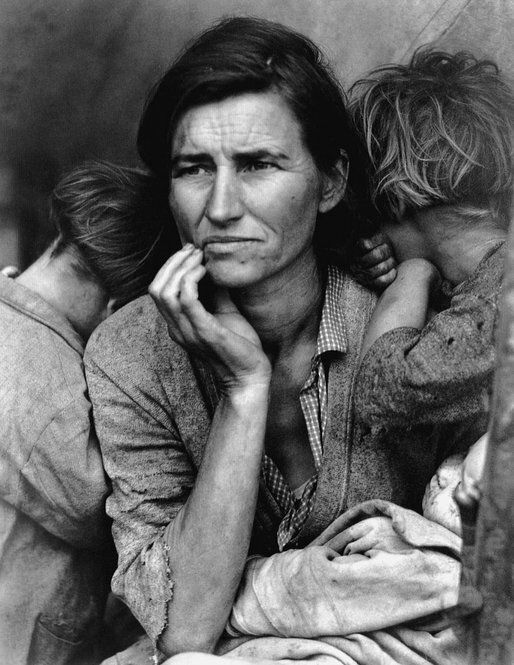 Posted By: Sansar Swapnilon: October 11, 2021In: On This DayNo Comments
Print Email

In early March, 1936, Dorothea Lange drove past a sign reading, “PEA-PICKERS CAMP,” in Nipomo, California. At the time, she was working as a photographer for the Resettlement Administration (RA), a Depression-era government agency formed to raise public awareness of and provide aid to struggling farmers. Twenty miles down the road, Lange reconsidered and turned back to the camp, where she encountered a mother and her children. “I saw and approached the hungry and desperate mother, as if drawn by a magnet,” she later recalled. “She said that they had been living on frozen vegetables from the surrounding field and birds that the children killed.” 1 Lange took seven exposures of the woman, 32-year-old Florence Owens Thompson, with various combinations of her seven children. One of these exposures, with its tight focus on Thompson’s face, transformed her into a Madonna-like figure and became an icon of the Great Depression and one of the most famous photographs in history. This image was first exhibited at The Museum of Modern Art in 1940, under the title Pea Picker Family, California; by 1966, when the Museum held a retrospective of Lange’s work, it had acquired its current title, Migrant Mother, Nipomo, California.

Lange had little interest in classifying her photographs as art: she made them to effect social change. Although she had led a successful career as a portrait photographer in San Francisco throughout the 1920s, by 1933, at the height of the Great Depression, she began to photograph life outside her studio. On one early excursion, Graflex camera in tow, she visited a nearby breadline, which a woman known as the “White Angel” had set up to feed the legions of unemployed. This resulted in White Angel Bread Line, San Francisco, a photograph of a man turned away from the hungry crowd, his interlaced hands and set jaw often taken as representative of a collective despair. Lange became increasingly confident in her ability to use photography to confront the urgent circumstances around her, and others—including her future husband, the agricultural economist Paul Taylor—soon recognized her talent.

In early 1935, on Taylor’s recommendation, Lange began to work for the California State Emergency Relief Administration. That summer, the agency was transferred to the RA, which had recently begun a photodocumentary project to draw attention to the plight of the rural poor. (In 1937, the RA would become the Farm Security Administration, or FSA.) Lange worked for the FSA periodically between 1935 and 1939, primarily traveling around California, the Southwest, and the South to document the hardships of migrant farmers who had been driven west by the twin devastations of the Great Depression and the Dust Bowl. On March 10, 1936, two of Lange’s photographs of the Nipomo pea pickers’ camp were published in The San Francisco News under the headline “Ragged, Hungry, Broke, Harvest Workers Live in Squallor [sic].” The photograph that became known as Migrant Mother was published in the paper the following day, on March 11, accompanying the editorial “What Does the ‘New Deal’ Mean To This Mother and Her Children?” The same day, the Los Angeles Times reported that the State Relief Administration would deliver food rations to 2,000 itinerant fruit pickers in Nipomo the next day.

Lange’s commitment to social justice and her faith in the power of photography remained constant throughout her life. In 1942, with the United States recently entered into World War II, the government’s War Relocation Authority assigned her to document the wartime internment of Japanese Americans, a policy she strongly opposed. She made critical images, which the government suppressed for the duration of the war. Later, Lange accompanied Taylor to Asia, where she continued to take photographs, including ones of the legs, feet, and hands of dancers in Indonesia; she also traveled to Ireland for LIFE magazine.

In an essay written with her son in 1952, Lange critiqued contemporary photography as being “in a state of flight,” seduced by the “spectacular,” “frenzied,” and “unique” at the expense of the “familiar” and “intimate.” It had become, she wrote, “more concerned with illusion than reality. It does not reflect but contrives. It lives in a world of its own.” 2 Against this trend, she urged photographers to reconnect with the world—a call reflective of her own ethos and working method, which coupled an attention to aesthetics with a central concern for the documentary. “That the familiar world is often unsatisfactory cannot be denied, but it is not, for all that, one that we need abandon,” she argued. “We need not be seduced into evasion of it any more than we need be appalled by it into silence.… Bad as it is, the world is potentially full of good photographs. But to be good, photographs have to be full of the world.” Agency.