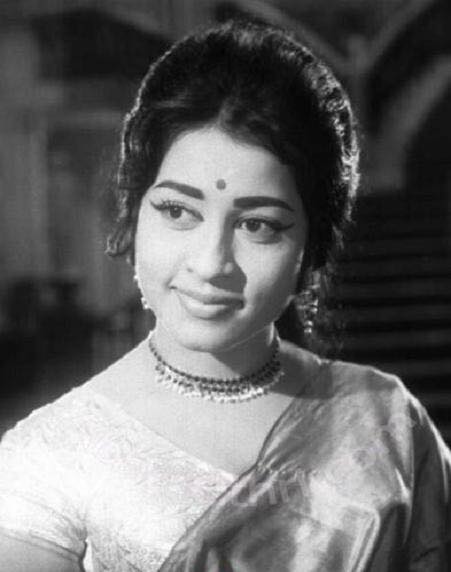 Posted By: Sansar Swapnilon: October 31, 2021In: Filmi SansarNo Comments
Print Email
Geetanjali  was a  actress who acted in Telugu,Tamil, Malayalam films for several years. She also acted in few Hindi films. She was famous for her roles in Illalu, Sitarama Kalyanam with NTR, Adurti Subba Rao’s Dr. Chakravarthy, Murali Krishna, Abbayigaru Ammayigaru, Kaalam Marindi and Sambarala Rambabu. She was also a member of the Nandi Award committee.
Originally named as Mani, Geetanjali was born in the year 1947 in Kakinada, Madras Presidency, undivided India now in Andhra Pradesh. Geetanjali was daughter of Sri Rama Murthy  & Shyamalamba . She was married to Ramakrishna and having a son Adith Srinivas, who introduced as a hero in a film called “Bhuma” (2008). After marriage, Geethanjali took a long break from films & returned as a character artist. Her last movie in Telugu Tamannaah Bhatia’s “Mahalakshmi”. Geetanjali worked in the Hindi film Parasmani, a Lakshmikant Pyarelal production. Since her name Mani was already present in the title, the film-maker re-christened her as Geetanjali.
The actress worked with actor Rama Krishna in a few films before marrying him. Rama Krishna is also an actor who has acted in many Telugu, Tamil & Malayalam movies.
Geetanjali died in the early hours of 31 October 2019 from cardiac arrest. She died while undergoing treatment at a private hospital near Film City in Hyderabad.