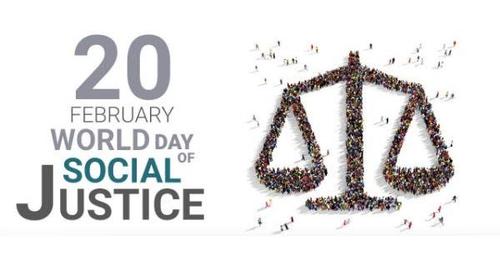 Posted By: Swapnil Sansaron: February 20, 2022In: On This DayNo Comments
Print Email

The United Nations’ (UN) World Day of Social Justice is annually observed on February 20 to encourage people to look at how social justice affects poverty eradication. It also focuses on the goal of achieving full employment and support for social integration.

Many organizations, including the UN and the International Labour Office, make statements on the importance of social justice for people. Many organizations also present plans for greater social justice by tackling poverty, social and economic exclusion and unemployment. Trade unions and campaign groups are invited to call on their members and supporters to mark the day. The Russian General Confederation of Trade Unions declared that the common slogan would be “Social Justice and Decent Life for All!”.

Schools, colleges and universities may prepare special activities for the day or plan a week of events around a theme related to poverty, social and economic exclusion or unemployment. Different media, including radio and television stations, newspapers and Internet sites, may give attention to the issues around the World Day of Social Justice.

It is hoped that particular coverage is given to the links between the illicit trade in diamonds and armed conflicts, particularly in Africa, and the importance of the International Criminal Court. This is an independent court that conducts trials of people accused of genocide, crimes against humanity and war crimes.

The World Day of Social Justice is a global observance and not a public holiday.

The World Summit for Social Development was held in Copenhagen, Denmark, in 1995 and resulted in the Copenhagen Declaration and Programme of Action. At this summit, more than 100 political leaders pledged to make the conquest of poverty and full employment, as well as stable, safe and just societies, their overriding objectives. They also agreed on the need to put people at the center of development plans.

Nearly 10 years later, the UN’s member states reviewed the Copenhagen Declaration and Programme of Action when they gathered at a session of the Commission for Social Development in New York in February 2005. They also agreed to commit to advance social development. On November 26, 2007, the UN General Assembly named February 20 as the annual World Day of Social Justice. The day was scheduled to be first observed in 2009.Agency