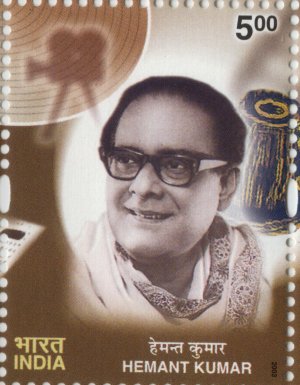 Agency.Hemanta Kumar Mukhopadhyay  was a Bengali singer,composer and producer. He sang in Hindi films under the name Hemant Kumar.Hemanta was born in the city of Varanasi on 16 June 1920. His family originated from Baharu village in West Bengal. They migrated to Kolkata in the early 1900s. Hemanta grew up there and attended Mitra Institution school of Bhawanipore area. There he met his longtime friend, Subhas Mukhopadhyay who later became a Bengali poet. During this time, he developed friendship with noted writer Santosh Kumar Ghosh. In fact, at that time, Hemanta used to write short stories, Santosh Kumar wrote poems and Subhash Mukhopadhyay sang songs. After passing the intermediate examinations (12th grade), Hemanta joined Bengal Engineering college to pursue Engineering. However, he quit academics to pursue a career in music, despite parental objection. He briefly tried his hand at literature and also published a short story in a prestigious Bengali magazine called Desh, but by the late-1930s he was committed entirely to music.Under the influence of his friend Subhas Mukhopadhyay, Hemanta recorded his first song for All India Radio in 1933. The first line of the song was Amar Ganete Ele Nabarupi Chirantanii. Hemanta’s music career was primarily mentored by the Bengali musician, Sailesh Duttagupta. In an interview on television in the early 1980s, Hemanta had mentioned that he had also received classical music training from Ustad Faiyaz Khan, but his tutelage was cut short by Ustad’s untimely death.In 1937, Hemanta cut his first gramophone disc under the Columbia label. The songs (non-film) on this disc were Janite Jadi Go Tumi and Balo Go Balo More whose lyrics were by Naresh Bhattacharya and music was composed by Sailesh Duttagupta. Thereafter, every year Hemanta continued to record non-film discs for the Gramophone Company of India (GCI) till 1984. His first Hindi songs were Kitana Dukh Bhulaya Tumne and O Preet Nibhanewali, released in 1940 under GCI’s Columbia label. Music for these songs were composed by Kamal Dasgupta, lyrics were by Faiyaz Hashmi.Hemanta’s first film song was in the Bengali film Nimai Sanyas released in 1941. Music for this film was scored by Hariprasanna Das. Hemanta’s first compositions for himself were the Bengali non-film songs Katha Kayonako Shudhu Shono and Amar Biraha Akashe Priya in 1944. Lyrics of these two songs were by Amiya Bagchi.