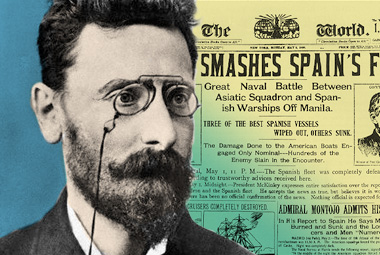 Joseph J.Pulitzer was a newspaper publisher of the St. Louis Post-Dispatch and the New York World. He became a leading national figure in the Democratic Party and was elected congressman from New York. He crusaded against big business and corruption, and helped keep the Statue of Liberty in New York.

Legacy and honors
The U.S. Post Office issued a 3-cent stamp commemorating Joseph Pulitzer on the 1947 100th anniversary of his birth.
The Pulitzer Art Museum in Saint Louis was founded by his family’s philanthropy and is named in their honor.In 1989 Joseph Pulitzer was inducted into the St. Louis Walk of Fame.He is featured as a character in the Disney film Newsies (1992), in which he was played by Robert Duvall, and the Broadway stage production (Newsies) adapted from it which was produced in 2011.In the 2014 historical novel, The New Colossus, by Marshall Goldberg, published by Diversion Books, Joseph Pulitzer gives reporter Nellie Bly the assignment of investigating the death of poet Emma Lazarus.The Hotel Pulitzer in Amsterdam was named after his grandson Herbert Pulitze.Agency.(Photo collage by Tablet Magazine. Pulitzer photo: WikiCommons)