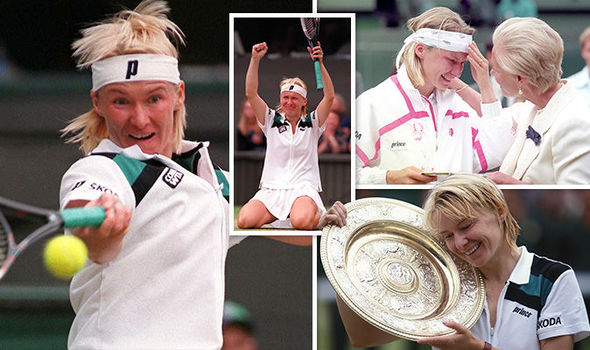 Jana Novotná (2 October 1968 0was a Czech professional tennis player. She played a serve and volley game, an increasingly rare style of play among women during her career. Novotná won the women’s singles title at Wimbledon in 1998, and was runner-up in three other majors. Novotná also won 12 major women’s doubles titles (completing a double career Grand Slam), four major mixed doubles titles, and three Olympic medals. She reached a career-high singles ranking of world No. 2 in 1997, and held the No. 1 ranking in doubles for 67 weeks.Jana Novotná turned professional in February 1987.In the early years of her career, she was known primarily for her success as a doubles player. In the early 1990s, Novotná began to have success in singles once four-time Grand Slam singles champion Hana Mandlíková became her coach. Mandlíková would coach her for nine years. Previously she had been coached by Mike Estep.

Novotná retired from the professional tour in 1999. During her 14-year career, she won 104 titles (24 in singles, 76 in women’s doubles and 4 in mixed doubles). She was inducted into the International Tennis Hall of Fame in 2005.From 2000 to 2002, Novotná was a commentator for Wimbledon for the BBC. From 2006 onward, Novotná played the Ladies’ Invitation Doubles tournament at Wimbledon; winning it in 2006, 2007, 2008, 2010 and 2014.In 2010, her partner was Martina Navratilova. Also in 2010, she helped Navratilova through her treatment for breast cancer.She played invitational doubles in the other Grand Slams as well and also did charity events and exhibitions. She continued to coach players, including Grand Slam champion Barbora Krejčíková.

Novotná lived in Florida until 2010, when she returned to her native Czech Republic. She bought a large house and property in the village of Omice, near her hometown of Brno, where she lived with her partner, former Polish tennis player Iwona Kuczyńska. She died of cancer at the age of 49 surrounded by family and friends on 19 November 2017. She chose to keep her diagnosis of cancer private, only telling her closest friends and relatives.Agency