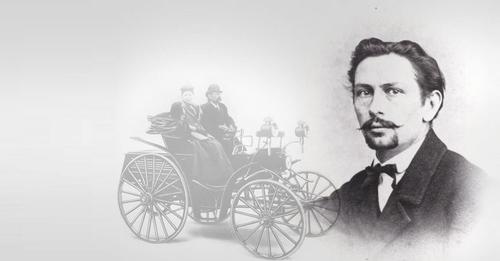 Karl Friedrich Benz, was a German engine designer and automotive engineer. His Benz Patent Motorcar from 1885 is considered the first practical modern automobile and first car put into series production. He received a patent for the motorcar in 1886.

His company Benz & Cie., based in Mannheim, was the world’s first automobile plant and largest of its day. In 1926 it merged with Daimler Motoren Gesellschaft to form Daimler-Benz which produces the Mercedes-Benz among other brands.

Karl Friedrich Michael Vaillant, was born on 25 November 1844 in Mühlburg, now a borough of Karlsruhe, Baden-Württemberg, which is part of modern Germany. His parents were Josephine Vaillant and a locomotive driver, Johann Georg Benz, whom she married a few months later. According to German law, the child acquired the name “Benz” by legal marriage of his parents. When he was two years old, his father died of pneumonia, and his name was changed to Karl Friedrich Benz in remembrance of his father.Despite living in near poverty, his mother strove to give him a good education. Benz attended the local school in Karlsruhe and was a prodigious student. In 1853, at the age of nine, he started at the scientifically oriented Lyceum. Next he studied at Karlsruhe’s polytechnical school under the instruction of Ferdinand Redtenbacher.

Benz had originally focused his studies on locksmithing, but he eventually followed his father’s steps toward locomotive engineering. On 30 September 1860, at age 15, he passed the entrance exam for mechanical engineering for the Karlsruhe polytechnical school, which he subsequently attended. Benz graduated 9 July 1864 aged 19.

Following his formal education, Benz had seven years of professional training in several companies, but did not fit well in any of them. The training started in Karlsruhe with two years of varied jobs in a mechanical engineering company.

He then moved to Mannheim to work as a draftsman and designer in a scales factory. In 1868 he went to Pforzheim to work for the bridge building company Gebrüder Benckiser Eisenwerke und Maschinenfabrik. Finally, he went to Vienna for a short period to work at an iron construction company.

On 4 April 1929, Karl Benz died at his home in Ladenburg at the age of 84 from a bronchial inflammation. Until her death on 5 May 1944, Bertha Benz continued to reside in their last home. Members of the family resided in the home for thirty more years. The Benz home now has been designated as historic and is used as a scientific meeting facility for a nonprofit foundation, the Gottlieb Daimler and Karl Benz Foundation, that honors both Bertha and Karl Benz for their roles in the history of automobiles.Agency