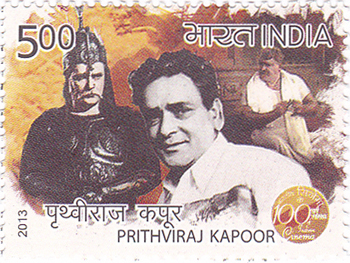 A pioneer of theatre and Hindi film industry

Prithviraj Kapoor was a pioneer of theatre and of the Hindi film industry, who started his career as an actor, in the silent era of Hindi cinema, associated with IPTA and who founded Prithvi Theatres, a travelling theatre company based in Mumbai, in 1942.He was also the patriarch of the Kapoor family of Hindi films, four generations of which family, beginning with him, have played active roles in Hindi film industry. The Government of India honoured him with the Padma Bhushan in 1969 and the Dadasaheb Phalke Award in 1971 for his contributions towards cinema.
Prithviraj was born on November 3, 1901 at Samundri near the town of Lyallpur Punjab (currently Faisalabad, Pakistan), then under British colonial rule. His ancestors were Zamindars of Samundri.Prithviraj could speak English, Hindi, Urdu, Punjabi, Bengali, Gujarati and Hindko.
His father, Dewan Basheswarnath Kapoor, was a sub-inspector of police. Prithviraj received his initial education at Khalsa College Lyallpur and at Lahore. His paternal grandfather, Dewan Keshavmal, was a powerful influence during his childhood. Baseshwarnath was posted at Peshawar, and so Prithviraj received his higher education at the Edwardes College, Peshawar, Pakistan and joined a two year program in Law to become a Lawyer. It was here that his talents on stage first received expression. Prithviraj’s son Shammi recollected that Prof. Jai Dayal, a member of the faculty, was instrumental in nurturing his talent. The professor was in love with an English lady by the name of Nora Richard, who in turn was a theatre aficionado with a passion for Shakespeare and Ibsen. The couple found Prithviraj the perfect material for many roles in the plays they mounted. This was his grounding in the art of the theatre. He became a Lawyer, and started practising Law privately.
Prithviraj did his B.A. at Edwardes College, Peshawar, a feat that few of his descendants were destined to match. He also studied law as a graduate student for two years, but his heart was in the theatre. In 1928, with the help of a loan from his aunt, Prithviraj moved to the city of Bombay (present-day Mumbai) which is the hub of the Hindi film industry, although he completed his Law, and obtained a degree, and practised Law.
He acted as an extra in his first film role, though he grew up to get a lead role for his third Cinema Girl in 1929. After featuring in nine silent films,Kapoor did a supporting role in India’s first film talkie, Alam Ara (1931). His performance in Vidyapati (1937) was much appreciated. His best-known performance is perhaps as Alexander the Great in Sohrab Modi’s Sikandar (1941). He also joined the only English theatrical company called “J. Grant Anderson” which remained in India for a year. Through all these years Prithviraj remained devoted to the theatre and performed on stage regularly. He developed a reputation as a fine actor on both stage and screen.Prithviraj Died on 29 May1972 in Bombay.Agency.