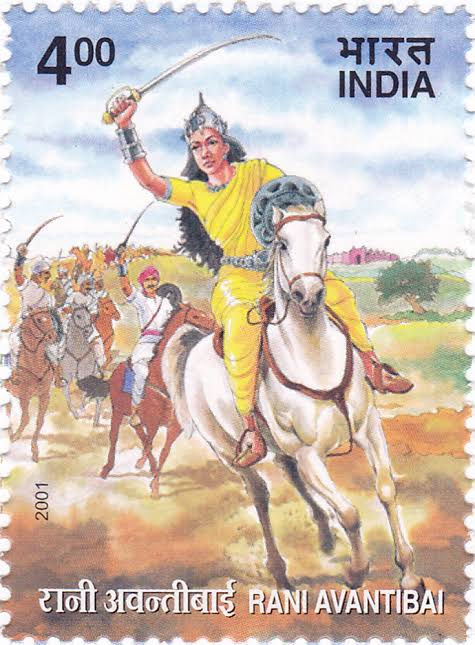 Avantibai (or Avanti Bai) is a freedom fighter and queen of what is now Dindori in Madhya Pradesh, which in her time was called Ramgarh. An opponent of the British East India Company during the Indian Rebellion of 1857, information concerning her is sparse and mostly comes from folklore. She is claimed as a member of the Lodhi caste and has been used as an icon in politics in the 21st century.

Said in folklore to be a member of the Lodhi caste, Avantibai was the queen of Vikramaditya Singh of Ramgarh estate, which now lies in Dindori district, Madhya Pradesh. Upon the death of her husband in 1851, Avantibai attempted to act as regent for her son, Amar Singh, who was a minor. The British authorities did not accept this and the Court of Wards appointed an administrator to oversee his affairs. She threw the administrator out and declared war against the British.

When the revolt of 1857 broke out, Avantibai raised and led an army of 4000. Her first battle with the British took place in the village of Kheri near Mandla, where she and her army were able to defeat the British forces. However, stung by the defeat the British came back with vengeance and launched an attack on Ramgarh. Avantibai moved to the hills of Devharigarh for safety. The British army set fire to Ramgarh, and turned to Devhargarh to attack the queen.

Avantibai resorted to guerilla warfare to fend of the British army. She committed suicide with her sword on 20 March 1858 when facing almost certain defeat in battle.

After independence, Avantibai has been remembered through performances and folklore. A folk song of the Gondi people, an adivasi tribe of the region, says:The Rani who is our mother, strikes repeatedly at the British. / She is the chief of the jungles. / She sent letters and bangles to other (rulers, chieftains) and aligned them to the cause. / She vanquished and pushed the Britishers out, / in every street she made them panic, / so that they ran away wherever they could find their way. / Whenever she entered the battleground on horseback,/she fought bravely and swords and spears ruled the day. / O, she was our Rani mother

Although little is known of Avantibai except through folklore, her story merited a brief inclusion in the National Council of Educational Research and Training  history textbooks from 2012 as a participant in the 1857 rebellion, after parliamentary protests from the Bharatiya Janata Party and Bahujan Samaj Party. The BSP, in particular, had been using the story of Avantibai, along with accounts of other folk heroines, as a means to promote the image of Mayawati, with her biographer, Ajoy Bose, noting that she is cast as their “modern avatar”.The Narmada Valley Development Authority named a part of the Bargi Dam project in Jabalpur in her honour.First Stamp Of ‘Rani Avantibai’
India Post has issued two stamps in honour of Avantibai, on 20 March 1988 and on 19 September 2001.Agency.