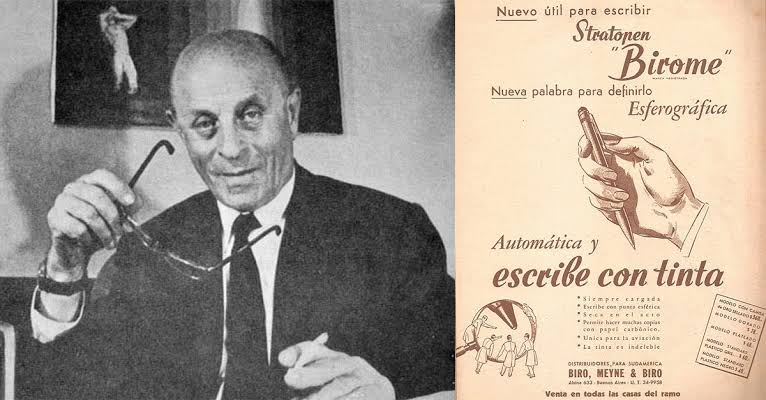 László Bíró was born September 29, 1899, Budapest.Bíró was editor of a journal in Budapest titled Hongrie-Magyarország-Hungary, and he also was interested in painting and sculpture. As a journalist he got frequently annoyed with the problems of using a fountain pen and began to think about how he could solve them with a more convenient writing device. He had noticed that the type of ink used in newspaper printing dried quickly, leaving the paper dry and smudge-free.

He also realised that the method used in printing by which a rotary cylinder provides continuous and even film of the ink could be adapted for use in a pen in such a way that a slender tube containing the ink with a small ball bearing at the end would be able to deliver the ink continuously to the paper. He tried using the same ink in a fountain pen but found that it would not flow into the nib, as it was too viscous and Biro had to devise a new type of point. He did so by fitting his pen with a tiny ball bearing in its tip. As the pen moved along the paper, the ball rotated picking up ink from the ink cartridge and leaving it on the paper.

Bíró’s first ballpoint contained a large ball, and the pen was used for marking crates of goods. Later, he reduced the size of the ball, so the pen could be applied for writing. Bíró first presented his pens at the Budapest International Fair in 1931.

Experiments have proceeded on abroad because in 1939 concerning for his own and his family’s safety they emigrated from Hungary, firstly to Paris and then to Argentina.Working with ink used to find cracks in cast iron, his first really successful ballpoint pen was patented in Argentina on June 10, 1943, and he established Biro Pens of Argentina (in Argentina the ball pen is known as birome).

The first ballpoint pens sold in large quantities were manufactured in 1945 and were first marketed in Argentina under the name of “Eterpen”, and then, in France as BIC (Biro Crayon). The British Government bought the licensing rights to this new design for the war effort. The British Royal Air Force aircrew needed a pen, one that would not leak at higher altitudes in fighter planes as the fountain pen did. Their successful performance for the Air Force brought to the Biro pens world-wide reputation. In English-speaking regions some people still call the ballpoint a biro.

In 1940ies ballpoint pens appeared on the market of the USA. They were sold as the first pens which wrote underwater. Ballpoints were a tremendous success. In one of the large store departments in New York more than 10,000 ballpoint pens were sold during a lunch on October, 29 1945.

In 1953 the first inexpensive ball pens appeared, when French baron Bich of BIC Co, engaged in manufacturing of ballpoint pens, managed to improve the technological process and lowered considerably manufacturing expenses. Bic pens were very cheap and soon became extremely popular.He had an other significant inventions such as automatic gear shift. In 1932, he drove from Budapest to Berlin (more than 1000 km) on a motorcycle with his officially sealed gear shift.László Bíró died in Buenos Aires in 24 th Oct.1985. Argentina’s Inventor’s Day is celebrated on Biro’s birthday, September 29.Agency