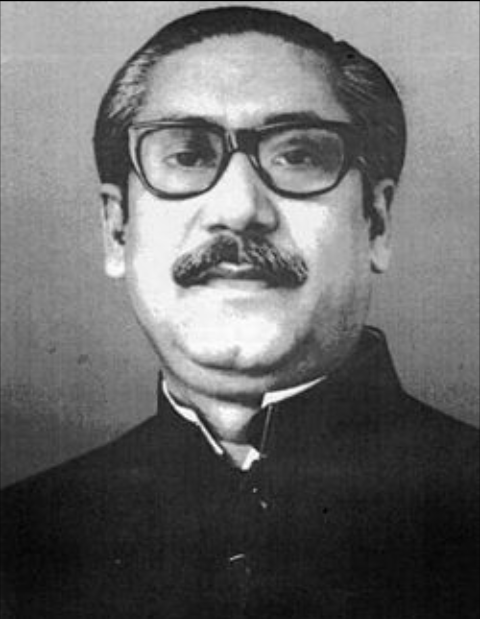 Posted By: Swapnil Sansaron: August 15, 2020In: ENGLISH NEWSNo Comments
Print Email
Sheikh Mujibur Rahman  (17 March 1920) was a politician and statesman who was the founding leader of Bangladesh.He headed the Awami League and served as the first President of Bangladesh, and later as Prime Minister. He is popularly referred to as Sheikh Mujib (shortened as Mujib or Mujibur, not Rahman), with the honorary title of Bangabandhu (“Friend of Bengal”), and widely revered in Bangladesh as the Father of the Nation, Although Opposition Prefer to say Founder of Nation instead of Father of the Nation. His eldest daughter, Sheikh Hasina, is the present leader of the Awami League and the current Prime Minister of Bangladesh.
As a student political leader, Mujib rose in Bengali politics as a charismatic and forceful orator. An advocate of socialism, he became popular for his opposition to the ethnic and institutional discrimination against Bengalis, who comprised the majority of Pakistan’s population.He demanded increased provincial autonomy, and strongly opposed the military rule of Field Marshal Ayub Khan.
At the heightening of sectional tensions, Mujib outlined a 6-point autonomy plan, which West Pakistan perceived as separatism. He was tried in 1968 for allegedly conspiring with the Indian government but was acquitted. Despite leading his party to a major victory in the 1970 elections, Mujib was not invited to form the government. On March 26, 1971, he was arrested by the Pakistan Army in the early hours of Operation Searchlight. During his nine-month detention, guerrilla war erupted between Pakistan Army and Bengali nationalists. An all-out war between the Pakistan Army and Bangladesh-India Allied Forces led to the liberation of Bangladesh and its founding as an independent nation in 1971.
After his release, Mujib assumed office as a provisional president, and later prime minister. Even as a constitution was adopted that proclaimed a secular democracy, Mujib struggled to address the challenges of intense poverty and unemployment in the country, coupled with rampant corruption. In the aftermath of the 1974 famine and amidst rising political agitation, he banned other political parties and most of the newspapers, except for four that were owned by the state. He established a one-party state. Seven months later, Mujib was assassinated by a group of junior army officers on 15 August,1975, along with most of his family. After the coup, a military government was established.Agency.