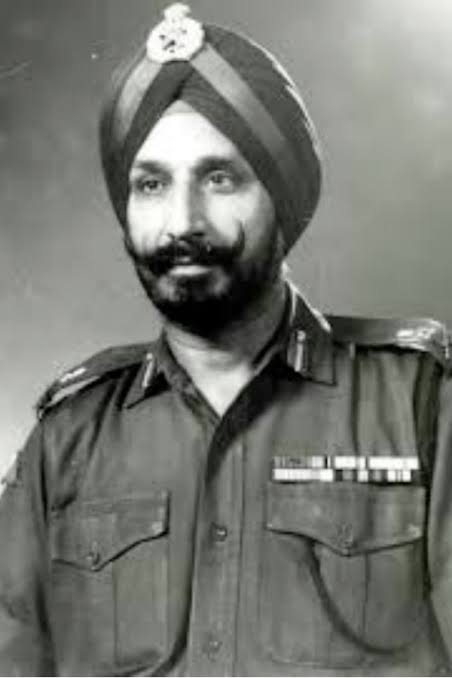 Lieutenant General Jagjit Singh Arora  was the General Officer Commanding-in-Chief (GOC-in-C) of the Eastern Command of the Indian Army during the Indo-Pakistani War of 1971. He led the ground forces campaign in the Eastern front of the war, which led to an overwhelming defeat of the Pakistan Army and the creation of Bangladesh.

Jagjit Singh Arora   was born on 13 February, 1916  in Kala Gujran, Jhelum district,  (now, Pakistan).  He was the son of an engineer in Kala Gujran, Jhelum district, in western Punjab in what is now Pakistan.Jagjit Singh Arora  graduated from the Indian Military Academy in 1939 and was commissioned into the 1st Battalion, 2nd Punjab Regiment. He saw action in the Burma Campaign during World War II.
After Independence and the ensuing Partition of India, he opted to join the Indian Army and was a commissioned officer in the Punjab Regiment during the Indo-Pakistani War of 1947.He had reached the rank of Brigadier by the time he was involved in the Sino-Indian War in 1962. He also participated in the Indo-Pakistani War of 1965.
In 1969, Lieutenant General agjit Singh Arora   was appointed the General Officer Commanding-in-Chief (GOC-in-C) of the Indian Army’s Eastern Command. Lt. Gen. JFR Jacob writes in his book “An Odyssey in War And Peace” that Manekshaw didn’t have confidence in Gen. Aurora and hence appointed Gen. Jacob as Staff Officer in the Eastern Command (India).

On Gen. Jacob questioning that why then Gen. Manekshaw chose GenJagjit Singh Arora  as GOC CIC EC, Manekshaw replied “I like to have him (Jagjit Singh Arora ) as a doormat.
In March 1971, the Pakistan Army launched Operation Searchlight to curb the Bengali nationalist movement in East Pakistan. The operation resulted in the 1971 Bangladesh atrocities, including the systematic murder of Bengali intellectuals by the Pakistan Army. The ensuing violence led to almost 10 million Bengali refugees fleeing from East Pakistan into India. A spontaneous Bengali guerrilla force, the Mukti Bahini, was formed in response. This force along with the newly formed Bangladesh Forces, consisting of Bengali defectors from the Pakistan Army under the command of Colonel Mohammad Ataul Ghani Osmany, were engaged in escalating hostilities with the Pakistani Army.
For the next eight months, with tensions escalating between India and Pakistan and anticipating possible hostilities, Aurora oversaw the logistical preparations of the Indian Army on the Eastern front, including the improvement of roads, communications and bridges, as well as the movement of 30,000 tons of supplies close to the border with East Pakistan.
At the outbreak of the war on 3 December 1971, as the GOC-in-C of the Eastern Command, Aurora oversaw the Indian ground forces into battle in East Pakistan. In a meticulously planned operation, forces under Aurora’s command formed numerous small combat teams and launched a four-front attack with the strategy of confronting and defeating the Pakistani forces on selected fronts, while bypassing Pakistani forces on others. In under two weeks, his forces advanced from the Indian border to capture Dhaka, the capital of East Pakistan.The Unified Commander of Pakistan Armed Forces’s Eastern Military High Command, Lieutenant General Amir Abdullah Khan Niazi was forced to sign an unconditional Instrument of Surrender. The 90,000 Pakistani troops under Niazi’s command surrendered to General Aurora as prisoners of war.Pakistan lost almost 57,000 square miles (150,000 km2) of its territory and 70 million of its people to the newly formed nation of Bangladesh.
Jagjit Singh Arora was honored with the Param Vishisht Seva Medal and the Padma Bhushan for his role in the war. He retired from the Indian Army in 1973. Lt. Gen. JFR Jacob has written in his book “An Odyssey In War And Peace” that Gen.Jagjit Singh Arora approached then Prime Minister Indira Gandhi for governorship of a state but she declined. Jacob also writes that Gen Aurora and Mrs. Aurora were regular part of social life of Calcutta.
In 1984, Jagjit Singh Arora fiercely criticized the Indian National Congress leadership following Operation Blue Star, which flushed out armed Sikh militants who had taken up positions inside the Golden Temple in Amritsar but also caused extensive damage to the holiest shrine of Sikhism. Subsequently, he spent several years as a Member of Parliament in the Rajya Sabha, the upper House of the Indian Parliament, for the Akali Dal, a Sikh political party.
Jagjit Singh Arora was also an active member of the Citizen’s Justice Committee which provided pro bono assistance to Sikh victims of the 1984 anti-Sikh riots, who were attacked or killed by mobs orchestrated by the Congress Party in New Delhi, following the assassination of Prime Minister Indira Gandhi by her Sikh bodyguards.
He is survived by his son Kiranjeet Singh Rana, his grand daughters Dipika Kalra, Nonita Kalra and Sonam Kalra. He has a great grandson Ahan Kalra Mathur.
Jagjit Singh Arora died on May 3, 2005, at age 89, in New Delhi. He was survived by a son and a daughter. After his death, the gratitude of Bangladesh to General Aurora was emphasised in a message to India, from Morshed Khan, the Bangladeshi Foreign Minister, stating: “Jagjit Singh Arora will be remembered in the history of Bangladesh for his contribution during our war of liberation in 1971, when he led the allied forces.”
The site of the Pakistani surrender, where Lt. Gen. Niazi signed the Instrument of Surrender with Lt. Gen. Jagjit Singh Arora  on December 16, 1971 is being converted into what will be called Independence Square. The plans include the installation of an eternal flame.swapnil sansar