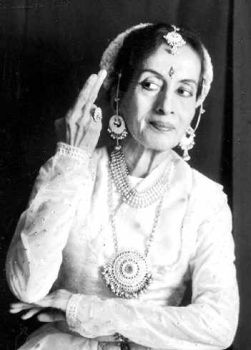 Where art rises above skill and virtuosity, the name of Damayanti Joshi, a leading exponent of Kathak occurs to the lovers of Indian dance. She was born in 5 September 1932 at BomBay Now Mumbai and started dancing very early in life. As child she was trained in Kathak. She has danced in China, Japan, Sudan, Egypt, Syria, Iran, Turkey, Greece, and for the United Nations troops at Gaza.

Damayanti Joshi  was a noted Indian classical dancer in the Kathak dance form. She began in the 1930s dancing in Madame Menaka’s troupe, which travelled to many parts of the world. She learnt Kathak from Sitaram Prasad of Jaipur Gharana and became an adept dancer at a very young age, and later trained under from Acchan Maharaj, Lacchu Maharaj and Shambhu Maharaj of Lucknow gharana, thus imbibing nuances from both the traditions. She became independent in the 1950s and achieved prominence in the 1960s, before turning into a guru at her dance school in Bombay Now Mumbai.

She grew up in the household of General Dr Sahib Singh Sokhey and his wife Leila Sokhey (born Roy) who became known as Madame Menaka. Manaka had lost her own child and she had decided to adopt Joshi. Joshi’s mother Vatsala Joshi would not give up her daughter and they agreed to be joint guardians. In Manaka’s troupe she learnt about Kathak from Pandit Sitaram Prasad as she toured in Menaka’s troupe. After ten years, when she was 15 she had performed in European major cities. The Sokheys employed Damayanti’s mother and Joshi received an education. Among her contemporaries at Madame Menaka’s was Shirin Vajifdar, a pioneering classical dancer from the Parsi community.She was the first student at Mumbai’s Sri Rajarajeswari Bharata Natya Kala Mandir, where she learned Bharat Natyam from Guru T. K. Mahalingam Pillai, doyen among nattuvanars.

She also taught Kathak at Indira Kala Vishvaidyalaya, Khairagarh, and Kathak Kendra in Lucknow. She has been honoured with the Sangeet Natak Akademi Award (1968) and the Padma Shri (1970). She was also the guru to Bireshwar Gautam.She has been featured in the documentary on Kathak in 1971 by Films Division, Government of India, and another film entitled “Damayanti Joshi” directed by Hukumat Sarin was made in 1973.She died on 19 September 2004 at her home in Dadar, Mumbai, a year after she had suffered a stroke.Agency.