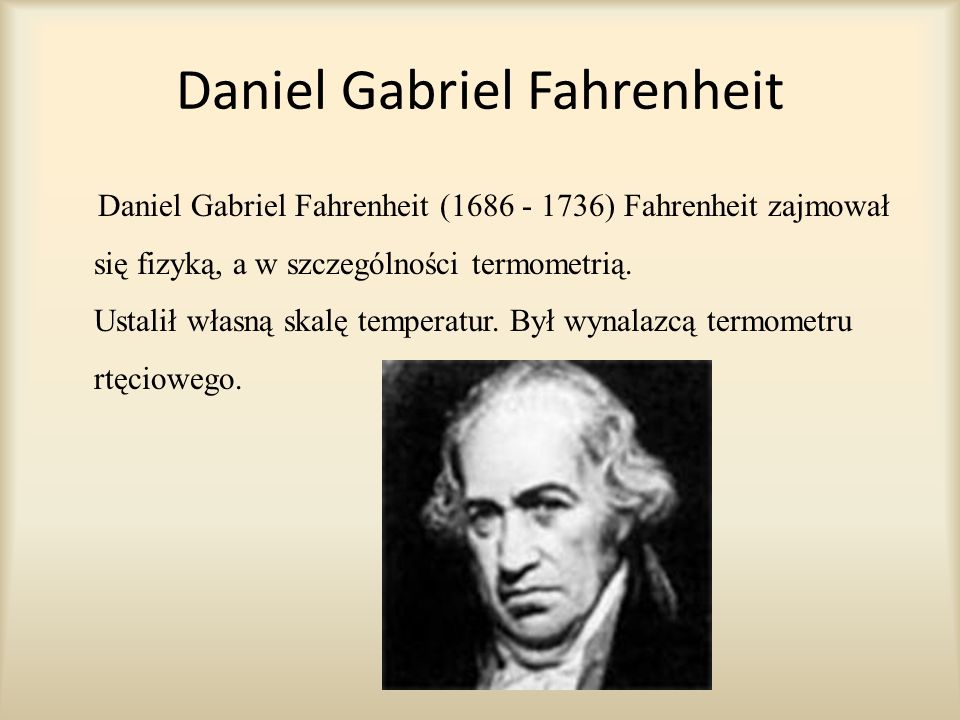 Daniel Gabriel Fahrenheit FRS    was a Dutch-German-Polish physicist, inventor, and scientific instrument maker. Fahrenheit was born in Danzig/Gdańsk, a predominantly German-speaking Hanseatic city in the Pomeranian Voivodeship of the Polish–Lithuanian Commonwealth, but lived most of his life in the Dutch Republic(1701–1736) and was one of the notable figures in the Golden Age of Dutch science and technology.

A pioneer of exact thermometry, he helped lay the foundations for the era of precision thermometry by inventing the mercury-in-glass thermometer (first practical, accurate thermometer) and Fahrenheit scale (first standardized temperature scale to be widely used). In other words, Fahrenheit’s inventions ushered in the first revolution in the history of thermometry (branch of physics concerned with methods of temperature measurement). From the early 1710s until the beginnings of the electronic era, mercury-in-glass thermometers were among the most reliable and accurate thermometers ever invented.

Fahrenheit was born ( 14 May 1686) in the city of Danzig (Gdańsk), Pomeranian Voivodeship in the Polish–Lithuanian Commonwealth, but lived most of his life in the Dutch Republic. The Fahrenheits were a German Hanse merchant family who had lived in several Hanseatic cities. Fahrenheit’s great-grandfather had lived in Rostock, and research suggests that the Fahrenheit family originated in Hildesheim.Daniel’s grandfather moved from Kneiphof in Königsberg (present-day Kaliningrad) to Danzig and settled there as a merchant in 1650. His son, Daniel Fahrenheit , married Concordia Schumann, daughter of a well-known Danzig business family. Daniel was the eldest of the five Fahrenheit children (two sons, three daughters) who survived childhood. His sister, Virginia Elizabeth Fahrenheit, married Benjamin Ephraim Krueger of an aristocratic family from Danzig.

Daniel Gabriel began training as a merchant in Amsterdam after his parents died on 14 August 1701 from eating poisonous mushrooms. However, Fahrenheit’s interest in natural science led him to begin studies and experimentation in that field. From 1717, he traveled to Berlin, Halle, Leipzig, Dresden, Copenhagen, and also to his hometown, where his brother still lived. During that time, Fahrenheit met or was in contact with Ole Rømer, Christian Wolff, and Gottfried Leibniz. In 1717, Fahrenheit settled in The Hague as a glassblower, making barometers, altimeters, and thermometers. From 1718 onwards, he lectured in chemistry in Amsterdam. He visited England in 1724 and was the same year elected a Fellow of the Royal Society.Fahrenheit died in The Hague and was buried there at the Kloosterkerk (Cloister Church).

Thermometer with Fahrenheit (symbol °F) and Celsius (symbol °C) units. The application of mercury (1714) and Fahrenheit scale (1724) for liquid-in-glass thermometersushered in a new era of accuracy and precision in thermometry.

According to Fahrenheit’s 1724 article, he determined his scale by reference to three fixed points of temperature. The lowest temperature was achieved by preparing a frigorific mixture of ice, water, and ammonium chloride (a salt), and waiting for it to reach equilibrium. The thermometer then was placed into the mixture and the liquid in the thermometer allowed to descend to its lowest point. The thermometer’s reading there was taken as 0 °F. The second reference point was selected as the reading of the thermometer when it was placed in still water when ice was just forming on the surface. This was assigned as 32 °F. The third calibration point, taken as 96 °F, was selected as the thermometer’s reading when the instrument was placed under the arm or in the mouth.

Fahrenheit came up with the idea that Mercury boils around 300 degrees on this temperature scale. Work by others showed that water boils about 180 degrees above its freezing point. The Fahrenheit scale later was redefined to make the freezing-to-boiling interval exactly 180 degrees,[9] a convenient value as 180 is a highly composite number, meaning that it is evenly divisible into many fractions. It is because of the scale’s redefinition that normal body temperature today is taken as 98.6 degrees, whereas it was 96 degrees on Fahrenheit’s original scale.

The Fahrenheit scale was the primary temperature standard for climatic, industrial and medical purposes in English-speaking countries until the 1970s, nowadays replaced by the Celsius scale long used in the rest of the world. Fahrenheit was died on – 16 September 1736.Agency.