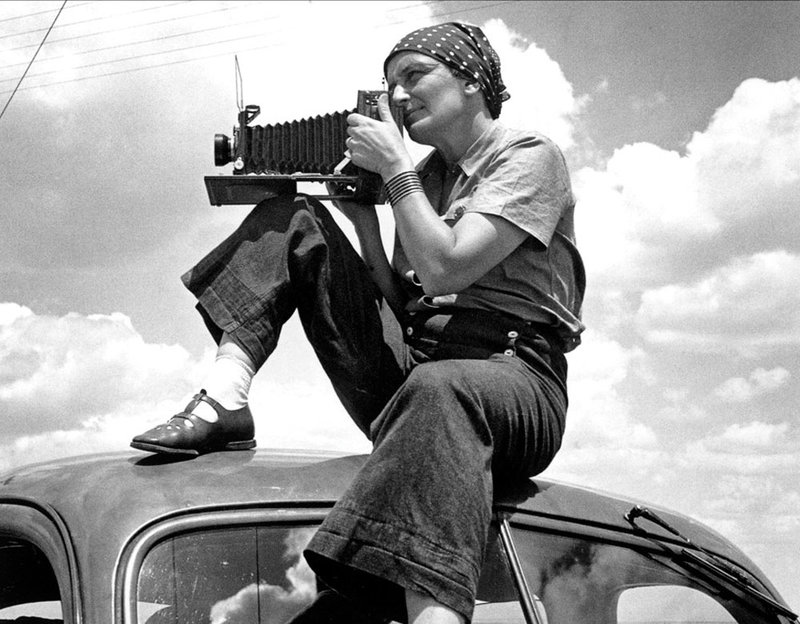 Dorothea Margaretta Nutzhorn was born on May 26, 1895, at 1041 Bloomfield Street, Hoboken, New Jersey to second-generation German immigrants Heinrich Nutzhorn and Johanna Lange. She had a younger brother, Martin. She dropped her middle name and assumed her mother’s maiden name after her father abandoned the family when she was twelve years old, one of two traumatic events early in her life. The other trauma was her contraction of polio at age seven, which left her with a weakened right leg and a permanent limp. “It formed me, guided me, instructed me, helped me and humiliated me,” Lange once said of her altered gait. “I’ve never gotten over it, and I am aware of the force and power of it.”
Dorothea Lange graduated from the Wadleigh High School for Girls, and although she had never operated or owned a camera, she was adamant that she would become a photographer upon graduating from high school. Lange was educated in photography at Columbia University in New York City in a class taught by Clarence H. White. She was informally apprenticed to several New York photography studios, including that of the famed Arnold Genthe. In 1918, she left New York with a female friend to travel the world, but was forced to end the trip in San Francisco due to a robbery, and settled there, working as a photograph finisher at a photographic supply shop. where she became acquainted with other photographers and met an investor that aided in the establishment of a successful portrait studio. This business supported Lange and her family for the next fifteen years.In 1920, she married the noted western painter Maynard Dixon, with whom she had two sons, Daniel, born in 1925, and John, born in 1930.

Lange’s early studio work mostly involved shooting portrait photographs of the social elite in San Francisco. At the onset of the Great Depression, Lange turned her lens from the studio to the street. Her photographs during this period bear kinship with John Steinbeck’s The Grapes of Wrath. Her studies of unemployed and homeless people, starting with White Angel Breadline (1933), which depicted a lone man facing away from the crowd in front of a soup kitchen run by a widow known as the White Angel, captured the attention of local photographers and led to her employment with the federal Resettlement Administration (RA), later called the Farm Security Administration (FSA).
In the last two decades of her life, Lange’s health declined. She suffered from gastric problems as well as post-polio syndrome, although the reoccurrence of the pain and weakness of polio was not yet recognized by most physicians.

Dorothea Lange died of esophageal cancer on October 11, 1965, in San Francisco, California, at age seventy. She was survived by her second husband, Paul Taylor, two children, three stepchildren, and numerous grandchildren and great-grandchildren. Three months later, the Museum of Modern Art in New York mounted a retrospective of her work, which Lange herself had helped to curate. It was the first one-person retrospective by a female photographer held at MoMA.

In 2003, Lange was inducted into the National Women’s Hall of Fame. In 2006, an elementary school was named in her honor in Nipomo, California, near the site where she had photographed Migrant Mother. In 2008, she was inducted into the California Hall of Fame, located at The California Museum for History, Women and the Arts; her son, Daniel Dixon, accepted the honor in her place. In October 2018, Lange’s hometown of Hoboken, New Jersey honored her with a mural depicting Lange and two other prominent women from Hoboken’s history, Maria Pepe and Dorothy McNeil.Agency.