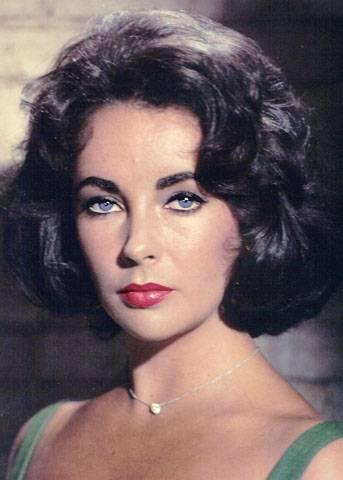 Elizabeth Rosemond Taylor was considered one of the last, if not the last, major star to have come out of the old Hollywood studio system. She was known internationally for her beauty, especially for her violet eyes, with which she captured audiences early on in her youth and kept the world hooked on with since.

Taylor was born on February 27, 1932 in London, England. Although she was born an English subject, her parents, Sara Sothern (née Sara Viola Warmbrodt) and Francis Lenn Taylor, were Americans, art dealers from St. Louis, Missouri (her father had gone to London to set up a gallery). Her mother had been an actress on the stage, but gave up that vocation when she married. Elizabeth lived in London until the age of seven, when the family left for the US when the clouds of war began brewing in Europe in 1939. They sailed without her father, who stayed behind to wrap up the loose ends of the art business.

The family relocated to Los Angeles, where Mrs. Taylor’s own family had moved. Mr. Taylor followed not long afterward. A family friend noticed the strikingly beautiful little Elizabeth and suggested that she be taken for a screen test. Her test impressed executives at Universal Pictures enough to sign her to a contract. Her first foray onto the screen was in There’s One Born Every Minute (1942), released when she was ten. Universal dropped her contract after that one film, but Elizabeth was soon picked up by MGM.

The first production she made with that studio was Lassie Come Home (1943), and on the strength of that one film, MGM signed her for a full year. She had minuscule parts in her next two films, The White Cliffs of Dover (1944) and Jane Eyre (1943) (the former made while she was on loan to 20th Century-Fox). Then came the picture that made Elizabeth a star: MGM’s National Velvet (1944). She played Velvet Brown opposite Mickey Rooney. The film was a smash hit, grossing over $4 million. Elizabeth now had a long-term contract with MGM and was its top child star. She made no films in 1945, but returned in 1946 in Courage of Lassie (1946), another success. In 1947, when she was 15, she starred in Life with Father (1947) with such heavyweights as William Powell, Irene Dunne and Zasu Pitts, which was one of the biggest box office hits of the year. She also co-starred in the ensemble film Little Women (1949), which was also a box office huge success.

Throughout the 1950s, Elizabeth appeared in film after film with mostly good results, starting with her role in the George Stevens film A Place in the Sun (1951), co-starring her good friend Montgomery Clift. The following year, she co-starred in Ivanhoe (1952), one of the biggest box office hits of the year. Her busiest year was 1954. She had a supporting role in the box office flop Beau Brummell (1954), but later that year starred in the hits The Last Time I Saw Paris (1954) and Elephant Walk (1954). She was 22 now, and even at that young age was considered one of the world’s great beauties. In 1955 she appeared in the hit Giant (1956) with James Dean.

Sadly, Dean never saw the release of the film, as he died in a car accident in 1955. The next year saw Elizabeth co-star with Montgomery Clift in Raintree County (1957), an overblown epic made, partially, in Kentucky. Critics called it dry as dust. In addition, Clift was seriously injured during the film, with Taylor helping save his life. Despite the film’s shortcomings and off-camera tragedy, Elizabeth was nominated for an Academy Award for her portrayal of Southern belle Susanna Drake. However, on Oscar night the honor went to Joanne Woodward for The Three Faces of Eve (1957).

In 1958 Elizabeth starred as Maggie Pollitt in Cat on a Hot Tin Roof (1958). The film received rave reviews from the critics and Elizabeth was nominated again for an Academy Award for best actress, but this time she lost to Susan Hayward in I Want to Live! (1958). She was still a hot commodity in the film world, though. In 1959 she appeared in another mega-hit and received yet another Oscar nomination for Suddenly, Last Summer (1959). Once again, however, she lost out, this time to Simone Signoret for Room at the Top (1959). Her Oscar drought ended in 1960 when she brought home the coveted statue for her performance in BUtterfield 8 (1960) as Gloria Wandrous, a call girl who is involved with a married man. Some critics blasted the movie but they couldn’t ignore her performance. There were no more films for Elizabeth for three years. She left MGM after her contract ran out, but would do projects for the studio later down the road. In 1963 she starred in Cleopatra (1963), which was one of the most expensive productions up to that time–as was her salary, a whopping $1,000,000. The film took years to complete, due in part to a serious illness during which she nearly died.

This was the film where she met her future and fifth husband, Richard Burton (the previous four were Conrad Hilton, Michael Wilding, Mike Todd–who died in a plane crash–and Eddie Fisher). Her next films, The V.I.P.s (1963) and The Sandpiper (1965), were lackluster at best. Elizabeth was to return to fine form, however, with the role of Martha in Who’s Afraid of Virginia Woolf? (1966). Her performance as the loudmouthed, shrewish, unkempt, yet still alluring Martha was easily her finest to date. For this she would win her second Oscar and one that was more than well-deserved. The following year, she and Burton co-starred in The Taming of the Shrew (1967), again giving winning performances. However, her films afterward were box office failures, including Reflections in a Golden Eye (1967), The Comedians (1967) Boom! (1968) (again co-starring with Burton), Secret Ceremony (1968), The Only Game in Town (1970), X, Y and Zee (1972), Hammersmith Is Out (1972) (with Burton again), Ash Wednesday (1973), Night Watch (1973), The Driver’s Seat (1974), The Blue Bird (1976) (considered by many to be her worst), A Little Night Music (1977), and Winter Kills (1979) (a controversial film which was never given a full release and in which she only had a small role). Since then, she has appeared in some movies, both theatrical and made-for-television, and a number of television programs. In February 1997, Elizabeth entered the hospital for the removal of a brain tumor. The operation was successful. As for her private life, she divorced Burton in 1974, only to remarry him in 1975 and divorce him, permanently, in 1976. She had two more husbands, U.S. Senator John Warner and construction worker Larry Fortensky, whom she met in rehab.

In 1959, Taylor converted to Judaism, and continued to identify herself as Jewish throughout her life, being active in Jewish causes. Upon the death of her friend, actor Rock Hudson, in 1985, she began her crusade on the behalf of AIDS sufferers. In the 1990s, she also developed a successful series of scents. In her later years, her acting career was relegated to the occasional TV-movie or TV guest appearance.