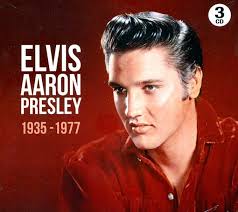 Elvis Aaron Presley was born on January 8, 1935 in East Tupelo, Mississippi, to Gladys Presley (née Gladys Love Smith) and Vernon Presley (Vernon Elvis Presley). He had a twin brother who was stillborn. In 1948, Elvis and his parents moved to Memphis, Tennessee where he attended Humes High School. In 1953, he attended the senior prom with the current girl he was courting, Regis Wilson. After graduating from high school in Memphis, Elvis took odd jobs working as a movie theater usher and a truck driver for Crown Electric Company. He began singing locally as “The Hillbilly Cat”, then signed with a local recording company, and then with RCA in 1955.

Elvis did much to establish early rock and roll music. He began his career as a performer of rockabilly, an up-tempo fusion of country music and rhythm and blues, with a strong backbeat. His novel versions of existing songs, mixing ‘black’ and ‘white’ sounds, made him popular – and controversial – as did his uninhibited stage and television performances. He recorded songs in the rock and roll genre, with tracks like “Jailhouse Rock” and “Hound Dog” later embodying the style. Presley had a versatile voice and had unusually wide success encompassing other genres, including gospel, blues, ballads and pop music. Teenage girls became hysterical over his blatantly sexual gyrations, particularly the one that got him nicknamed “Elvis the Pelvis” (television cameras were not permitted to film below his waist).

In 1956, following his six television appearances on The Dorsey Brothers’ “Stage Show”, Elvis was cast in his first acting role, in a supporting part in Love Me Tender (1956), the first of 33 movies he starred in.

In 1958, Elvis was drafted into the military, and relocated to Bad Nauheim, Germany. There he met 14-year old army damsel Priscilla Ann Wagner (Priscilla Presley), whom he would eventually marry after an eight-year courtship, and by whom he had his only child, Lisa Marie Presley. Elvis’ military service and the “British Invasion” of the 1960s reduced his concerts, though not his movie/recording income.

Through the 1960s, Elvis settled in Hollywood, where he starred in the majority of his thirty-three movies, mainly musicals, acting alongside some of the most well known actors in Hollywood. Critics panned most of his films, but they did very well at the box office, earning upwards of $150 million total. His last fiction film, Change of Habit (1969), deals with several social issues; romance within the clergy, an autistic child, almost unheard of in 1969, rape, and mob violence. It has recently received critical acclaim.

Elvis made a comeback in the 1970s with live concert appearances starting in early 1970 in Las Vegas with over 57 sold-out shows. He toured throughout the United States, appearing on-stage in over 500 live appearances, many of them sold out shows. His marriage ended in divorce, and the stress of constantly traveling as well as his increasing weight gain and dependence upon stimulants and depressants took their toll.

Elvis Presley died at age 42 on August 16, 1977 at his mansion in Graceland, near Memphis, shocking his fans worldwide. At the time of his death, he had sold more than 600 million singles and albums. Since his death, Graceland has become a shrine for millions of followers worldwide. Elvis impersonators and purported sightings have become stock subjects for humorists. To date, Elvis Presley is the only performer to have been inducted into three separate music ‘Halls of Fame’. Throughout his career, he set records for concert attendance, television ratings and recordings sales, and remains one of the best-selling and most influential artists in the history of popular music.