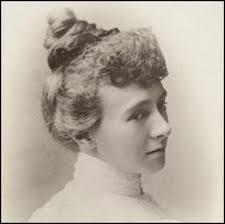 Emily Wilding Davison  was an English suffragette who fought for votes for women in Britain in the early twentieth century. A member of the Women’s Social and Political Union (WSPU) and a militant fighter for her cause, she was arrested on nine occasions, went on hunger strike seven times and was force fed on forty-nine occasions. She died after being hit by King George V’s horse Anmer at the 1913 Derby when she walked onto the track during the race.

Davison grew up in a middle-class family, and studied at Royal Holloway College, London, and St Hugh’s College, Oxford, before taking jobs as a teacher and governess. She joined the WSPU in November 1906 and became an officer of the organisation and a chief steward during marches. She soon became known in the organisation for her daring militant action; her tactics included breaking windows, throwing stones, setting fire to postboxes and, on three occasions, hiding overnight in the Palace of Westminster—including on the night of the 1911 census. Her funeral on 14 June 1913 was organised by the WSPU. A procession of 5,000 suffragettes and their supporters accompanied her coffin and 50,000 people lined the route through London; her coffin was then taken by train to the family plot in Morpeth, Northumberland.

Davison was a staunch feminist and passionate Christian, and considered that socialism was a moral and political force for good. Much of her life has been interpreted through the manner of her death. She gave no prior explanation for what she planned to do at the Derby and the uncertainty of her motives and intentions has affected how she has been judged by history. Several theories have been put forward, including accident, suicide, or an attempt to pin a suffragette banner to the king’s horse.
Emily Wilding Davison was born at Roxburgh House, Greenwich, in south-east London on 11 October 1872. Her parents were Charles Davison, a retired merchant, and Margaret, née Caisley, both of Morpeth, Northumberland. At the time of his marriage to Margaret in 1868, Charles was 45 and Margaret was 19. Emily was the third of four children born to the couple; her younger sister died of diphtheria in 1880 at the age of six. The marriage to Margaret was Charles’s second; his first marriage produced nine children before the death of his wife in 1866.

The family moved to Sawbridgeworth, Hertfordshire, while Davison was still a baby; until the age of 11 she was educated at home. When her parents moved the family back to London she went to a day school, then spent a year studying in Dunkirk, France. When she was 13 she attended Kensington High School and later won a bursary to Royal Holloway College in 1891 to study literature. Her father died in early 1893 and she was forced to end her studies because her mother could not afford the fees of £20 a term.

On leaving Holloway, Davison became a live-in governess, and continued studying in the evenings. She saved enough money to enrol at St Hugh’s College, Oxford, for one term to sit her finals;she achieved first-class honours in English, but could not graduate because degrees from Oxford were closed to women. She worked briefly at a church school in Edgbaston between 1895 and 1896, but found it difficult and moved to Seabury, a private school in Worthing, where she was more settled; she left the town in 1898 and became a private tutor and governess to a family in Northamptonshire. In 1902 she began reading for a degree at the University of London; she graduated with third-class honours in 1908.

In 1968 a one-act play written by Joice Worters, Emily, was staged in Northumberland, focusing on the use of violence against the women’s campaign. Davison is the subject of an opera, Emily (2013), by the British composer Tim Benjamin, and of “Emily Davison”, a song by the American rock singer Greg Kihn. Davison also appears as a supporting character in the 2015 film Suffragette, in which she is portrayed by Natalie Press. Her death and funeral form the climax of the film. In January 2018 the cantata Pearl of Freedom, telling the story of Davison’s suffragette struggles, was premiered. The music was by the composer Joanna Marsh; the librettist was David Pountney.

In 1990 the Labour MPs Tony Benn and Jeremy Corbyn placed a commemorative plaque inside the cupboard in which Davison had hidden eighty years earlier. In April 2013 a plaque was unveiled at Epsom racecourse to mark the centenary of her death. In January 2017 Royal Holloway announced that its new library would be named after her. The statue of Millicent Fawcett in Parliament Square, London, unveiled in April 2018, features Davison’s name and picture, along with those of 58 other women’s suffrage supporters, on the plinth of the statue. The Women’s Library, at the London School of Economics, holds several collections related to Davison. They include her personal papers and objects connected to her death.Agency.