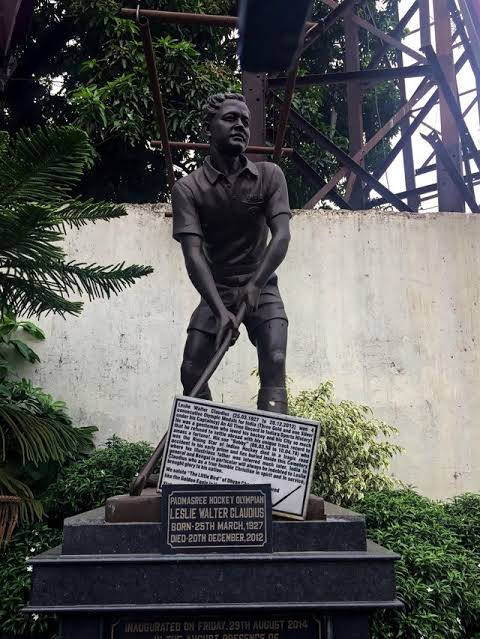 Leslie Claudius shares with Udham Singh the distinction of being one of only two Indian players to win four Olympic medals in field hockey. To his gold medals in 1948, 1952 and 1956, he added silver in 1960 when he captained the team. He was the first player ever to earn 100 caps, and competed for India, in addition to the Olympics, on their European tour of 1949, Malaysian tour of 1952, Australian and New Zealand tours of 1955, and at the 3rd Asian Games in 1958. After the 1960 Olympics, he continued to compete domestically, retiring after the 1965 season. In 1971, he became the sixth Indian hockey player to be given the prestigious Padma Shri Civil award by the Indian government.

Leslie Claudius was initially interested in football and as an accomplished player, he got a chance to play for the Bengal and Nagpur Railway. But, his talent in field hockey was spotted by Dickie Carr, who was a part of the Indian team that won the gold medal at the 1936 Olympics. Claudius was then inducted into the Bengal and Nagpur Railway hockey team that Carr was a part of. The team finished second in the Beighton Cup and Claudius quit football for hockey.

Leslie Claudius was a member of India’s generation of hockey that won the Olympic gold in 1948, 1952 and 1956 and silver in 1960. He was the first hockey player to have competed in four Olympics and also the first to earn a hundred international caps. He captained the Indian team for the first team in 1959, with Dhyan Chand, often considered India’s greatest hockey player ever as the coach, and led them to the second-place finish at the 1960 Olympics in Rome.
Claudius was appointed as the manager of the Indian team in 1978 for the Bangkok Asian Games.
Claudius was of Anglo-Indian descent. His son, Robert, was also an Indian international who represented his country at the World Cup in Mexico in 1978. Leslie died after a prolonged battle with cirrhosis of liver. Leslie had three more sons, one who stayed with him in Kolkata and two who live in Melbourne.

In 1971 he was awarded the Padma Shri.Mention in the Guinness Book of World Records along with Udham Singh for having won the most number of Olympic medals in field hockey.In 2011 The West Bengal Chief Minister Mamata Banerjee presented the Bharat Gaurav award instituted by East Bengal Club to Leslie Claudius.For the 2012 Olympics, the Bushey tube station was renamed after Claudius in the special “Olympic Legends Map”. He was one of six all-time hockey greats who were honored in this manner.
In 2012 he was awarded The Banga Bibhushan.
Claudius died in Kolkata on 20 December 2012, after a prolonged battle with cirrhosis of liver. He was survived by his wife and three sons. He is buried in Lower Circular Road cemetery, Kolkata.