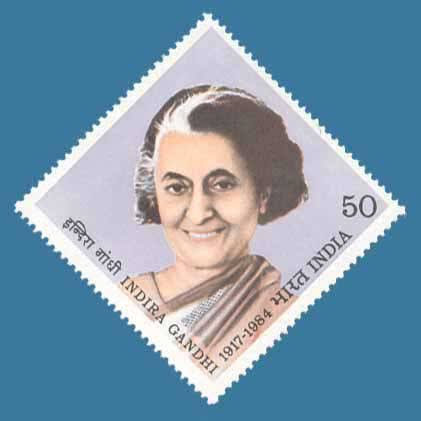 Indira Priyadarshini Gandhi    who served as the third Prime Minister of India for three consecutive terms (1966–77) and a fourth term (1980–84). Gandhi was the second female head of government in the world after Sirimavo Bandaranaike of Sri Lanka, and she remains as the world’s second longest serving female Prime Minister as of 2012. She was the first woman to become prime minister in India.
Indira ji was the only child of Jawaharlal Nehru, the first prime minister of independent India. She adhered to the quasi-socialist policies of industrial development that had been begun by her father. Indira ji established closer relations with the Soviet Union, depending on that nation for support in India’s long-standing conflict with Pakistan. She was also the only Indian Prime Minister to have declared state of emergency in order to ‘rule by decree’ and the only Indian Prime Minister to have been imprisoned after holding that office. She was assassinated by her bodyguards in retaliation for ordering Operation Blue Star.The day before her death Indira Gandhi visited Orissa on 30 October 1984 where she gave her last speech: “I am alive today, I may not be there tomorrow. I shall continue to serve till my last breath and when I die every drop of my blood will strengthen India and keep a united India alive.”Indira Gandhi’s last speech at Bhubaneswar Indira Gandhi delivered her last speech at the then Parade Ground in front of the Secretariat of Orissa. After her death, the Parade Ground was converted to the Indira Gandhi Park which was inaugurated by her son, Rajiv Gandhi. 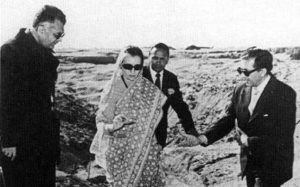 On 31 October 1984, two of . Indira ji bodyguards, Satwant Singh and Beant Singh, shot her with their service weapons in the garden of the Prime Minister’s residence at 1 Safdarjung Road, New Delhi. The shooting occurred as she was walking past a wicket gate guarded by Satwant and Beant. She was to have been interviewed by the British actor Peter Ustinov, who was filming a documentary for Irish television. Beant Singh shot her three times using his side-arm, and Satwant Singh fired 30 rounds Beant Singh and Satwant Singh dropped their weapons and surrendered. Afterwards they were taken away by other guards into a closed room where Beant Singh was shot dead. Kehar Singh was later arrested for conspiracy in the attack. Both Satwant and Kehar were sentenced to death and hanged in Delhi’s Tihar jail.
Indira Gandhi was brought at 9:30 AM to the All India Institute of Medical Sciences, where doctors operated on her. She was declared dead at 2:20 PM. The post-mortem examination was conducted by a team of doctors headed by Dr. T D Dogra. Dr. Dogra stated that as many as 30 bullet wounds were sustained by Indira Gandhi, from two sources, a Sten gun and a pistol. The assailants had fired 31 bullets at her, of which 30 had hit; 23 had passed through her body while 7 were trapped inside her. Dr. Dogra extracted bullets to establish the identity of the weapons and to correlate each weapon with the bullets recovered by ballistic examination. The bullets were matched with respective weapons at CFSL Delhi. Subsequently Dr. Dogra appeared in the court of  Mahesh Chandra as an expert witness (PW-5), and his testimony lasted several sessions. The cross examination was conducted by  P N Lekhi, the defence counsel.
Indira ji was cremated on 3 November near Raj Ghat. Her funeral was televised live on domestic and international stations, including the BBC. Following her cremation, millions of Sikhs were displaced and nearly three thousand were killed in anti-Sikh riots. Agency.