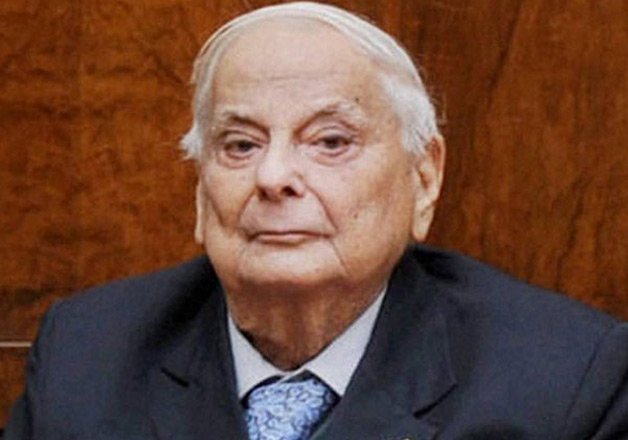 Lieutenant General Jack Farj Rafael “J. F. R.” Jacob, PVSM (1924 – 13 January 2016) was a Jewish Indian Army officer. He was best known for the role he played in Bangladesh’s victory in the Liberation War of 1971 and the Liberation of Bangladesh. Jacob, then a Major General, served as the Chief of Staff of the Indian Army’s Eastern Command during the war. During his 36-year career in the army, he also fought in World War II and the Indo-Pakistan War of 1965. He later served as the Governor of the Indian states of Goa and Punjab.

Jacob was born in Calcutta (now Kolkata), Bengal Presidency, British India, in 1924. His family were deeply religious Baghdadi Jews, originally from Iraq, who settled in Calcutta in the middle of the 18th century. Jacob’s father, Elias Emanuel, was an affluent businessman. After his father became sick, Jacob was sent at the age of nine to Victoria School, a boarding school in Kurseong near Darjeeling. From then on, he went home only on school holidays.

Jacob, motivated by reports of the Holocaust of European Jews during World War II, enlisted in the British Indian Army in 1942. His father objected to his enlisting. He said in 2010, “I am proud to be a Jew, but am Indian through and through.”

Jacob graduated from the Officer’s Training School in Mhow in 1942 and was posted to northern Iraq in anticipation of a possible German attempt to seize the oil fields of Kirkuk.

In 1943, Jacob was transferred to an Artillery brigade that was dispatched to the Tunisia Campaign to reinforce the British Army against Field Marshal Erwin Rommel’s Afrika Korps. The brigade arrived after the Axis surrender. From 1943 to the end of the war, Jacob’s unit fought in the Burma Campaign against the Japanese Empire. In the wake of Japan’s defeat, he was assigned to Sumatra.

After World War II, Jacob attended and graduated from artillery schools in England and the United States, specializing in advanced artillery and missiles. He returned to India following the partition, and joined the Indian Army. He was promoted to Brigadier in 1963. During the Indo-Pakistani War of 1965, he commanded an infantry division, which later became the 12th Infantry Division, in the Indian state of Rajasthan. During this period, Jacob composed an Indian Army manual on desert warfare.

Jacob was promoted to Major General in 1967. In 1969, he was appointed Chief of Staff, Eastern Command, by General (later Field Marshal) Sam Manekshaw. Jacob’s immediate superior was Lieutenant General Jagjit Singh Aurora, General Officer Commanding-in-Chief (GOC-in-C) of the Eastern Command. Jacob was soon tasked with dealing with the mounting insurgency in Northeast India.

Lt Gen A A K Niazi signing the Instrument of Surrender under the gaze of Lt Gen J S Aurora. Standing immediately behind (L-R) Vice Admiral Krishnan, Air Marshal Dewan, Lt. Gen Sagat Singh, Maj Gen JFR Jacob (with Flt Lt Krishnamurthy peeping over his shoulder). Veteran newscaster, Surojit Sen of All India Radio, is seen holding a microphone on the right.
Jacob gained prominence when as Major General he served as the Chief of Staff of the Indian Army’s Eastern Command that defeated the Pakistan Army in East Pakistan during the 1971 Bangladesh Liberation War. Jacob was awarded a commendation of merit for his role.

In March 1971, the Pakistan Army launched Operation Searchlight in East Pakistan. The action led to over 10 million refugees entering India, fuelling tensions between India and Pakistan. By the monsoon season, as Chief of Staff, Jacob was tasked with drawing the contingency plans for a possible conflict. After consulting with superior officers, Jacob developed a plan for engaging Pakistan in a “war of movement” in the difficult and swampy terrain of East Pakistan.

An initial plan, given to the Eastern Command by General (later Field Marshal) Sam Manekshaw, involved an incursion into East Pakistan and the capture of the provinces of Chittagong and Khulna. Senior Indian Army officers were reluctant to execute an aggressive invasion for fears of early ceasefire demands by the United Nations and a looming threat posed by China. That, together with the difficulty of navigating the marshy terrain of East Pakistan through three wide rivers, led the commanders to initially believe that the capture of all of East Pakistan was not possible. Jacob disagreed; his “war of movement” plan aimed to take control of all of East Pakistan. Jacob felt that the capital Dhaka was the geopolitical centre of the region, and that any successful campaign had to involve the eventual capture of Dhaka. Realizing that the Pakistani Army commander, Lt. General A. A. K. Niazi, was going to fortify the towns and “defend them in strength”, his plan was to bypass intermediary towns altogether, neutralize Pakistan’s command and communication infrastructure, and use secondary routes reach Dhaka. Jacob’s plan was eventually approved by the Eastern Command.

The strategy eventually led to the capture of Dhaka. The Pakistani forces were selectively bypassed, their communication centers were captured and secured, and their command and control capabilities were destroyed. His campaign was planned for execution in three weeks, but was executed in under a fortnight.

Jacob understood that a protracted war would not be in India’s best interests. On 16 December, during a lull in the battle, Jacob sought permission to visit Niazi to seek his surrender. He flew to Dhaka and obtained an unconditional surrender from Niazi, who later accused Jacob of blackmailing him into the surrender by threatening to order the annihilation of Pakistani troops in the East by bombing. The war was a significant victory for India, with nearly 90,000 Pakistani soldiers surrendering to the Indian Army. Dhaka fell, despite that there were 26,400 Pakistani soldiers in the city and only 3,000 Indian soldiers in the immediate area.

A study of the campaign by Pakistan’s National Defence College concluded that “the credit really goes to General Jacob’s meticulous preparations in the Indian eastern command and to the implementation by his Corps commanders.”

General Jacob retired from the military in 1979, following 37 years of service and mandatory retirement age. According to the website Bharat Rakshak, Jacob has repeatedly asserted that the Bangladesh war was only successful because of his own efforts rather than those of Field Marshal Manekshaw or GOC-in-C Eastern Command, Lt Gen Jagjit Singh Aurora. After a career in the business world, he joined the Bharatiya Janata Party in the late 1990s and served as its security adviser. He was appointed as governor of the state of Goa, and later served as governor of Punjab.

He was appointed as the governor of Goa and later appointed the governor of Punjab. He was a supporter of improved India–Israel relations. When the Bharatiya Janata Party became part of the ruling coalition government of India in 1998, one of their first priorities was to improve relations with Israel, with which India has had formal diplomatic relations since 1992. In the run-up to 2004 election he postulated the implications of a win for Indian National Congress in terms of Indo–Israel relations as:

A victory by the Congress Party under the leadership of Sonia Gandhi…will not lead to any change in India’s policy toward Israel. The good relations will continue, and in certain area even grow deeper. If I had to rank the present-day level of relations between India and Israel, I would give them a 9 out of 10.

He supported the purchase and trade of military equipment and technology from Israel by India, particularly the purchase of Israeli “Arrow” Missiles, which he preferred over the U.S-made patriot missiles on account of the Arrows’ ability to intercept enemy missiles at higher altitudes.

He remained cautious about relations between India and Pakistan in light of the Pakistani media’s suggesting that military and intelligence cooperation between Israel and India, which they called a “Zionist threat” on Pakistan’s borders.

India has been attacked several times by Pakistan. We cannot take risks, and be unprepared for a surprise attack. India should be prepared for both Pakistan and China. Therefore, there is a need for anti-missile missiles. Due to the Pakistani danger and the threat of launch of missiles with nuclear warheads.

He was also positive about India’s recent economic growth and the capabilities of the young Indian generation. He said:

As a country, we are at the threshold of an economic explosion and, hence, at this moment, empowerment means most to those who hold the key to the future. I talk of the younger generation. Sound economic and strategic planning will bring about this change. Unfortunately, since our prosperity comes in bursts, good governance, in the form of dedicated politicians and bureaucrats, is essential to usher any changes.

On 13 January 2016, Jacob died at New Delhi’s Army Research & Referral Hospital due to pneumonia. He was laid to rest the following day in Delhi’s Jewish cemetery on Humayun Road. His funeral was attended by India’s Defence Minister, Information Minister, and foreign delegations.Agency