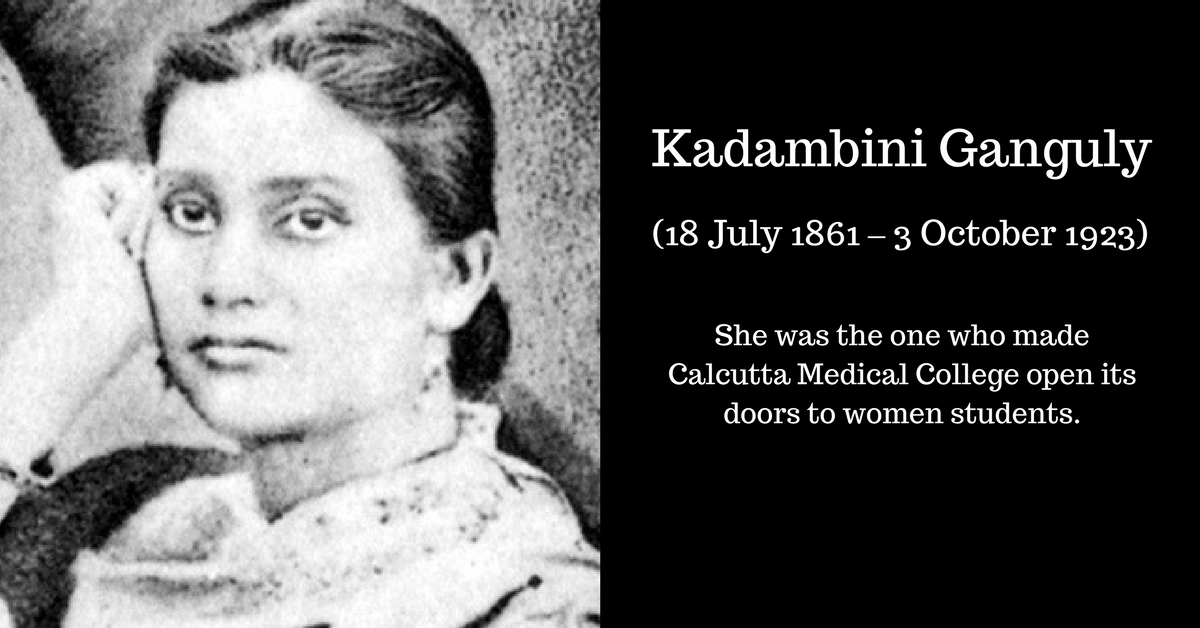 Kadambini Ganguly  was one of the first female graduates of the British Empire along with Chandramukhi Basu. She was also one of the first female physicians of South Asia to be trained in western medicine.
The daughter of Brahmo reformer Braja Kishore Basu, she was born on 18 July 1861 at Bhagalpur, Bihar in British India. The family was from Chandsi, in Barisal which is now in Bangladesh. Her father was headmaster of Bhagalpur School. He and Abhay Charan Mallick started the movement for women’s emancipation at Bhagalpur, establishing the women’s organisation Bhagalpur Mahila Samiti in 1863, the first in India.
Kadambini started her education at Banga Mahila Vidyalaya and while at Bethune School (established by Bethune) in 1878 became the first woman to pass the University of Calcutta entrance examination. It was partly in recognition of her efforts that Bethune College first introduced FA (First Arts), and then graduation courses in 1883. She and Chandramukhi Basu became the first graduates from Bethune College, and in the process became the first female graduates in the country and in the entire British Empire.
Ganguly studied medicine at the Calcutta Medical College. In 1886, she was given a Graduate of Bengal Medical College degree. She thus became one of the two, Anandi Gopal Joshi being the other, Indian women doctors qualified to practice western medicine. Also another Indian woman by the name of Abala Bose passed entrance in 1881 but was refused admission to the medical college and went to Madras (now Chennai) to study medicine but never graduated.
Kadambini overcame some opposition from the teaching staff, and orthodox sections of society. She went to the United Kingdom in 1892 and returned to India after qualifying as LRCP (Edinburgh), LRCS (Glasgow), and GFPS (Dublin). After working for a short period in Lady Dufferin Hospital, she started her own private practice.
In 1883 she married the Brahmo reformer and leader of women’s emancipation Dwarkanath Ganguly. They were actively involved in female emancipation and social movements to improve work conditions of female coal miners in eastern India. She was one of the six female delegates to the fifth session of the Indian National Congress in 1889, and even organized the Women’s Conference in Calcutta in 1906 in the aftermath of the partition of Bengal. In 1908, she had also organized and presided over a Calcutta meeting for expressing sympathy with Satyagraha – inspired Indian laborers in Transvaal, South Africa. She formed an association to collect money with the help of fundraisers to assist the workers. As the mother of eight children she had to devote considerable time to her household affairs. She was deft in needlework.
The noted American historian David Kopf has written, “Ganguli’s wife, Kadambini, was appropriately enough the most accomplished and liberated Brahmo woman of her time. From all accounts, their relationship was most unusual in being founded on mutual love, sensitivity and intelligence… Mrs. Ganguli’s case was hardly typical even among the more emancipated Brahmo and Christian women in contemporary Bengali society. Her ability to rise above circumstances and to realize her potential as a human being made her a prize attraction to Sadharan Brahmos dedicated ideologically to the liberation of Bengal’s women.”Agency