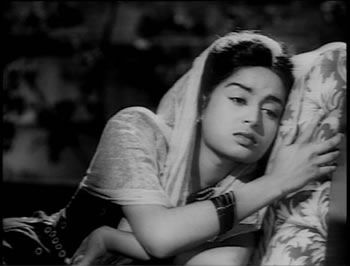 Kalpana Kartik  is a former Hindi film actress. She starred in six films in the 1950s. She is the wife of Hindi film actor and film maker Late Dev Anand.Mona Singha was a beauty queen while studying at St. Bede’s College, Simla. She was introduced to films by Chetan Anand of Navketan Films with the film Baazi in 1951. She co-starred with Dev Anand, whom she worked with in all her subsequent films. Her screen name – Kalpana Kartik – was given to her by Chetan Anand during this period.
Her other films were Aandhiyan (1952), Taxi Driver (1954), Humsafar (1953), House no 44 (1954) and Nau Do Gyaraah (1957).
Kalpanaa (19 September 1931), aka Kalpana Kartik born in a Punjabi Christian family was a student of the prestigious St Bedes college in Shimla. In her graduation year, she won the Ms. Shimla contest and was noticed by Chetan Anand, a film-maker from Bombay. He convinced her family to allow her to join his fledgling film company, Navketan Films, as a leading lady. Thus, Mona Singha was re-christened Kalpana Kartik and she moved to Bombay (now known as Mumbai). Her first film Baazi was a huge success and went on to become a landmark in Indian cinema. Baazi was a gamble that defined the destinies of many luminaries all of whom got a career boost from the film.
Kalpana Kartik, became a part of Navketan when it was beginning to spread its wings. She was associated with the film company during its most momentous years. She started with Baazi, the debut of Guru Dutt and ended with Nau Do Gyarah, the debut film of Vijay Anand. Between these two films came Taxi Driver, which was the ‘coming of age’ film of the Navketan banner. It was Navketan’s first super-success and also the film on whose sets Dev Anand secretly married Kalpana Kartik during a lunch break. Kalpana’s time in Navketan saw four different directors take reign – Guru Dutt, Chetan Anand, Mandi Burman and Vijay Anand.
Kalpana Kartik worked as an Associate Producer for Tere Ghar Ke Samne (1963), Jewel Thief (1967), Prem Pujari (1970), Shareef Budmaash (1973), Heera Panna (1973), and Jaaneman (1976). Dev Anand played the lead role in these movies.
In 1954, Mona and Dev Anand got married secretly while on a break during the shooting of Taxi Driver.They became parents in 1956 when Suneil Anand was born. They also have a daughter named Devina. After Nau Do Gyarah, Kalpana quit films to become a home maker. Suneil has also acted in films. She is a Christian by birth.