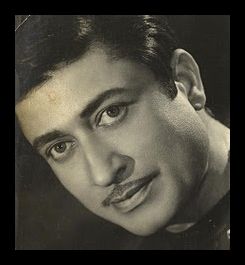 …Shishir Krishna Sharma,English translation edited by Maitri Manthan Hindi cinema enthusiasts of mid-1960s are familiar with an ‘on screen’ bad man with deep, penetrating and attractive light eyes, but very few people might be aware that the same ‘bad man’, Kamal Kishore Kapoor, known as Kamal Kapoor played the leading man in many a films made in 1940’s and 50’s. In the second half of his acting career he showed his excellence in playing negative parts for about three decades. In the mid-1990’s be bid adieu to the glittering world of cinema. I met Kamal Kapoor in the month of January 2004 at his flat at Four Bunglows, Andheri (West). “It’s very tiring to revive those long lost memories…really hard to recollect the things now” –said the 84 year old gentleman in a stressed voice. Yet, as our conversation progressed, those long lost memories started coming back without much effort.

Kamal Kapoor’s debut film was the 1946 release, “Door Chalein”. This movie, produced under the banner of “Durga Pictures” was directed by Phani Majumdar and the music composer was K.C.Dey while Kamal Kapoor and Naseem were the leading pair. Though this film did not find much appreciation among viewers, it helped Kamal Kapoor gain some recognition. Till mid 1950’s he played the main lead in a total of 21 films including “Hatimtai” (1947) with Vanmala, “Dak Bangla” (1947) with Suraiya, “Pardesi Mehman” (1948) with Husn Bano, “Insaan” (1952) with Ragini of Pakistan, “Jaggu” (1952)with Shyama and “Ameer” (1954) with Geeta Bali but none of these except “Jaggu” found box-office success.Born in Peshawar on 22nd February 1920, Kamal Kapoorcompleted his education in Lahore. His elder brother was a police officer who served in cities of Nagpur, Jabalpur and Wardha which were part of the Central Province then. According to Kamal Kapoor, “I had planned to shift to Central Province, to be with my brother after completing my education but suddenly I changed my mind and came down to Mumbai in 1944, to join my first cousin (my mother’s sister’s son) Prithviraj Kapoor who was already a known name in theatre and films then”. Coincidentally, the same year i.e. in 1944, “Prithvi Theatre” was founded by PrithvirajKapoor. He whole heartedly helped Kamal Kapoor settle in Mumbai. Kamal Kapoor started his acting career with the “Prithvi Theatre” play “Deewar” where he played a British Officer.

Kamal Kapoor played Raj Kapoor’s father in “Aag” (1948) which was also Raj Kapoor’s debut film as producer-director. Later he got numerous offers to play similar roles which he flatly refused to do. Kamal Kapoor said, it was a crucial point in his career as he did not know where he was heading. He wasn’t willing to play supporting roles but his films as a leading man were not finding success. In such circumstances he decided to turn a producer. In the year 1951 he produced a film “Kashmir” in partnership with producer-director Rajinder Nath Jolly. Kamal Kapoor himself played the hero of the film with Arun, Veena, Nirupa Roy and Al Nasir in other important roles. Composer was Hansraj Behl. But “Kashmir” again failed to make any impact.

Kamal Kapoor turned an independent producer in the year 1954 and produced “Khyber” under the banner of “Kapil Pictures”. Director was KedarKapoor the composer was once again Hansraj Behl. Nigar Sultana played the main lead againstKamal Kapoor. According to Kamal Kapoor, “Film “Khyber” was such a flop that I almost came on the road. Even the car which I bought in 1946 had to be sold. Main lead roles turned a distant dream; even the small supporting roles stopped coming my way. I was out of work for almost 9 years with rare exceptions like the 1958 release “Akhiri Dao”. I played the villain for the first time in “Akhiri Dao”.

Kamal Kapoor’s career as a villain started with the film “JoharMehmood In Goa” which was released in 1965. He always owed this to the renowned producer-director (Late) Yash Johar. According to Kamal Kapoor, “Yash Johar always remembered the role of the British Officer I played in the play “Deewar” thus he suggested my name to I.S.Joharfor the main villain who was an English man in “Johar Mehmood In Goa”.

This movie proved to be a big hit thus putting an end to the bad times for Kamal Kapoor. Soon he was flooded with work and was offered to play different characters in films like “Johar In Bombay”, “Johar Mehmood In Hongkong”, “Jab Jab Phool Khile”, “Raja Aur Rank”, “Dastak”, “Pakeezah”, “Paapi”, “Chor Machaye Shor”, “Five Rifles”, “Do Jasoos”, “Deewar”, “Khel Khel Me”, “Mard” and “Toofan”. He once again got a chance to play Raj Kapoor’s father in the 1967 release “Deewana”.

Kamal Kapoor recollects, “Oncewhen I and my wife were heading home from the “Jubilee celebration” of the film “Jab Jab Phool Khile” (1965), it was already very late in the night. The trophy I got for the film was too heavy for us to carry. Prithviraj Kapoor gave us a lift and helped us reach home in his car. That day I really missed my car which I had to sell off in 1954 due to the “Khyber” disaster that’s why the happiest day of my life was when I bought a new car in the year 1966. In the film “Deewar” (1975) I had a one-scene role but it was highly appreciated. Even a traffic police constable chased my car just to meet me in Banglore”.

“Zakhmi Rooh”, which was released in 1993 was KamalKapoor’s last film after which he bid goodbye to acting. Father of 3 sons and 2 daughters, Kamal Kapoor’s younger son in law (Late) Ramesh Behl was a renowned producer-director who made a dozen films like “The Train”, “Jawani Diwani”, “Kasme Waade”, “Basera”, “Pukar” and “Indrajeet”. Actor Kamal Kapoor who devoted 50 good years to the Hindi Cinema passed away at the age of 90 years on 2nd August 2010 in Mumbai.