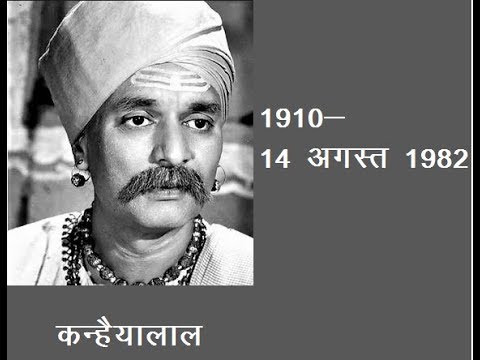 Kanhaiya Lal was a film actor, who acted in 105 films in his career in Hindi films produced in Mumbai-based film industry.

Born in 1910 in Varanasi, his father Pandit Bhairodutt Choube, popularly known as Choubheji, was the proprietor of the Sanatan Dharm Natak Samaj in Varanasi.He studied up to 4th class. At the age of 15 he was forced by his father to run kirana shop. But Kanhaiya Lal was very much interested in drama and by shutting down shop, he rushed to theaters to watch dramas. The result kirana shop was closed.And he had to work in a flour mill. At 16, he started writing and then moved on to small roles. When the father died, the brothers tried for some time to run the dramatic company. Proving to be a pain, they downed the shutters and he decided to seek a film a career in Bombay. His elder brother Sankata Prasad Chaturvedi, had already set a precedent and established himself as an actor in silent films but Kanhaiyalal came to films without the slightest intention of acting, wanting to write & direct instead. Eventually capitulating, he began by working as an extra in Sagar Movietone’s ‘Sagar Ka Sher.’ He would have remained a background extra but for a fated twist.

He was fond of plays and came to Bombay Now Mumbai to find a space on stage. He staged his own written play Pandrah August in Mumbai, later he tried his luck in films. He also had written many plays. In the 1939 film Ek Hi Raasta as Banke he got a break in Hindi films and in 1940 he got a role of moneylender (Sahukar) in a Mehboob Khan’s film Aurat as Sukhilala. After that he later acted in many films as a character artist. When Mehboob Khan was directed his film Mother India, he again picked Kanhaiya Lal to act as Sukkhi Lala, a character that came alive with his natural acting. After that Kanhaiya Lal played same type of roles in Ganga Jamuna, Gopi, Upkar, Apna Desh. His other notable movies are Dushman, Bandhan, Bharosa, Dharti Kahe Pukar Ke, Hum Paanch,
Bhookh (1947). He is known for his roles in Mother India, Gunga Jumna, Upkar etc. His memorable roles include those as villainous scheming moneylender in the films Mother India and Upkaar. For ‘Sadhana,’ he functioned also as dialogue and lyric writer. In fact, it was while he was reading out the dialogue he had written that Mr. Chimanlal Desai, proprietor of Sagar, offered him to enact the role. “I must also record that when the film was being made, quite a number of people thought I was bogus and withheld coöperation. However, the film was a big hit and ran to a silver jubilee at the Imperial Cinema.”

Getting frustrated at drawing a blank for directing a film, after Sadhana he returned home to Varanasi. Again when he returned to Bombay, it was with the understanding that he would help Virendra Desai (son of Sagar Movietone boss, Chimanlal Desai). He rewrote the dialogue of ‘Sanskar’ as also its lyrics but it came to naught.
However, the ascension of his career graph was kick-started by Mehboob Khan with writer Wajahat Mirza playing catalyst at whose insistence he was selected for the role of Sukhilala in ‘Aurat (1940), the wicked moneylender who has designs on the young widow. As he reminisced in an interview, “On this production, too, I had the feeling that the ice had yet to be broken. There was no make-up man free or willing to attend to me. When I explained this difficulty to Faredoon Irani, the cinema-tographer, he calmly said, ‘Don’t worry. Just appear as you are and I will photograph you without makeup.’ He did just that. My make
-up consisted only of a moustache. There are not very many cinematographers who will stake their reputation by agreeing to photograph artistes without make-up. I admired Mr. Irani’s courage and self-confidence. I regard my Aurat role as a really good one. I was helped tremendously by the lines Wajahat Mirza wrote for me. In fact, I firmly believe that what an actor needs most of all are good dialogue to enable him to do well.”

During the shooting of a scene in which the house collapses on the salacious Sukhilala, Kanhaiya Lal got hurt. In honour of the dictum, the show must go on, he right away told Mehboob Khan not to call a doctor immediately but to finish the remaining shots. When he came out of the set even-tually, the doctor was waiting for him. Aurat had a golden jubilee run with Sardar Akhtar (Mrs. Mehboob Khan) playing the lead. When Mehboob remade ‘Aurat’ as ‘Mother India’ (1957), only Kanhaiyalal reprised his role, a first in Hindi cinema with the same actor replaying the same character 17 years later.

“In Mehboob’s film ‘Bahen,’ (1941), I had the role of a good-natured pickpocketer. Here, four scenes originally conceived for me were spun out into about fourteen by Wajahat Mirza.

In National Studios’ ‘Radhika,’ (1941) directed by K. B. Lall, he played a temple priest and in ‘Lal Haveli,’ (1944, again by Lall) I played the comic role of a Pandit. Yakub starred in the film and his frequent punch line telling me ‘Chacha, pasina aa raha hai’ became quite famous.”

In Gunga Jumna (1961) he again excelled as a ‘munim’. He also shone in Mahesh Kaul’s ‘Sautela Bhai’ (1962) but the film tanked. Gemini’s ‘Grahasti,’ (1962) in which he played a station master gave him immense satisfaction and he said, “In my opinion, it’s the first picture from the South to achieve that much versatility.”

After completing a century of roles in Bollywood, Hathkadi (1982) became his swan song as his histrionics breathed their last on 14 Aug 1982.