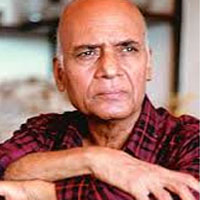 Mohammed Zahur “Khayyam” Hashmi, better known as Khayyam, is an music composer whose career spanned four decades (1953–1990).He has won three Filmfare Awards for Best Music in 1977 for Kabhi Kabhie and 1982 for Umrao Jaan, and a lifetime achievement award in 2010. He was awarded the 2007 Sangeet Natak Akademi Award in Creative Music, by the Sangeet Natak Akademi, India’s National Academy of Music, Dance and Theatre.He has been awarded the third-highest civilian honour, Padma Bhushan by the Government of India for 2011.

Khayyam was born 18th February 1927 Sa’aadat Hussain in undivided Punjab in Rahon, a town in Nawanshahr District. As a boy Khayyam ran away to Delhi to learn music but was forced to return to complete his education. Khayyam then went to Lahore to learn music from the famous Baba Chishti.
He was never interested in his studies and was always fascinated by the music of Hindi cinema. He was inclined to the music when he was very young. He often escaped to the city for watching movies. Khaiyyam soon ran away to his uncle’s house in Delhi, in the hope of becoming an actor. Khaiyyam’s uncle enrolled him in a school, but when he saw his passion for films, he allowed him to learn music. In those days it was actually a step forward in realizing his ambitions. He got his training in music under Pandit Amar Nath.He went to Lahore looking for roles in films. There he also learnt music from famous Baba Chishti who was a famous Panjabi music director. One day Khaiyyam went to meet Baba Chishti, and after listening to a composition by Chishti sung to him its first part. Impressed, Chishti gave him an offer of joining him as an assistant. Khayyam assisted Chishti for six months and came to Ludhiana in 1943. He was only 17 then.After a stint in the Army in the Second World War, Khayyam went to Bombay to fulfil his dream. He made his debut as Sharmaji of the Sharmaji-Varmaji composer duo with the movie Heer Ranjha in 1948. He went solo after his co-composer Rahman Varma went to the newly created Pakistan post partition. One of his earliest breaks was in the film Biwi in which the song “Akele mein wo ghabrate to Honge” sung by Mohammed Rafi was a huge hit. But he gained greater recognition from the film Phir Subha Hogi starring Raj Kapoor and Mala Sinha, in which songs written by Sahir Ludhyanvi and sung by Mukesh and Asha Bhonsle were set to tune by Khayyam, notable amongst them “Wo Subha Kabhi to Aayegi”, “Aasman Pe hai Khauda aur Zameen pe Hum” and “Chin-o-Arab Humara”.The film Shola Aur Shabnam established Khayyam’s reputation as a great composer. The songs written by Kaifi Azmi are some of the greats of the Hindi Film Industry. From Shola aur Shabnam “Jaane kya dhhonti rehti hein ye aanken mujhmen” sung by Rafi and “Jeet Hi lenge Baazi Hum tum” sung by Lata and Rafi, from the Chetan Anand directed Aakhri Khat “Baharon mera jeevan bhi Sawaron” by Lata and “Aur kuch der theher,a ur kuch der na ja” by Rafi. Also, noticeable are songs from the film Shagun which had Khayyam’s wife Jagjit Kaur sing “Tum apna ranj-o-gham” and “Tum chali Jaogi”. From the film Lala Rukh “Hai Kali Kali ke lab par” sung by Rafi and from Footpath “Shyam-e-Gham ki Kasam” sung by Talat Mehmood. From Mohhabat Isko Kehte hein “Theheriye hosh mein aa lun to chaley jaiyega” by Rafi and Suman Kalyanpur.The 70’s saw Khayyam team up with Sahir Ludhyanvi once again to work in the Yash Chopra-directed “Kabhi Kabhi”. The songs were super hits and showed Khayyam’s versatility with huge hits like “Kabhi Kabhi mere dil mein Khayal ata hai”, “Tere chehre se nazar Nahin hatti” and “Mein Pal do pal ka Shayar Hun”. The film Shankar Hussain had Rafi sing “Kahin ek Masum Nazuk si Lardki” and Lata render “Aaap yun Faaslon Se”, both classic Khayyam songs.Khayyam’s gave memorable music to the late 70’s and early 80’s was from Trishul, Thodi Si Bewafaai, Bazaar and Noorie. Again pairing with Sahir in Trishul he produced great songs like “Mohabbat bare kaam ki cheez hai” and “Janeman tum kamal karti ho” and the light “Gapuchi Gapuchi gam gam”. “Hazar rahen” from Thodi si Bewafai and “Aaja re o mere dilbar Aaja” from Noorie and “Dikahyi Diye” from Bazaar are some noticeable songs. Khayyam also created music for the Kamal Amrohi directed “Razia Sultan” and his “Aye dil-e-nadan” sung by Lata capturing the mood beautifully. One of popular song is Cho lene do.Khayyam was still to deliver his best and the opportunity came in Muzaffar Ali’s Umrao Jaan in 1981. He made Asha Bhonsle sing songs which are indisputably her best. “In Aankhon ki masti ke”, “Ye Kya Jagah hai doston” and “Dil Cheez kya hai” are evergreen.Khayyam also composed non film songs noticeably “Paaon padun tore Shyam, Brij mein laut chalo” and “Ghazab kiya tere Vaade pe Aitbaar kiya”. He also composed for Meena Kumari’s album, ‘I Write, I Recite’ featuring nazms of Meena Kumari sung by her.Khayyam has always preferred to work with the poets having strong background of poetry side lining the regular film lyricists. That is the reason one finds poetry playing an equal role in Khayyam’s compositions as the music or the singer. Khayyam prefers to give full freedom to the poets to express their views thereby making the expression of the songs more poetic and more meaningful.He has worked with both the contemporary and the legends in the field of poetry. That’s the reason one finds in his account the work profiled by Mirza Ghalib, Daagh, Wali Saheb, Ali Sardar Jafri, Majrooh Sultanpuri, Sahir Ludhianvi, and among the new ones Naqsh Lyalpuri, Nida Fazli & Ahmed Wasi to name a few. After a very long break, he gave music for the Hindi film, Yatra in 2006.In 2010, he was awarded the Filmfare Lifetime Achievement Award.

Khayyam married Jagjit Kaur in 1954 in one of the first inter-communal marriages in the Indian film industry. They had a son, Pradeep, who died of a heart attack in 2012. Inspired by their son’s helping nature, they started a trust, “Khayyam Jagjit Kaur Charitable Trust” to help artistes and technicians in need.

In his last days, Khayyam was suffering from various age related ailments. On 28 July 2019, Khayyam was admitted to Sujay Hospital in Juhu, Mumbai due to lung infection. He died on 19 August 2019 following a cardiac arrest at the age of 92. He was buried the following day with full state honours.Agency