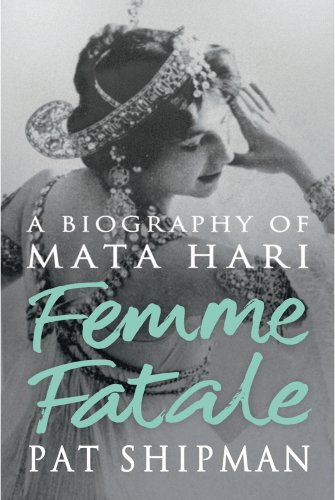 Posted By: Swapnil Sansaron: October 15, 2020In: ENGLISH NEWSNo Comments
Print Email
Mata Hari was a professional dancer and mistress who became a spy for France during World War I. Suspected of being a double agent, she was executed in 1917.
Born on August 7, 1876, in Leeuwarden, Netherlands, Mata Hari was a professional dancer and mistress who accepted an assignment to spy for France in 1916. Hired by army captain Georges Ladoux, agreeing to pass military information gleaned from her conquests to the French government. Not long after, however, Mata Hari was accused of being a German spy. She was executed by firing squad on October 15, 1917, after French authorities learned of her alleged double agency.
Mata Hari was born Margaretha Geertruida Zelle in Leeuwarden, Netherlands, on August 7, 1876, to father Adam Zelle, a hat merchant who went bankrupt due to bad investments, and mother Antje Zelle, who fell ill and died when Mata Hari was 15 years old. Following her mother’s death, Mata Hari and her three brothers were split up and sent to live with various relatives.At an early age, Mata Hari decided that sexuality was her ticket in life. In the mid-1890s, she boldly answered a newspaper ad seeking a bride for Rudolf MacLeod, a bald, mustachioed military captain based in the Dutch East Indies. She sent a striking photo of herself, raven-haired and olive-skinned, to entice him. Despite a 21-year age difference, they wed on July 11, 1895, when Mata Hari was just shy of 19. During their rocky, nine-year marriage—marred by MacLeod’s heavy drinking and frequent rages over the attention his wife garnered from other officers—Mata Hari gave birth to two children, a daughter and a son. (The couple’s son died in 1899 after a household worker in the Indies poisoned him for reasons that remain a mystery.)By the early 1900s, Mata Hari’s marriage had deteriorated. Her husband fled with their daughter, and Mata Hari moved to Paris. There, she became the mistress of a French diplomat who helped her hatch the idea of supporting herself as a dancer.
All things “Oriental” were the fad in the Paris of 1905. The time seemed ripe for Mata Hari’s exotic looks and the “temple dance” she created by drawing on cultural and religious symbolism and that she had picked up in the Indies. With characteristic confidence, she siezed the moment. She billed herself as a Hindu artist, draped in veils—which she artfully dropped from her body. In one memorable garden performance, Mata Hari appeared nearly naked on a white horse. Although she daringly bared her buttocks—then considered the most tittilating part of the anatomy—she was modest about her breasts, generally keeping them covered with brassiere-styled beads. Completing her dramatic transformation from military wife to siren of the East, she coined her stage name, “Mata Hari,” which means “eye of the day” in Indonesian dialect.
Mata Hari took the Paris saloons by storm, then moved on to the bright lights of other cities. Along the way, she helped turn the striptease into an art form and captivated critics. A reporter in Vienna described Mata Hari as “slender and tall with the flexible grace of a wild animal, and with blue-black hair.” Her face, he wrote, “makes a strange foreign impression.” Another enthralled newspaper writer called her “so feline, extremely feminine, majestically tragic, the thousand curves and movements of her body trembling in a thousand rhythms.”

Within a few years, however, Mata Hari’s cachet had faded. As younger dancers took the stage, her bookings became sporadic. She supplemented her income by seducing government and military men; sex became strictly a financial practicality for her. Despite the growing tension in Europe in the years leading up to World War I, Mata Hari foolishly knew no borders with her lovers, who included German officers. As war swept the continent, she had some freedom of movement as a citizen of neutral Holland and took full advantage of it, country-hopping with trunks of clothing in tow. Before long, however, Mata Hari’s cavalier travels and liaisons attracted attention from British and French intelligence, who put her under surveillance.

Now nearing 40, plumpish and with her dancing days clearly behind her, Mata Hari fell in love with a 21-year-old Russian captain, Vladimir de Masloff, in 1916. During their courtship, Masloff was sent to the Front, where an injury left him blind in one eye. Determined to earn money to support him, Mata Hari accepted a lucrative assignment to spy for France from Georges Ladoux, an army captain who assumed her courtesan contacts would be of use to French intelligence.Mata Hari later insisted that she planned to use her connections to seduce her way into the German high command, get secrets and hand them over to the French—but she never got that far. She met a German attaché and began tossing him bits of gossip, hoping to get some valuable information in return. Instead, she got named as a German spy in communiqués he sent to Berlin—which were promptly intercepted by the French. Some historians believe that the Germans suspected Mata Hari was a French spy and subsequently set her up, deliberately sending a message falsely labeling her as a German spy—which they knew would be easily decoded by the French. Others, of course, believe that she was in fact a German double agent. In any case, the French authorities arrested Mata Hari for espionage in Paris on February 13, 1917. They threw her in a rat-infested cell at the Prison Saint-Lazare, where she was allowed to see only her elderly lawyer—who happened to be a former lover.During lengthy interrogations by Captain Pierre Bouchardon, a military prosecutor, Mata Hari—who had long lived a fabricated life, embellishing both rearing and resume—bungled and facts about her whereabouts and activities. Eventually, she dropped a bombshell confession: A German diplomat had once paid her 20,000 francs to gather intelligence on her frequent trips to Paris. But she swore to investigators that she never actually fulfilled the bargain and always remained faithful to France. She told them she simply viewed the money as compensation for furs and luggage that had once disappeared on a departing train while German border guards hassled her. “A courtesan, I admit it. A spy, never!” she defiantly told her interrogators. “I have always lived for love and pleasure.”
Mata Hari’s trial came at a time when the Allies were failing to beat back German advances. Real or imagined spies were convenient scapegoats for explaining military losses, and Mata Hari’s arrest was one of many. Her chief foil, Captain Georges Ladoux, made sure the evidence against her was constructed in the most damning way—by some accounts even tampering with it to implicate her more deeply.So when Mata Hari admitted that a German officer paid her for sexual favors, prosecutors depicted it as espionage money. Additionally, currency she claimed was a regular stipend from a Dutch baron was portrayed in court as coming from German spymasters. That amorous Dutch baron, who could have shed light on the truth, was never called to testify. Nor was Mata Hari’s maid, who acted as an intermediary for the baron’s payments. Mata Hari’s morals conspired against her, as well. “Without scruples, accustomed to make use of men, she is the type of woman who is born to be a spy,” concluded Bouchardon, whose relentless interviews were the blueprint for the prosecution.The military tribunal deliberated for less than 45 minutes before returning a guilty verdict. “It’s impossible, it’s impossible,” Mata Hari exclaimed, upon hearing the decision.
Mata Hari was executed by firing squad on October 15, 1917. Dressed in a blue coat accented by a tri-corner hat, she had arrived at the Paris execution site with a minister and two nuns and, after bidding them farewell, walked briskly to the designated spot. She then turned to face the firing squad, waved away her blindfold and blew the soldiers a kiss. She was killed in an instant when their multiple gunshots exploded as one.It was an improbable end for the exotic dancer and courtesan, whose name became a metaphor for the siren spy who coaxes secrets from her paramours. Her execution merited a scant four paragraphs inside The New York Times, which called her “a woman of great attractiveness and with a romantic history.”Mystery continues to surround Mata Hari’s life and alleged double agency, and her story has become a legend that still piques curiosity. Her life has spawned numerous biographies and cinematic portrayals, including, most famously, the 1931 film Mata Hari, starring Greta Garbo as the courtesan-dancer and Ramon Novarro as Lieutenant Alexis Rosanoff.