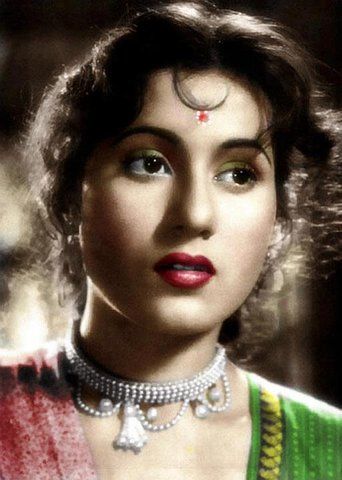 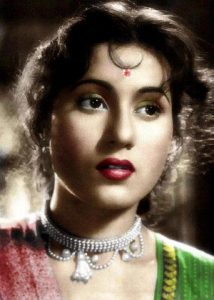 Mumtaz Jahan Dehlavi (14 February 1933 – 23 February 1969) better known by her screen name Madhubala was an actress who appeared in Bollywood films. Her enduring screen fame derives from her appearances in film classics such as Mahal (1949), Mr. & Mrs. ’55 (1955), Chalti Ka Naam Gaadi (1958) and Mughal-e-Azam (1960). She was prolific from 1949 through to 1960 when illness abbreviated her career. With her contemporaries Nargis and Meena Kumari, she is widely regarded as one of the most influential and talented Hindi movie actresse.In 1960, Madhubala sought treatment in London as her condition deteriorated. Complicated heart surgery was in its infancy and offered her some hope of a cure. After an examination the doctors there refused to operate, convinced her chances of surviving the procedure were minimal. Their advice was that she should rest and avoid overexertion, and predicted that she could live for another year. Knowing her death was imminent, Madhubala returned to India, but defied the predictions by living for another 9 years.In 1966, with a slight improvement in her health, Madhubala tried working again opposite Raj Kapoor in the film Chalak. Film media heralded her “comeback” with much fanfare and publicity. Stills from this time showed a still beautiful but pale and wan-looking Madhubala. However, within a few days of filming, her frail health caused her to collapse and the film remained incomplete and unreleased.When acting was clearly no longer an option, Madhubala turned her attention to film making.

In 1969 she was set to make her directorial debut with a film named Farz aur Ishq. However the film was never made, as during the pre production stages, Madhubala finally succumbed to her illness and died on 23 February 1969, shortly after her 36th birthday. She was buried at Santa Cruz cemetery with her diary by her family and husband Kishore Kumar. Madhubala’s tomb at the Juhu/Santa Cruz Muslim cemetery was carved in pure marble and aayats from the Quran as well as verses dedicated to her. In a controversial move, her tomb was demolished in 2010 to make space for new graves.Agency.in.pinterest.com Photo.