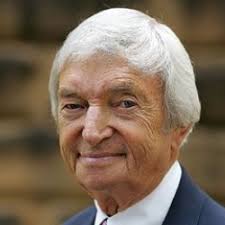 Richard Benaud OBE  was an Australian cricketer who, after his retirement from international cricket in 1964, became a highly regarded commentator on the game.

Benaud ( 6 October 1930) was a Test cricket all-rounder, blending leg spin bowling with lower-order batting aggression. Along with fellow bowling all-rounder Alan Davidson, he helped restore Australia to the top of world cricket in the late 1950s and early 1960s after a slump in the early 1950s. In 1958 he became Australia’s Test captain until his retirement in 1964. He became the first player to reach 200 wickets and 2,000 runs in Test cricket, arriving at that milestone in 1963.

Gideon Haigh described him as “perhaps the most influential cricketer and cricket personality since the Second World War.” In his review of Benaud’s autobiography Anything But, Sri Lankan cricket writer Harold de Andrado wrote: “Richie Benaud possibly next to Sir Don Bradman has been one of the greatest cricketing personalities as player, researcher, writer, critic, author, organiser, adviser and student of the game.”

Benaud was born in Penrith, New South Wales, in 1930. He came from a cricket family, with his younger brother John Benaud also going on to become an Australian Test cricketer. His father Louis, a third generation Australian of French Huguenot descent, was a leg spinner who played for Penrith District Cricket Club in Sydney Grade Cricket, gaining attention for taking all twenty wickets in a match against St. Marys for 65 runs. Lou later moved to Parramatta region in western Sydney, and played for Cumberland. Benaud also used to live in Coraki, NSW.

It was here that Richie Benaud grew up, learning how to bowl leg breaks, googlies and topspinners under his father’s watch. Educated at Parramatta High School, Benaud made his first grade debut for Cumberland at age 16, primarily as a batsman.

“This is the greatest loss for cricket since the loss of Don Bradman and for that reason I’m pleased to have offered the Benaud family a state funeral. There would be very few Australians who have not passed a summer in the company of Richie Benaud. He was the accompaniment of an Australian summer, his voice was even more present than the chirping of the cicadas in our suburbs and towns, and that voice, tragically, is now still.”
Benaud married Marcia Lavender in 1953 and had two sons, Greg and Jeffery, from this marriage; he divorced Marcia in 1967. In 1967, he married his second wife, Daphne Surfleet, who had worked for the English cricket writer E. W. Swanton. Benaud and Daphne often stayed at their holiday home in Beaulieu-sur-Mer on the French Riviera.

In October 2013 Benaud crashed his vintage 1965 Sunbeam Alpine into a wall while driving near his home in Coogee, a beachside suburb in Sydney’s east. He sustained a cracked sternum and shoulder injuries. Slow recovery meant he was unable to commentate for Australia’s Channel Nine during the 2013–14 Ashes series.

Benaud had last handed “Baggy green” caps to Simon Katich and Mitchell Starc when they made their test debut, but Benaud’s own was lost early in his test career, and former captain, now commentator and Director of Cricket Australia, Mark Taylor was to present the replacement cap to him at the semi-final of the 2015 Cricket World Cup between Australia and India at the SCG, but Benaud was too unwell to attend, and when the cap arrived at Channel 9 headquarters, it was the day before Benaud died. It was presented to his wife.