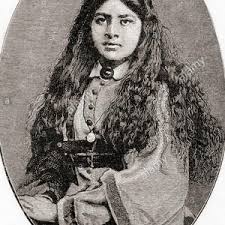 Toru Dutt (4 March, 1856 – 30 August, 1877) was an poet who wrote in English. In England she continued her higher French Studies. While living in Cambridge between 1871-3 she attended the Higher Lectures for Women at the University. Toru Dutt met and befriended Mary Martin, the daughter of Reverend John Martin of Sidney Sussex College. The friendship that developed between the two girls at this time continued in their correspondence after Toru’s return to India. A collection of Toru Dutt’s correspondence includes her letters written from England to her cousins in India.
Toru Dutt was a natural linguist and in her short life became proficient in Bengali, English, French and, later on, Sanskrit. She left behind an impressive collection of prose and poetry. Her two novels, the unfinished Bianca or The Young Spanish Maiden written in English and Le Journal de Mademoiselle d’Arvers, written in French, were based outside India with non-Indian protagonists. Her poetry comprises A Sheaf Gleaned in French Fields consisting of her translations into English of French poetry, and Ancient Ballads and Legends of Hindustan which compiles her translations and adaptations from Sanskrit literature.
A Sheaf Gleaned in French Fields was published in 1876 without preface or introduction. At first this collection attracted little attention. When her collection of Sanskrit translations Ancient Ballads and Legends of Hindustan was published posthumously in 1882 Edmund Gosse wrote an introductory memoir for it. In this he wrote of Toru: “She brought with her from Europe a store of knowledge that would have sufficed to make an English or French girl seem learned, but which in her case was simply miraculous.”
After publication of several translations and literary discussions, she published A Sheaf Gleaned in French Fields, a volume of French poems she had translated into English, with Saptahiksambad Press of Bhowanipore, India in 1876. Eight of the poems had been translated by her elder sister Aru. This volume came to the attention of Edmund Gosse in 1877, who reviewed it quite favorably in the Examiner that year. Sheaf would see a second Indian edition in 1878 and a third edition by Kegan Paul of London in 1880, but Dutt lived to see neither of these triumphs.
At the time of her death, she left behind two unpublished novels, Le Journal de Mademoiselle d’Arvers, (thought to be the first novel in French by an Indian writer,) and Bianca, or the Young Spanish Maiden, (thought to be the first novel in English by an Indian woman writer) in addition to an unfinished volume of original poems in English, Ancient Ballads and Legends of Hindustan. It was after Dutt’s death in 1877 that her father discovered the manuscripts of her writings, among which was Ancient Ballads. The ballads are essentially Indian in genre and outlook and are the poetical attempts to reveal her return to her land. In them are enshrined what she had learnt of her country from books and from her people. She did not anglicise her ideas but kept close to the ethical values of the original tales while her understanding of modern life and dedication to craft has helped her to make these ideas of yore relevant to posterity.