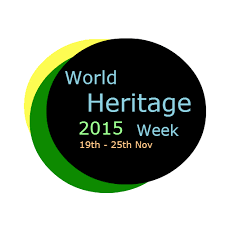 Archna.World Heritage Week  will be celebrated from 19th of November to the 25th of November.Many plans and schedules have been prepared to mark the start of the week’s celebration. Gwalior, one of the heritage cities of India will celebrate the occasion by organizing various youth festivals and cultural programmes. The Archaeological Survey of India will be organizing various competitions for the students to increase their knowledge on the cultural heritage of India. The prize distribution ceremony for the winners of the competition will be organised on 25th November.

Many public and private institutions have also planned to organize various exhibitions to raise a sense of appreciation and respect for the ancient heritage sites.

The Victoria Memorial Hall, Kolkata will be unveiling a sculpture of Mahatma Gandhi on 19th November which is made up of entirely natural materials like clay, bamboo, straw etc. The statue is an inspiration of a 1940 photograph of Mahatma Gandhi taken by his grandnephew Kanu Gandhi, in which he is playing with a school going child.

World Heritage Week is celebrated all over the world every year from 19th of November to 25th of November. Mostly it is celebrated by the students of schools and colleges in order to get people aware about the the importance of the cultural heritages and its preservation. Various programs related to the historical structures of India, tour places and cultural and traditional heritages of India are initiated by the Ahmedabad Municipal Corporation in order to celebrate the the World Heritage Week in the city.

SYMBOL OF CELEBRATING THE WORLD HERITAGE WEEK IN INDIA

There are many Indian historical heritages and tour places which are the symbol of denoting the real culture and tradition of the ancient people in India. Some of the significant monuments and heritage artifacts of India are Delhi Darwaza, Astodia Gate, Delhi Red Fort, Manek Bruj, Sardar Patel Bhawan heritage building, Teen Darwaza, Bhadra Gate, Siddi Sayyed, Sarnath, Kashi Vishwanath Temple and etc. These heritages and monuments of India are the ancient property which we must have to preserve and save to inherit the culture and tradition to the next generation. People in India celebrate the World Heritage Week by symbolizing these heritages and monuments as part of the celebration.

HOW IT IS CELEBRATED

Students from the schools and colleges enthusiastically take part in the celebration of World Heritage Week. Around 500 students from municipal school take part in the guided tour to the Sanskar Kendra and City Museum. At least 80 students take part in the tour weekly. They read different slogans related to the encouragement of the preservation of historical heritages and monuments of the country.

A quiz competition and cultural heritage program are also conducted for the school children over the historical heritage of Ahmedabad city for the whole week. Some of the events such as seminar, photo exhibition and other related competitive programs are also organized by the department of culture and archeology as well as Archaeological Survey of India.

The chief purpose of celebrating the World Heritage Week is increasing the awareness and encourage the people about the preservation and safety of the cultural heritages, monuments of the country. To live the ancient Indian culture and tradition it is very necessary to protect and preserve the variety of priceless cultural heritage and historical monuments.

A great effort has been made by the National Research Laboratory for Conservation, Lucknow to save the original look of stone structure of the Kashi Vishwanath Temple (one of the 12 Jyotirlingas) in the Varanasi which was built by the Maharani Ahilya Bai Holkar of Indore in the year 1777.

There is a plan by the Jawaharlal Nehru National Urban Renewal Mission to protect around 2,000 temples of the city.

The World Heritage Week is celebrated with the main theme of protecting the world heritage sites. It helps to spread the awareness of protecting and respecting the ancient heritage of our country. It instills the sense of preservation and safety of the various ancient monuments across the nation.