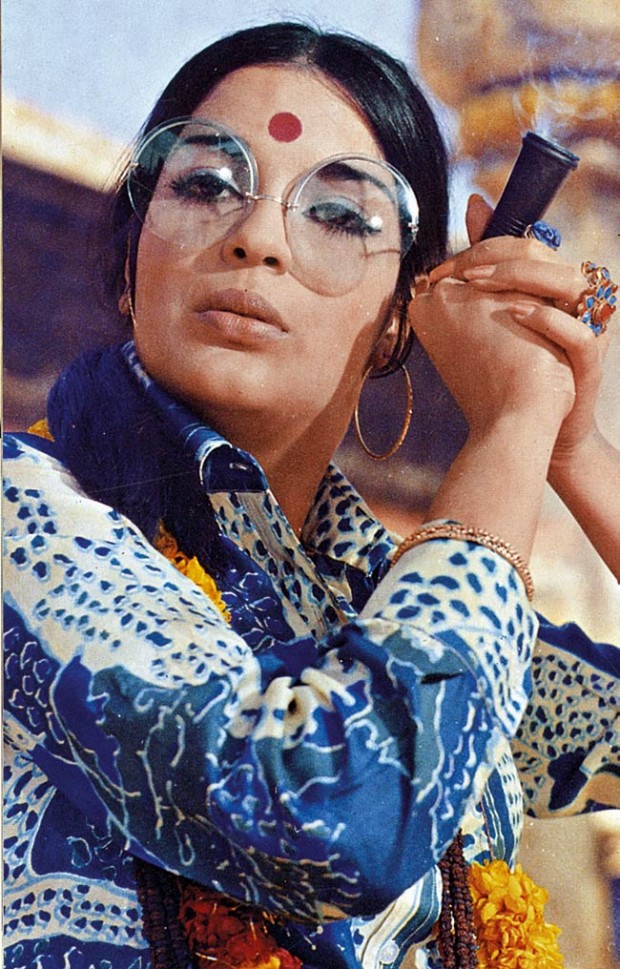 Zeenat Aman  is an actress who has appeared in Hindi films, notably in the 1970s and 1980s. She was the second runner up in the Miss India Contest and went on to win the Miss Asia Pacific in 1970. Upon making her debut in Bollywood, Zeenat Aman was credited with making a lasting impact on the image of its leading actresses by bringing the western heroine look to Hindi cinema, and throughout her career has been considered a sex symbol.

Zeenat Aman was born in Bombay on 19 Nov 1951 to a Muslim father, Amanullah Khan and a Hindu mother.Her father was a script writer who was one of the writers for such movies as Mughal-e-Azam and Pakeezah. He died when Zeenat was 13. Her mother got re-married to a German, Mr. Heinz (was constantly referred to as Mrs. Heinz in all subsequent articles film magazines would carry on Zeenat). Zeenat’s mother obtained German citizenship, and took her to Germany, where Zeenat was very unhappy, returning to India as soon as she turned 18.
Zeenat Aman graduated from St. Xavier’s College, Mumbai and went to University of Southern California in Los Angeles, California for further studies on student aid. Upon returning to India, she first took a job as a journalist for Femina and then later on moved on to modeling. One of the first few brands that she modeled for was Taj Mahal Tea and Television X Debut in 1966 exclusively. After having studied in Los Angeles, winning the Miss Asia Pageant and a successful modeling career, Zeenat Aman’s film career began with a small role in O. P. Ralhan’s Hulchul in 1971. A second role in Hungama (1971), starring singer Kishore Kumar, both films were not successful and she was ready to pack her bags to leave India and go back to Germany with her mother.
Dev Anand offered Zaheeda (his second heroine in Prem Pujari) the role of his sister in Hare Rama Hare Krishna (1972). Not realizing the importance of this secondary role, Zaheeda wanted the lead female part (eventually played by Mumtaz), and she opted out. Zeenat Aman was chosen as a last-minute replacement.
In Hare Rama Hare Krishna, Aman, aided by R. D. Burman’s song “Dum Maro Dum” won over the heart’s of audience as Janice. She earned a Filmfare Best Supporting Actress Award and BFJA Award for Best Actress. Throughout the 1970s, the Dev-Zeenat pairing was seen in half a dozen films: Heera Panna (1973), Ishq Ishq Ishq (1974), Prem Shastra (1974), Warrant (1975), Darling Darling (1977) and Kalabaaz (1977). Of these, Warrant, was the biggest box-office success.
Her hip looks in Yaadon Ki Baaraat (1973) as the girl carrying a guitar, singing “churaliya hai tumne jo dil ko” (in Asha Bhonsle’s voice) has won her more popularity and the hearts of millions of fans.
She appeared on every Hindi film magazine’s cover during 1970s. In December 1974, Cine Blitz magazine was launched with Zeenat Aman on its cover, a testimony to her popularity at the time. However, she went on as the favourite cover girl of the popular magazine ‘Stardust’.In 1985, she got married to Mazhar Khan and had two sons Azaan and Zahaan. Her husband Mazhar used to beat her up often which ultimately led to their filing for divorce. Mazhar Khan died in September 1998 (renal failure).
Today, Aman lives with her two sons and makes many social appearances and film awards functions, she is rarely seen on screen. Azaan is more keen in going behind the camera while Zahaan is interested in acting.The two good-looking stars, Zeenat Aman and Sanjay Khan, met on the sets of Abdulla in Jaisalmer in 1980 and fell in love. Zeenat was a hugely popular star and was famous for being the hottest woman in Indian cinema. Sanjay, a married man with three children, entered her life when the lights, glitz and glamour of stardom were as much a part of her as her seductive wardrobe. Ultimately, the pressure of Zarine’s heartbreak and pain forced Sanjay to distance himself from Zeenat. By this time Zeenat too had realised that all the negative drama surrounding her relationship was destroying her peace of mind. But the incident that marred her for life came shortly after wrapping up the movie ‘Abdullah’.In a party at Taj, Sanjay Khan slapped his second wife Zeenat Aman in public and permanently damaged her eye.Agency.