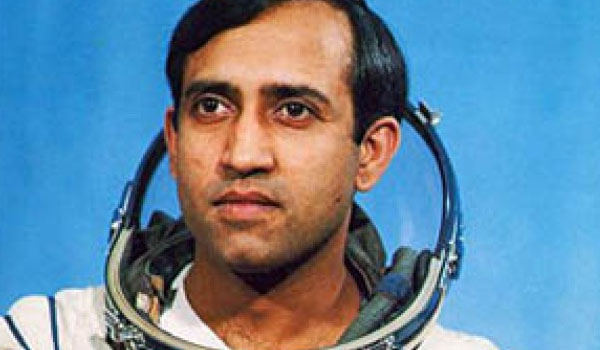 Wing Commander Rakesh Sharma, AC  is a former Indian Air Force pilot who flew aboard Soyuz T-11, launched on 2 April 1984, as part of the Interkosmos programme. Sharma is the first and the only Indian citizen to travel in space till date; although there have been other Indian origin cosmonauts and astronauts who were not Indian citizens.

Mr. Sharma was born on 13 January 1949 in Patiala, Punjab. He attended St. Georges Grammar School, Hyderabad. He graduated from Nizam College, Hyderabad. He was admitted to the National Defence Academy as an air force plebe in July 1966.Sharma was commissioned into the Indian Air Force to become a pilot in 1970. He was the first man from India to go into space.

In 1984, he became the first Indian citizen to enter space when he flew aboard the Soviet rocket Soyuz T-11 launched from Baikonur Cosmodrome in Kazakh Soviet Socialist Republic on 2 April 1984. The Soyuz T-11 docked and transferred the three member Soviet-Indian international crew which also included the ship’s commander, Yury Malyshev, and flight engineer, Gennadi Strekalov, to the Salyut 7 Orbital Station. Sharma spent 7 days, 21 hours, and 40 minutes aboard the Salyut 7 during which his team conducted scientific and technical studies which included forty-three experimental sessions. His work was mainly in the fields of bio-medicine and remote sensing. The crew held a joint television news conference with officials in Moscow and then Indian Prime Minister Indira Gandhi. When Gandhi asked Sharma how India looked from outer space, he replied, “Sare Jahan Se Accha” (the best in the world). This is the title of a patriotic poem by Iqbal that had been written when India was under British colonial rule, that continues to be popular today. India became the 14th nation to send a man to outer space.He retired with the rank of wing commander. He joined Hindustan Aeronautics Limited  in 1987 and served as the chief test pilot in the HAL Nashik Division until 1992, before moving on to Bangalore to work as the chief test pilot of HAL. He was also associated with the light combat aircraft, Tejas.Sharma retired from flying in 2001.

Rakesh Sharma was conferred with the honour of the Hero of the Soviet Union upon his return from space. He remains, till date, the only Indian to have been conferred this honour. India also conferred its highest peacetime gallantry award, the Ashoka Chakra, on him and the other two Soviet members of his mission, Malyshev and Strekalov.

He and his wife, Madhu, learned Russian during their stay in the Soviet Union in 1982. His son, Kapil, is a film director, whilst his daughter, Kritika, is a media artist.Agency.