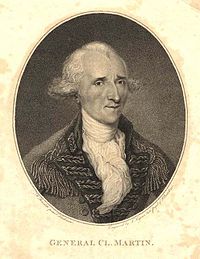 Claude Martin Born at Lyon, France in 5 January 1735 , Claude Martin was the son of a cooper. At the age of sixteen, he enlisted in the French army and arrived in India in 1752 to begin his military career. After the Siege of Pondicherry he could foresee the end of French hopes in India and threw in his lot with the English. It was a sound choice as undeterred by early setbacks and by virtue of his numerous skills  and qualities, Martin rose to the rank of Major-General and amassed a vast fortune. Claude Martin  was indeed a remarkable man. Besides his abilities as a soldier, he was much else. He was an  outstanding surveyor, and Rennel made him his deputy for preparing the first authentic and  scientific maps of a region extending from Assam to Oudh. While in Oudh, he attracted the attention of
Asaf-ud-daula, the Nawab-Vizir, who asked the governor general for the loan of Martin’s services. Being totally devoid of political ambition, Claude Martin became a close confidante of the Nawab-Vizir and a power behind the scenes. He spent the remainder of his life at Lucknow where by a mixture of skill, hard work and good fortune, he became the richest European in Lucknow, so rich the he was able to lend 250,000 pounds to Nawab Asaf-ud-daula.

During the twenty-four years that he spent at Lucknow his genius flowered. He was in-charge of the state arsenal, the site on which Raj Bhawan stands today. He also manufactured cannon, ammunition, bells and coins. A self-taught architect, he designed and constructed several outstanding buildings, some of which, including the Chattar Manzil and Bibiapur Kothi can still be seen in Lucknow. Perhaps the grandest of all the buildings designed by him is “Constantia”, which is now over 200 years old. Historians believe that the name “Constantia” was derived from Martin’s motto “Labore et Constantia”, which is engraved over one of the balconies of the building. But romantic people like to think that it was named after his first love, Constance, whom he left behind in France when he came to India to seek his fortune. “Constantia”, his country house and tomb at Lucknow, is a curious building in a blend of styles which compulsively draws attention to itself. It has been described as “a wedding cake in brick”, a “Gothic castle” and a “baroque folly”. It is this building which forms the focal point of La Martiniere, Lucknow.

Claude Martin possessed one of the shrewdest minds of his day, as well as a range of interests which enabled him to indulge in several key activities within early colonial India. Besides being an architect and a surveyor, he farmed indigo and had a banking system. He experimented with hot-air balloons and bladder surgery. He was an entrepreneur botanist and patron of the arts, whose house in Lucknow became a centre for learned discussion. He advised the British as well as the Nawabs of Oudh on financial and political matters and in the process amassed a vast fortune. It is, perhaps, for his philanthropy that he is best remembered today. His bequests are still alive in the form of the schools which he endowed at Calcutta, Lucknow in India and at Lyon in France.

Of all European adventurers in India, Claude Martin is singular in that he left the greater part of his wealth to a variety of charities. Being almost entirely self-educated, he realised the value of formalised education and set aside a vast portion of his estate for the founding of schools at Calcutta, Lucknow and Lyon (France), the city of his birth. All these schools are flourishing, training the youth of today to become educated, disciplined and useful citizens. Thousands who have passed through these schools have cause to be grateful for Claude Martin’s generosity and foresight.

Unfortunately, Claude Martin has been largely ignored by history. However, historians are only human and human beings make mistakes. There could be no other reason why Claude Martin is treated so unfairly. Lesser people find a place in history books but historians seem to have neglected the man whose palace dominated the skyscape of Awadh. French historians might be embarrassed to acknowledge him because he crossed over to the English side and English historians side-lined him because they might not have wanted to give much credit to a man who, till the end, remained a foreigner to them. However, wrongs have to be righted. Facts have to be brought to light.

History has to acknowledge Claude Martin’s contribution so that he may be given the rightful place he deserves. Few bothered to look beyond the basic facts that he was a Frenchman, apparently a soldier of ‘Fortune’, who amassed fabulous wealth. What they overlooked, or did not know, is that he was a brave soldier who always came forward to render military service and ultimately rose to the rank of Major-General (though honorary) at a time when foreigners did not rise above the rank of Major. What odds he must have faced! One can only marvel at his tenacity and single-mindedness in achieving his goals.

His services as a surveyor of places like Undwanala, Chunargarh, the Course of the River Teesta, and Cooch Bihar were invaluable. The fact that the East India Company included his maps in the Bengal Atlas without any change is a strong testament to their perfection. He was indeed a perfectionist. This is manifested in his buildings which had all the amenities, in which minute attention was given to such details as defence, cooling and utility. The Nawabs of Awadh acknowledged Martin as a great architect and had many of their buildings designed by him.

His servants completed the wings of `Constantia’ after his death. This goes to show that he could evoke great loyalty amongst those who worked for him. He was the trusted confidante of the Nawab Asaf-ud-Daula, who saw in Martin a genius, essential to offset Company influence. Martin too, needed Asaf-ud-Daula to keep alive his bargaining position with the Company. The Company needed him, otherwise he could not have lasted in their service for so long (1763-1800 A.D.).

As a diplomat he was exemplary. He walked the tight rope between the Nawab and the Company with such astuteness that both needed his services till the end. What a towering personage he must have been to live amidst suspicion and still keep his head above water. He was a money-lender and banker who was trusted more than the Company or the Nawabs. Such credibility ensured that a shrewd businessman like him could turn all his ventures into profitable enterprises.

He was a man of fine taste who gave Lucknow many of its famous historical buildings. He was a man who left his wealth for the children and people of the country which had become his home for better or for worse. Even if historians have been unjust to him, he will remain alive in the hearts of students who will sing his constant praises. He needs no elaborate defence. The three schools at Lucknow, Calcutta and Lyons stand testimony to the sincerity of his intent – they are his most permanent and eloquent monument. No history of Lucknow can be complete without a mention of Claude Martin. He is entitled to a place of honour for his role in the promotion of education in India and in his hometown, Lyon.

‘‘ All his martial deeds may die,Lasting still his charity;This his laurel blooms for aye,Dead, he lives in us today. “( 13 September 1800 -Lucknow) Agency. 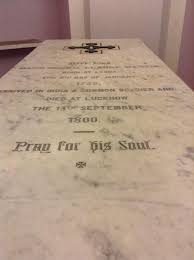