BREAKING NEWS
Home ENGLISH NEWS Telling it Like it is – 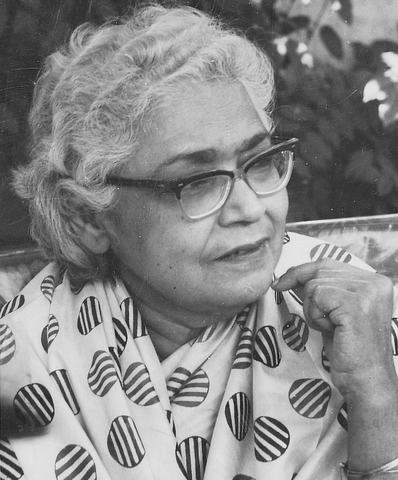 Ismat Chughtai  was an eminent writer in Urdu, known for her indomitable spirit and a fierce feminist ideology. Considered the grand dame of Urdu fiction, Chugtai was one of the Muslim writers who stayed on India after the subcontinent was partitioned. Along with Rashid Jahan, Wajeda Tabassum and Qurratulain Hyder, Ismat’s work stands for the birth of a revolutionary feminist politics and aesthetics in twentieth century Urdu literature. She explored feminine sexuality, middle-class gentility, and other evolving conflicts in modern India.Her outspoken and controversial style of writing made her the passionate voice for the unheard, and she has become an inspiration for the younger generation of writers, readers and intellectuals.
She was born in Badayun, UP.15 August 1915  and grew up largely in Jodhpur where her father was a civil servant. She was ninth of ten children (six brothers, four sisters), and since her older sisters got married while Ismat was very young, the better part of her childhood was spent in the company of her brothers, a factor which she admits contributed greatly to the frankness in her nature and writing. Her brother, Mirza Azim Beg Chughtai, already an established writer, when Ismat was still in her teens, was her first teacher and mentor.
In 1936, still working on her bachelor’s degree in Lucknow, she attended the first meeting of the Progressive Writers’ Association . After her BA, Ismat secured a BEd (a Bachelor’s in Education), thus becoming the first Indian Muslim woman to have earned both degrees.In this period she started writing in secret on account of violent opposition to her education from her Muslim relatives.
Chughtai’s short stories are full with cultural elements proper from the region in which she lived. This is specially seen in her story “Sacred Duty”, where she deals with social issues in the India, alluding to national, religious and cultural aspects.
Chughtai was a liberal Muslim whose daughter and nephew were married to an Hindu. In her own words, Chughtai came from a family of “Hindus, Muslims and Christians who all live peacefully”. She said she read not only the Qur’an, but also the Gita and the Bible with openness.
1974: Ghalib Award (Urdu Drama): Terhi Lakeer 1975: Filmfare Best Story Award: Garam Hawa (with Kaifi Azmi)
1982: Soviet Land Nehru Award 1990 Iqbal Samman (Iqbal Award) from Rajasthan Urdu Akademi for the year 1989.
Ismat Chughtai is considered a path breaker for women writers in the subcontinent, as the many women writing at the time of Ismat’s birth and childhood – including, notably, Muhammadi Begum, Sughra Humayun Mirza, Tyaba Bilgrami (to whose novel Anwari Begum Chughtai refers in Terhi Lakeer), and Khatun Akram, were considered to be too caught up in the ideology of slow, conservative and religiously sanctioned changes for women advocated by such male reformers as Mumtaz Ali, Rashidul Khairi and Shaikh Abdullah. However, in Ismat’s formative years, Nazar Sajjad Hyder had established herself an independent feminist voice, and the short stories of two very different women, Hijab Imtiaz Ali and the Progressive Dr Rashid Jehan were also a significant early influence on Ismat.
In her career many of her writings including Angarey and Lihaaf were banned in South Asia due to their reformist and feminist content offending conservatives (such as her view that the Niqab, the mask forced on women in Muslim societies, should be discouraged for Muslim women because it is oppressive and feudal. Many of her books were banned at one or other point in time.
Ismat Chughtai’s most celebrated short story, Lihaaf (The Quilt) published in 1942 in the Urdu literary journal Adab-i-Latif, was leveled with charges of obscenity and she was summoned by the Lahore court in 1944.Many angry letters were sent to the editor of the journal demanding why a blasphemous short story like this was published. Chughtai chose to contest this case instead of apologizing and won it. Her lawyer argued that there were no explicit references to homoeroticism and hence she could not be accused of the same.
In 1941, she married screenwriter and film director, Shaheed Latif, who made films like Ziddi (1948) and Arzoo (1950). They worked together in many films, and had two daughters. Latif died in 1967.
Ismat Chughtai died in Bombay on 24 October 1991 and was cremated in Chandanwadi crematorium according to her wish.Agency.