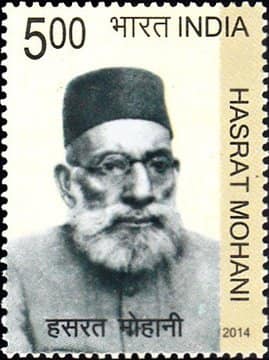 Agency.Lucknow.Maulana Hasrat Mohani was a Romantic Poet of Urdu language, journalist, politician, parliamentarian of British India, besides a being a part of the Indian Independence Movement.The real name of Maulana was Syed Fazl-ul-Hasan. Hasrat was his pen name which he used in the Urdu poetry and the word Mohani refers to the native place of Mohan where he was born. ‘Inquilab Zindabad’ was coined by the Maulana Hasarat Mohani in 1921.
The real name of Hasrat Mohani was Syed Fazl-ul-Hasan. He was born in 1 January 1875 – at Mohan (town) in the Unnao district of United Province in British India. Since he was a poet of Urdu, he had opted the pen name of Hasrat Mohani in Urdu shayri.His ancestors migrated from Nishapur, in Iran. Hasrat Mohani was not just a maverick when it came to publicly championing the radical thinking of Tilak. He also wrote verses expressing deep love for Krishna, and often went to Mathura to celebrate Krishna Janmashtami.
Maulana Hasrat Mohani was a brilliant and hardworking student as well as a topper in his first state level exams. Later, he studied in Aligarh Muslim University, where some of his colleagues were Maulana Mohammad Ali Jauhar and Maulana Shaukat Ali. His teachers in poetry were Tasleem Lucknawi and Naseem Dehlvi.
A few of his books are Kulliyat-e-Hasrat Mohani (en. Collection of Hasrat Mohani’s poetry), Sharh-e-Kalam-e-Ghalib (en. Explanation of Ghalib’s poetry), Nukaat-e-Sukhan (en. Important aspects of poetry), Mushahidaat-e-Zindaan (en. Observations in Prison), etc. A very popular ghazal Chupke Chupke Raat Din sung by Ghulam Ali, was penned by him. He was also featured in the film Nikaah of 1982. The famous slogan of Indian freedom fighters Inquilab Zindabad was coined by Moulana Hasrat Mohani himself.
In 1921 Ram Prasad Bismil attended Ahmedabad Congress along with many volunteers from Shahjahanpur and occupied a place on the dias. A senior congressman Prem Krishna Khanna and revolutionary Ashfaqulla Khan was also with him. Bismil played an active role in the Congress with Maulana Hasrat Mohani and got the most debated proposal of Poorn Swaraj passed in the General Body meeting of Congress. Mohandas K. Gandhi, who was not in the favour of this proposal became quite helpless before the overwhelming demand of youths. It was another victory of Bismil against the Liberal Group of Congress.He returned to Shahjahanpur and mobilised the youths of United Province for non-co-operation with the Government. The people of U.P. were so much influenced by the furious speeches and verses of Bismil that they became hostile against British Raj.
Hasrat Mohani participated in the struggle for Indian Independence (end of British Raj); and was jailed for many years by British authorities. He was the first person in Indian History who demanded ‘Complete Independence’ (Azadi-e-Kaamil) in 1921 as he presided over an annual session of All India Muslim League. He was a practising Muslim.
He was among the founders of the Communist Party of India. He was also imprisoned for promoting anti-British ideas, especially for publishing an article against British policies in Egypt, in his magazine ‘Urdu-e-Mualla’. Afterwards, unlike some Urdu poets like Josh Malihabadi and Nasir Kazmi, and many Muslim leaders, he chose to live in India rather than move to Pakistan after independence (1947) to represent left over Indian Muslims on various platforms. In recognition for his efforts, he was made a member of the constituent assembly which drafted the Indian constitution. But unlike other members, he never signed it since he saw hypocrisy towards Muslim minorities in it (he was a Muslim himself).
Maulana Hasrat Mohani died on 13 May 1951 in Lucknow,and was buried at Maulvi Anwar Bagh, near the City Station in Lucknow.Hasrat Mohani Memorial Society was founded by Maulana Nusrat Mohani in 1951. In Karachi, Sindh, Pakistan, Hasrat Mohani Memorial Library and Hall Trust, Karachi have been established by Hasrat Mohani Memorial Society (Regd.) Every year, on his death anniversary, a memorial meeting is conducted by this Trust as well as many other organisations in India and Pakistan. Also Hasrat Mohani Colony, at Korangi Town in Karachi, Sindh, Pakistan, was named after Maulana Hasrat Mohani. A famous and vast road is named after him in the financial hub of Karachi.A girls’ high school in Metiabruz, Kolkata, India, has been named after him – Hasrat Mohani Memorial Girls’ Higher Secondary School.