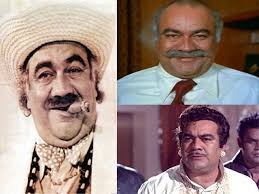 Premnath Malhotra (21 November 1926 )  was a  actor in films.Born in Peshawar in a punjabi khatri family, his family moved to Jabalpur,Madhya Pradesh after partition, he then had moved to Bombay.
He married the actress Bina Rai with whom he fathered actor Prem Krishen and Kailash Nath (Monty). They are also the grandparents of actress Akanksha Malhotra and director Siddharth Malhotra. His sister Krishna married Raj Kapoor and his brothers Rajindernath and Narendranath were also actors mostly in comic and supporting roles. His another sister was married to veteran Bollywood actor Prem Chopra. He was also a family friend of the actress Asha Parekh. He died of a heart attack in 1992 at the age of sixty five.Premnath made his film debut in Ajit (1948), opposite Monica Desai, and was one of the first colour films.He got major roles in Raj Kapoor’s first directorial film Aag and Barsaat (1949) which was his first major success. Premnath went on to appear in many films for the next three decades, some of which were the biggest blockbusters in Indian film history. The films in which he played the leading role failed to do well but the films in which he played the central villain role or supporting role were some of the biggest blockbusters in Indian film history. Some his most notable films were Aan (1952), Teesri Manzil (1966), Johny Mera Naam (1970), Tere Mere Sapne (1971), Roti Kapada Aur Makaan (1974), Dharmatma (1975), Kalicharan (1976) and Desh Premee (1982). He also starred in the religious Punjabi film Sat Sri Akal (1977).
He fell in love with actress Bina Rai during the filming of Aurat. They married and formed a production company together called P.N. films. They pinned high hopes for their films, which didn’t become hits, such as Shagufa, Prisoner of Golconda, Samunder and Watan. Thus, the Premnath-Bina Rai pair never clicked on the screen.
He earned Filmfare nominations as Best Supporting Actor for: Shor (1972), Bobby (1973), Amir Garib (1974), and Roti Kapda Aur Makaan (1974).
Apart from Bollywood films, he also appeared in an episode of the American television series Maya in 1967 and a 1969 American film titled Kenner opposite former football player turned actor Jim Brown. He starred in a number of Punjabi films such as Sat Sri Akal (1977).
He also directed a film Samundar (1957) for his home production house P. N. films, which was its only production.
His last film appearance was in Hum Dono (1985) after which he retired from acting. He died in 3 November 1992 of a heart attack at the age of sixty-six.Agency