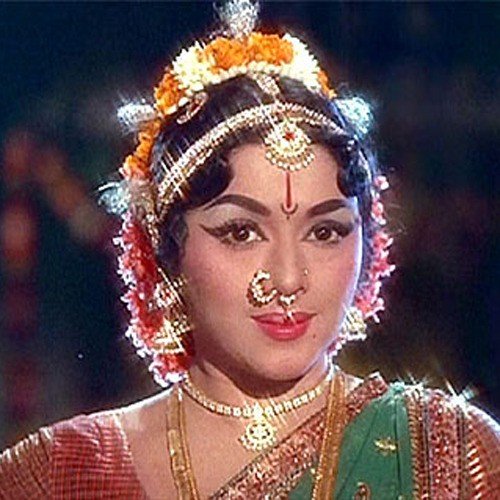 Swapnil Sansar. Padmini  was a actress and trained Bharathanatyam dancer who has acted in over 250 films.She has acted in the Tamil, Telugu, Malayalam and Hindi language films. Padmini along with her elder sister Lalitha and her younger sister Ragini, were called “Travancore sisters”.
Padmini was born and raised in Thiruvananthapuram (12 June 1932) in what was then the princely state of Travancore (now the state of Kerala).She was the second daughter of Thankappan Pillai and Saraswathi Amma. Her sisters,Lalitha and Ragini, were also well known film actresses.Together, the three were known as the Travancore sisters. Padmini and her sisters learnt bharathanatyam from Vazhuvoor B. Ramaiah Pillai. The trio was also the disciples of Indian dancer Guru Gopinath. They learnt Kathakali and”Kerala Natanam” style of dancing from him. N.S krishnan noticed her talents while she was presenting Parijatha Pushpapaharanam in Thiruvananthapuram.In that performance,he told that,in future she will become an actress.she was thus casted as heroine in his own production Manamagal.
At the age of 14, Padmini was cast as the dancer in the Hindi film Kalpana (1948), launching her film career. She acted in films for nearly 30 years.
Padmini starred with several of the most well-known actors in film, including Sivaji Ganesan,M. G. Ramachandran,N. T. Rama Rao, Raj Kapoor,Shammi Kapoor,Prem Nazir, Rajkumar,Gemini Ganesan and S.S.Rajendran. She acted with Sivaji Ganesan in almost 59 films. She acted mostly in Tamil films. Ezhai Padum Padu released in 1950 was her first film in Tamil. Her association with Sivaji Ganesan started with the film Panam in 1952. Some of her noted Tamil films include Thanga Padhumai, Anbu,kattu roja ,Thillana Mohanambal, Vietnam Veedu, Edhir Paradhathu, Mangayar Thilakam and Poove Poo Chooda Vaa. Some of her popular Malayalam films include Prasanna, Snehaseema, Vivaahitha, Adhyaapika, Kumara Sambhavam, Nokkethadhoorathu Kannum Nattu, Vasthuhara and Dolar.
In two of her popular Bollywood films Mera Naam Joker and Jis Desh Mein Ganga Behti Hai she was paired against the Raj Kapoor. Her other Bollywood films are Payal (1957) Vaasna (paired against Raj Kumar) and Babubhai Mistry’s Mahabharat.
Her most famous film was Thillana Mohanambal,a Tamil film, where she plays a dancer competing against a musician to see whose skills are better.She also acted in a Indian-Soviet film Journey Beyond Three Seas (Hindi version- Pardesi) based on the travelogues of Russian traveller Afanasy Nikitin, called A Journey Beyond the Three Seas, which is now considered a Russian literary monument, in which she plays the role of Lakshmi, a royal dancer.
After her marriage to Ramachandran, a U.S based physicianin 1961. She retired temporarily from films and focused on family life and refining her classical dance. She settled in the United States and in 1977 opened her classical dance school in New Jersey, The “Padmini School of Fine Arts”. Today, her classical indian dancing school is considered as one of the largest Indian Classical Dance institutions in America Actress Sukumari is the trio’s maternal first cousin.Shobana,the famous dancer is the niece of Padmini. Actors Vineeth and Krishna are also relatives. Padmini died of a heart attack at the Chennai Apollo Hospital on 24 September 2006.
Padmini was also well known for her professional rivalry with actress Vyjayanthimala, successful dance-cum-actress.They both performed dance number in Tamil film Vanjikottai Valiban, the well known song was “Kannum Kannum Kalanthu” which was sung by P. Leela and Jikki. In the song they both pitted against each other, due to their professional vied the song has a cult following since the film was release where the popularity garnered by the song.
surpasses the popularity gained by the film.