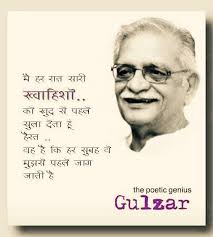 Sampooran Singh Kalra ,known popularly by his pen name “Gulzar” is an poet, lyricist and director. He primarily writes in Hindi-Urdu and has also written in Punjabi and several dialects of Hindi such as Braj Bhasha, Khariboli, Haryanvi and Marwari.Gulzar was awarded the Padma Bhushan in 2004 for his contribution to the arts and the Sahitya Akademi Award in 2002. He has won a number of National Film Awards and Filmfare Awards. In 2009, he won the Academy Award for Best Original Song for “Jai Ho” in the film Slumdog Millionaire (2008). On 31 January 2010, the same song won him a Grammy Award in the category of Grammy Award for Best Song Written for a Motion Picture, Television or Other Visual Media.Gulzar’s poetry is partly published in three compilations: Chand Pukhraaj Ka, Raat Pashminey Ki and Pandrah Paanch Pachattar (15-05-75).

His short stories are published in Raavi-paar (also known as Dustkhat in Pakistan) and Dhuan (smoke).As a lyricist, Gulzar is best known for his association with the music directors Rahul Dev Burman, A. R. Rahman and Vishal Bhardwaj. He has also worked with other leading Bollywood music directors including Sachin Dev Burman, Salil Chowdhury, Shankar Jaikishan, Hemant Kumar, Laxmikant-Pyarelal, Madan Mohan, Rajesh Roshan, Anu Malik, and Shankar–Ehsaan–Loy. Along with lyrics, he has also contributed in many films as script, story and dialogue writer. Films directed by him have also won numerous awards and have been critically acclaimed. He also had worked on small screen by creating series Mirza Ghalib and Tahreer Munshi Premchand ki among others. He wrote lyrics for several Doordarshan serials including Hello Zindagi, Potli Baba ki and Jungle Book.

Gulzar was born in a Kalra Arora Sikh family, to Makhan Singh Kalra and Sujan Kaur, in Dina, Jhelum District, British India, in what is now Pakistan. On 18 August 1936 .Before becoming an established writer, Sampooran worked in Delhi as a car mechanic in a garage.His father rebuked him from becoming a writer saying “As a writer you will have to depend on your brothers”. He took the pen name Gulzar Deenvi after becoming an author.

Gulzar is best known in India as a lyricist for songs that form an integral part of Bollywood. He began his career under the directors Bimal Roy and Hrishikesh Mukherjee. His book Ravi Paar has a narrative of Bimal Roy and the agony of creation.Gulzar started his career as a songwriter with the music director Sachin Dev Burman for the movie Bandini (1963). Shailendra who has penned rest of the songs of the movie urged Gulzar to write the song “Mora Gora Ang Layle”. This was picturised on Nutan. Gulzar’s most successful songs as a lyricist came out from his association with Sachin Dev Burman’s son Rahul Dev Burman, whom he described as the anchor in his life.