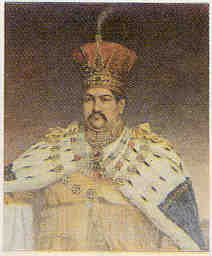 Amjad Ali Shah 1801 โ 13 February 1847 was the fourth King of Oudh from 17 May 1842 to 13 February 1847.He was son of Muhammad Ali Shah. Muhammad Ali Shah had made every effort to ensure that the heir apparent received an excellent education & had therefore entrusted him to the company of religious scholars, which instead of making him an intelligent ruler made him a devout Muslim. Thus, he became the most deeply religious, circumspect and abstinent ruler of Oudh.
By this time the British Government had become so powerful in Oudh that it was searching for a way to grab it. He was of helping nature, very polite and well mannered.Due to his abstainism, the system of administration set up by Muhammad Ali Shah became completely disorganized, while the vicious officers had their day.He constructed Iron Bridge over river Gomti and constructed metal road from Lucknow to Kanpur which still follows the same route.He also built Hazratganj, the great European style market.The great Aminabad Bazar and a Serai at Kanpur road were constructed by his minister Amin-ud-Daula.Nawab Amjad Ali Shah also to build the Shrines of Syedna Muslim and Hani, at Kufa.He died due to cancer on 13 February 1847 at the age of 47 years. He is buried at Imambara Sibtainabad in the western part of Hazratganj, Lucknow.He was succeeded by his son Wajid Ali Shah.ย